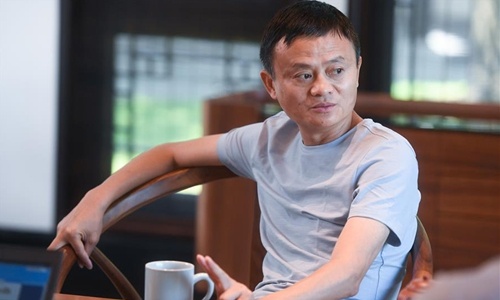 More entrepreneurs from the healthcare sector showed up on the list of China's wealthiest people this year, according to a report issued by the Hurun Research Institute on Tuesday, indicating the country's huge potential in the medical and health industry, experts said.

This year saw the biggest increase in wealth in the 22-year history of the list, with the total wealth of China's rich listers increasing 54 percent to reach $4 trillion, compared with the previous year.

Jack Ma retained the top spot with $58.8 billion for the third year in a row, followed by Pony Ma, who saw his wealth jump 50 percent to $57.4 billion on the back of Tencent's gaming business and the powerful Wechat mobile internet service. Zhong Shanshan, CEO of Nong Fu Spring, ranked third with $53.7 billion.

"China's entrepreneurs have done much better than expected. Despite Covid-19 outbreak they have risen to make new records," Rupert Hoogewerf, Hurun Report Chairman and Chief Researcher told the Global Times on Tuesday.

Notably, healthcare has overtaken real estate to become the second largest source of wealth, contributing to 10.9 percent of the list's total wealth. Manufacturing led with 23.8 percent, whilst real estate dropped to 10.6 percent, down from 14.8 percent in 2019. Within the healthcare sector, 60 percent came from non-traditional healthcare.

"The business of vaccination, personal protective equipment (PPE) and medical equipment such as respirators has gone up dramatically. These are probably the main reason why the healthcare sector has shot up so much," Hoogewerf said.

The report findings showed that Li Jianquan, chairman of face mask maker Winner, saw his wealth grow 11-fold to $5.6 billion, making him the fastest rising star on the list.

An Kang, chairman of antibody drug maker Hualan Bio has more than doubled his wealth to $7.6 billion.

Though international trade has been affected by the coronavirus pandemic, China's medical equipment exports have grown rapidly, and become a new bright spot in the country's foreign trade, experts said.

"China's healthcare and medical industry has grown against the trend amid Covid-19 thanks to its swift response and huge manufacturing power," Cong Yi, a professor with Tianjin University of Finance and Economics told the Global Times on Tuesday.

"As the first country to get the pandemic under firm control and achieve sweeping work resumption, China exported a lot to help the world contain the pandemic, which in turn helped to boost the business of the health industry," he added.

Customs data showed that China's trade volume of medical devices increased 2.98 percent to $26.64 billion in the first half of the year. Exports saw a year-on-year increase of 22.46 percent to $16.31 billion.

From March to September, China exported a total of 151 billion face masks, 1.4 billion items of protective clothing, 230 million protective goggles, 209,000 ventilators and 470 million test kits, according to data from the Chinese Ministry of Commerce.