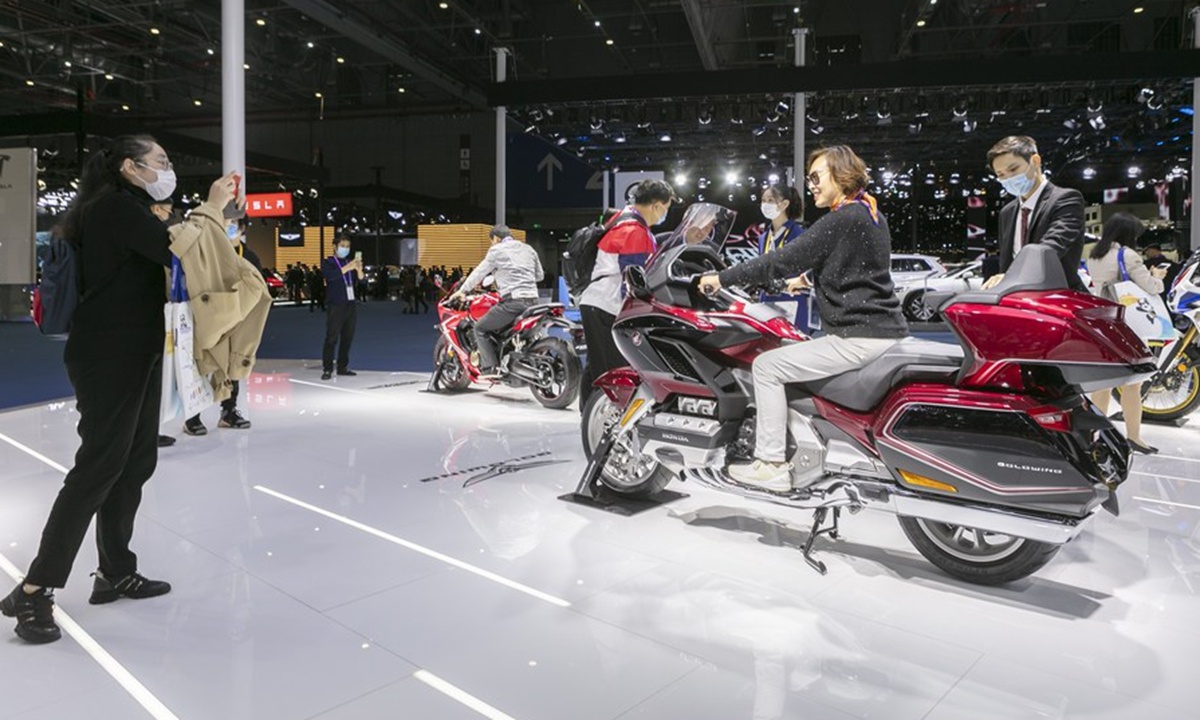 But she and her peers have become part of the mainstay of the nation's vastly huge consumer market for wide-ranging premium items, thanks to greater availability of imported items at more affordable prices, as fueled by a boom in cross-border e-commerce and the national push for wider opening-up which facilitates the likes of Tesla to churn out locally made products.

The rise of China's young spenders - from both bustling metropolises and lesser-known towns - reflects the nation's consumption growth that is behind the stories of foreign successes who are exhibiting their commitment to the market at the ongoing China International Import Expo (CIIE).

Hinging future growth on China's development path that will see domestic and international economic activities reinforcing each other, the foreign business community is hoping for more good days ahead in a market shared by and accessible to all, according to Global Times interviews with senior executives of notable multinational firms on the sidelines of the expo. 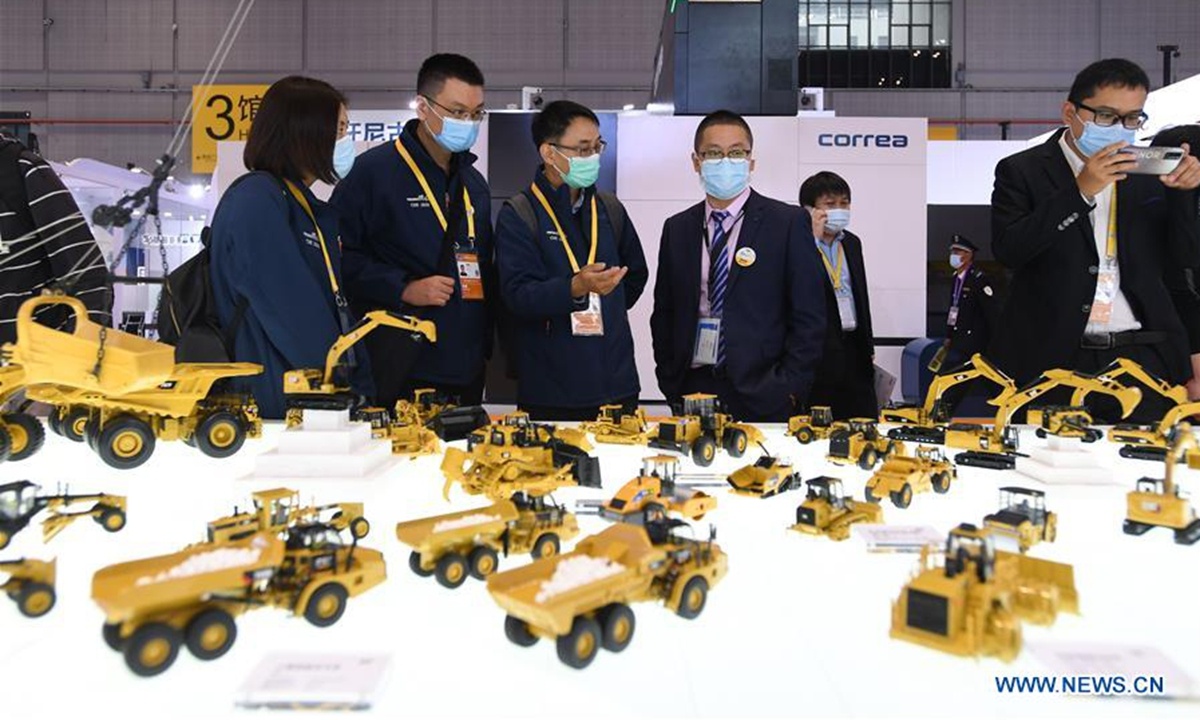 Exhibitors introduce the engineering vehicles at the booth of Caterpillar at the Equipment exhibition area during the third China International Import Expo (CIIE) in Shanghai, east China, Nov. 5, 2020. (Photo: Xinhua)

Guo studied at a university in Beijing and worked for a few years in the capital city before settling down in Xi'an, Northwest China's Shaanxi Province, with her husband.

In the eyes of the 1990-born woman, the western part of China, which has been on board a high-growth bullet train over the past three decades along with the economy's meteoric rise, is not much different from Beijing, in that the pursuit of a quality life is a prevailing trend, as the e-commerce prowess renders new products readily accessible to consumers throughout the country.

A fan of overseas beauty products, Guo always has New York-based skincare brand Estee Lauder on her to-buy list when it comes to eye cream, she told the Global Times on Friday.

"Xinjiang's young people are paying much attention to brand awareness and would opt for better-known brands," she said, pointing to foreign cosmetics brands such as Estee Lauder and L'Oréal gaining popularity among local youngsters.

Nothing can change the pivotal position of the Chinese market in L'Oréal's global strategy, Fabrice Megarbane, CEO of L'Oréal China, told the Global Times, envisioning that China would soon become the beacon for global beauty consumption.

L'Oréal introduced over 100 new and top-selling products to this year's CIIE, its largest presence at the expo.

Unlike Guo who's still childless, 35-year-old Li Wenwen focuses on her 9-year-old son.

LEGO toys are among her top picks, Li told the Global Times, as some of its construction sets, albeit slightly pricy, are considered to help build children's minds, fitting well into a higher demand for toys as her son grows up.

China is now in a stage of rapid development when it comes to toy consumption, as the rise of the middle-income class who yearns for higher quality consumption underpins robust demand for premier products, Paul Huang, senior vice president of LEGO Group and general manager of LEGO China, told the Global Times.

"The Chinese market is huge and there's great potential in second- and third-tier cities," Huang said. The Danish-American toy giant just opened its first certified store in Northwest China's Qinghai Province, where the firm was fairly inspired by local consumers' love for its toys, according to Huang.

LEGO will open 80 new LEGO-branded retail stores across China next year to expand its retail network to 300 outlets in 85 cities, he said, highlighting commitments especially to second- and third-tier cites.

The toy tycoon announced four new sets in celebration of classic Chinese culture and legends, including its newly launched Monkie Kid theme at this year's CIIE, its largest scale of novelty items at the expo since 2018.

China's push for greater openness and a domestic demand-driven economy means an ever-growing market for LEGO, Huang said, expecting the toy firm to benefit substantially from the transition toward being consumption-powered.

Such remarks speak volumes for China's vision to power its economy upon a dual circulation strategy for growth that will spell out wide-ranging opportunities for foreign businesses.

"What we envision is not a development loop behind closed doors, but more open domestic and international circulation. We will do so not only to meet China's own development needs but also for the greater benefit of people in all countries," Chinese President Xi Jinping said in a keynote speech via video at the opening ceremony of the third CIIE on Wednesday, according to the Xinhua News Agency.

China's huge market is the most promising in the world, Xi said, revealing total imports estimated to top $22 trillion over the coming decade. "Our aim is to turn the China market into a market for the world, a market shared by all, and a market accessible to all."

A rising middle class is an important part of China's changing demographics, which makes the case for a surge in demand for wider-ranging consumption with higher quality, experts said, in anticipation of more premium foreign brands to jump into China's consumption bandwagon.

China's lead in equipping the economy with 5G enables much of the cross-border consumption items to reach out to the nation's internet savvy population in a real-time live streaming fashion, carving out a path to emerging consumption models being enjoyed by young people, said Bai Ming, deputy director of the international market research institute at the Chinese Academy of International Trade and Economic Cooperation, a think tank under the Ministry of Commerce.

To reach out to the nation's geographically dispersed consumers, a variety of sales channels, either in-person or online, notably social media and live streaming, are being embraced by the likes of  L'Oréal and LEGO.

In a major push for cross-border e-commerce, Alibaba's Tmall announced earlier this year it would start its first digitalized store for 1,000 overseas brands this year, as part of the Chinese dominant e-commerce site's five-year vision of $200 billion imports.

In its fiscal second quarter ending September 30, Alibaba had 881 million monthly active users, according to the company on Thursday.

Pinduoduo, the Chinese upstart social e-commerce platform which had clashes earlier this year with US electric car giant Tesla over discounted cars, is also expected to see its monthly active users top 700 million for the first time in the third quarter.

Tesla, the hugely popular electric car brand, is also increasingly popular among Guo's peers, although it has yet to be as widely seen on the road in Xinjiang as in Beijing and Shanghai.

There's a conspicuous rebound in the nation's auto market in the post-COVID era, particularly in the market for new-energy cars, which is set to continue to barrel ahead, Tesla global vice president Tao Lin told the Global Times on Friday.

Many of Tesla's stores have been opened in second- and third-tier cities, and even fourth-tier cities, Tao said, noting that the US electric vehicle giant will expand its presence, notably service centers, to cities as soon as these places qualify for its retail network, judging by their population and infrastructure.

Tesla has plans to set up more than 180 experience stores and service centers in over 50 cities in China by the end of 2020.

The increasing availability of the dream car in the eyes of many of Guo's peers, helped by Tesla's localized manufacturing and R&D capabilities, is an essential part of a consumption upgrade being unfolded in the country, she said.