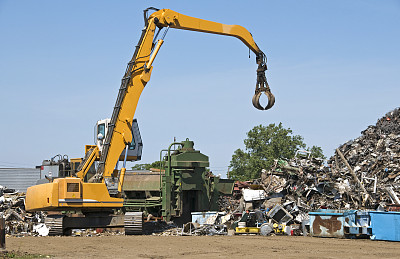 China's exports of steel scrap have surged, with the volume increasing from 1,000 tons in 2016 to 2.20 million tons last year, the Xinhua News Agency reported on Wednesday, citing data from the China Iron and Steel Industry Association.

Industry insiders said that the bulk of the steel scrap exports result from the Chinese government's determination to cut industrial overcapacity and phase out outdated capacity. This policy drive has led to the closure of mills that produce low-quality steel from intermediate frequency furnaces, which are big users of scrap metal, resulting in subdued demand in the domestic market.

As a result, suppliers of about 60 to 70 million tons of steel scrap found that "they have lost the original domestic sales channels and are scrambling to find alternatives in the overseas market" despite an export tariff of 40 percent, she said.

Wang added that the domestic price of steel scrap reached its lowest point in July last year due to the supply glut.

Most of the steel scrap suppliers export the material from South China's Guangdong and Hainan provinces as well as East China's Jiangsu, Zhejiang, and Fujian provinces to neighboring Southeast Asian countries including Indonesia, Vietnam and Thailand, according to the Xinhua report.

"This is a normal market adjustment," Wang said, comparing the scenario to the country's slide in steel exports last year, which she attributed to a rebound in domestic steel prices following a supply shortage.

As more of China's aged buildings and bridges are set to be dismantled, the supply of steel scrap will rise in the next few years, analysts pointed out.

In 2016, China generated 143 million tons of steel scrap, up fourfold from 2002, according to data from the World Steel Association.

But that "does not translate to another sudden hike in steel scrap exports," Wang said, predicting only a mild increase in export volume in the future. She also mentioned the country's development of electric furnace steelmaking, for which about 70 to 90 percent of the raw materials are steel scrap.