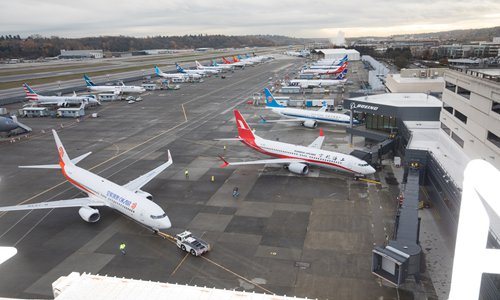 A Boeing delivery center in Seattle, US, shows a bunch of Boeing 737 aircraft to be delivered to Chinese customers on December 6, 2017. Photo: Courtesy of Boeing

In less than a week, two of the world's biggest plane manufacturers, Airbus SE and Boeing Co, unveiled their yearly results for their Chinese businesses, with both companies showing strong confidence in, and determination to serve, the country's ever-growing aviation market.  On Wednesday, John Bruns, president of Boeing China, said the company delivered a record high of 202 aircraft to Chinese airlines in 2017. With 2017's figures now public, the company has confirmed that is has delivered more than 140 aircraft annually to China for the 6th consecutive year, once again surpassing its competitors and becoming the manufacturer to deliver the most aircraft to the country worldwide. Bruns said at a media briefing that the company's global delivery in 2017 was 763, with China accounting for 26 percent of that total. What is more important is that Boeing has achieved 47 units of output per month as a part of its 737 project and has already begun shipping the latest 737MAX model. Of all the 737MAX aircraft shipped in 2017, one-third was delivered to China. But Boeing is not alone when it comes to serving the Chinese market. According to a note sent to the Global Times on January 19, Airbus said that it has delivered over 100 new aircraft annually to its customers in China for eight consecutive years, starting from 2010. As of the end of last year, a total of 1,546 Airbus aircraft were being operated by Chinese mainland airlines, accounting for about half the total number of active aircraft with more than 100 seats worldwide.George Xu, the newly appointed CEO of Airbus China, said, "The Chinese aviation industry is welcoming the new opportunities for development with the rising of a new round of private airlines and the increasing competitiveness of Chinese airlines in the international market." Factories in China The two manufacturing giants now have more joint ventures in China, with the companies making more efforts to make their production more localized.  In May 2017, Boeing made a breakthrough with the establishment of its completion and delivery center for its 737 planes in Zhoushan, East China's Zhejiang Province, jointly established with the Commercial Aircraft Corporation of China Ltd.Bruns said it was one of Boeing's most important events of the year, adding that the project is now well underway and is expected to start delivering 737MAX aircraft by the end of 2018.Also, Boeing celebrated the delivery of its 1 millionth aircraft in 2017 at the Boeing Tianjin Composites headquarters in northern China. AVIC SAC Commercial Aircraft Co completed the delivery of the first 777X components last year, including 777-9 tailplanes, wingtips and sidings. The 777X is the next generation of large, long-range twin passenger aircraft being developed by Boeing and is expected to make its maiden flight in 2019.As for Airbus, its Tianjin assembly line for its A320 aircraft celebrated its 10th anniversary this year. The line had assembled and delivered more than 350 aircraft by the end of 2017, and will achieve its goal of assembling and delivering six per month by 2020.Since 2017, the A320 Tianjin assembly line has been undertaking the final assembly stage of the A320neo series. The line also has the challenging task of delivering the A320 series aircraft to airlines based across the wider Asia-Pacific region. In October 2017, the first A320neo aircraft assembled in Tianjin was delivered to Malaysia's AirAsia.According to a framework agreement signed by Airbus and Chinese partners during French President Emmanuel Marcon's China visit in early January, the assembly line will gradually increase production over time. It is expected that production will reach five aircraft per month by early 2019 and reach six by the beginning of 2020.More deliveries In 2017, China's "big four" airlines - Air China, China Southern Airlines, China Eastern Airlines and Hainan Airlines - received over 20 Boeing 737MAX8s altogether. It is estimated that by the end of 2018, Boeing will have delivered nearly 100 737MAX8s to airlines in China, continuing to support the vigorous growth of the country's civil aviation industry.Meanwhile, Airbus said it delivered 176 aircraft to Chinese customers in 2017, including 141 single-aisle A320 series aircraft and 32 A330 series aircraft, representing about a quarter of the European plane manufacturer's worldwide deliveries over the same period.As China has built a profound high-speed rail network, Bruns believes that it has had a great impact on short-distance transportation - less than 500 kilometers - but that aviation still maintains a strong competitive edge when it comes to the long-haul transportation market.He believes that high-speed trains and long-haul aircraft will complement each other, while the demand for wide-body passenger aircraft will increase as the market changes against the backdrop of the Chinese civil aviation industry's growing rate of more than 10 percent.