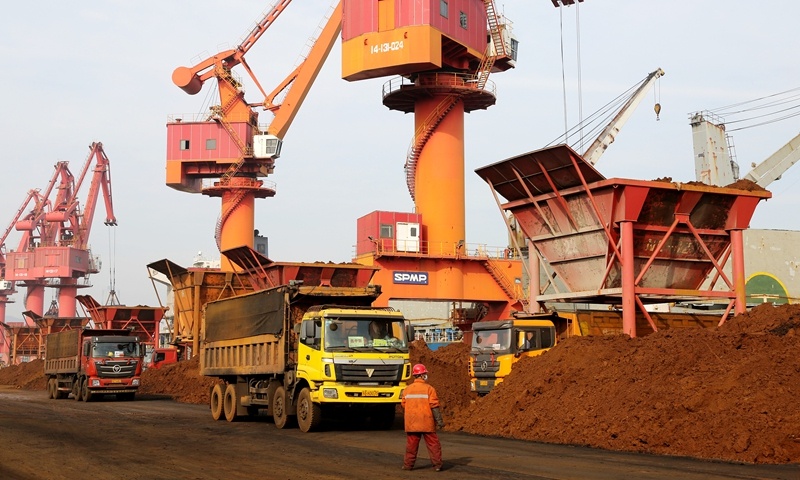 China's imports of raw materials and bulk commodities, including steel, crude oil and soybeans, saw a significant rise in the first quarter of this year, driven by a rapid economic recovery, according to official data on Tuesday.

The jump in China's imports of bulk commodities was largely due to China's fast economic recovery and the resumption of global logistics, analysts said.

Accelerating production, starting in March, prompted rising demand for raw materials, Cong Yi, a professor at the Tianjin University of Finance and Economics, told the Global Times on Tuesday.

Some analysts have also predicted that China's GDP would grow by around 20 percent year-on-year in the first quarter. Official GDP data is due for release on Friday.

However, Li Kuiwen, spokesperson of the General Administration of Customs (GAC), also said that import rises can also be attributed to the fast increase of global commodity prices, which in turn were prompted by extraordinarily loose monetary and fiscal policies adopted by major economies such as the US.

Spot prices are seeing double-digit gains, while key futures prices have jumped significantly this year, in some cases by more than 50 percent compared with the same period last year.

The rising prices of commodities, which are often raw materials used in manufacturing, have also been putting heavy pressure on China's manufacturers.

The price surges for major materials are unlikely to stop until mid-year, Hong Shibin, deputy executive director of the marketing committee of the China Household Electrical Appliances Association, told the Global Times.