World stock markets nosedived for a fourth day running on Tuesday, having seen $4 trillion wiped off from what just eight days ago had been record high values. 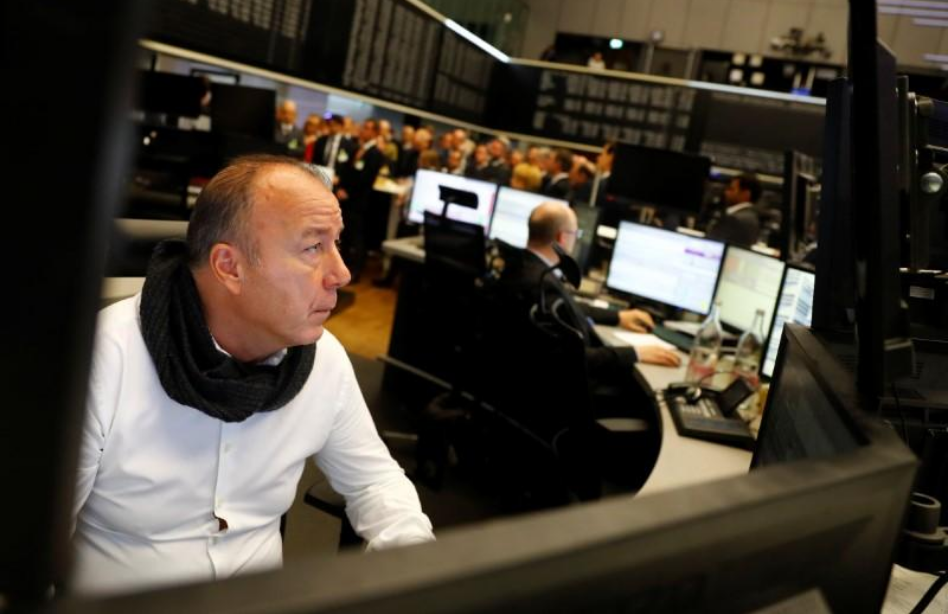 Europe’s main bourses started down as much as 3 percent, leaving investors with little option but to seek the traditional refuges of gold, the Japanese yen [FRX/] and one of the initial triggers for the selloff - benchmark government bonds.

Wall Street futures offer a chink of light as they turned higher but commodities suffered too, with oil and metals all tumbling backwards as what had been one of their best starts to a year also soured rapidly.

The stock selloff had been viewed by some as a healthy correction following their rapid rise over the last year but, as it snowballed through Asia and then Europe, nerves were starting to fray.

Wall Street’s Dow Jones and S&P 500 benchmarks had slumped 4.6 percent and 4.1 percent on Monday, their biggest drops since August 2011. It was also the Dow’s biggest fall on a pure points basis of all-time.

Europe’s early drop sent the region’s STOXX 600 to its lowest level in six months. There was intense trading activity, with more than 40 percent of the average daily volume traded on Germany’s DAX and Europe’s STOXX 50 by 0845 GMT.

The original trigger for the sell-off was a sharp rise in US bond yields late last week after data showed US wages increasing at the fastest pace since 2009. That raised the alarm about higher inflation and, with it, potentially higher interest rates.

That could be painful for markets that have been propped up by central banks’ stimulus for many years.

The 10-year US Treasuries yield rose to as high as 2.885 percent on Monday, its highest in four years and up 47 basis points since the end of 2017.

But a massive fall in share prices prompted an about-turn, and on Tuesday, it fell back to as low as 2.662 percent. German Bunds, Europe’s equivalent benchmark then fell 5 basis points in early trading, their biggest drop in over two months,

US interest rate markets are now pricing in only two Federal Reserve rate hikes this year, a big shift from only a few days ago when they were pointing to three or even four hikes.

That left some popular exchange-traded products that investors use to benefit from calm market conditions facing potential liquidation.

Keen to avoid further risk, investors are closing their positions in other assets, including the currency market, where a popular strategy has been to sell the dollar against the euro and other currencies seen as benefiting from higher interest rates in the future.

Against the yen, which is often used as a safe-haven currency because of Japan’s solid current account surplus, the dollar slipped as much 0.2 percent to 108.86 yen before clawing back to 109.3.

Oil prices also dropped, with international benchmark Brent futures hitting a one-month low before recovering to stand at $67.28 per barrel, down 0.5 percent on the day.