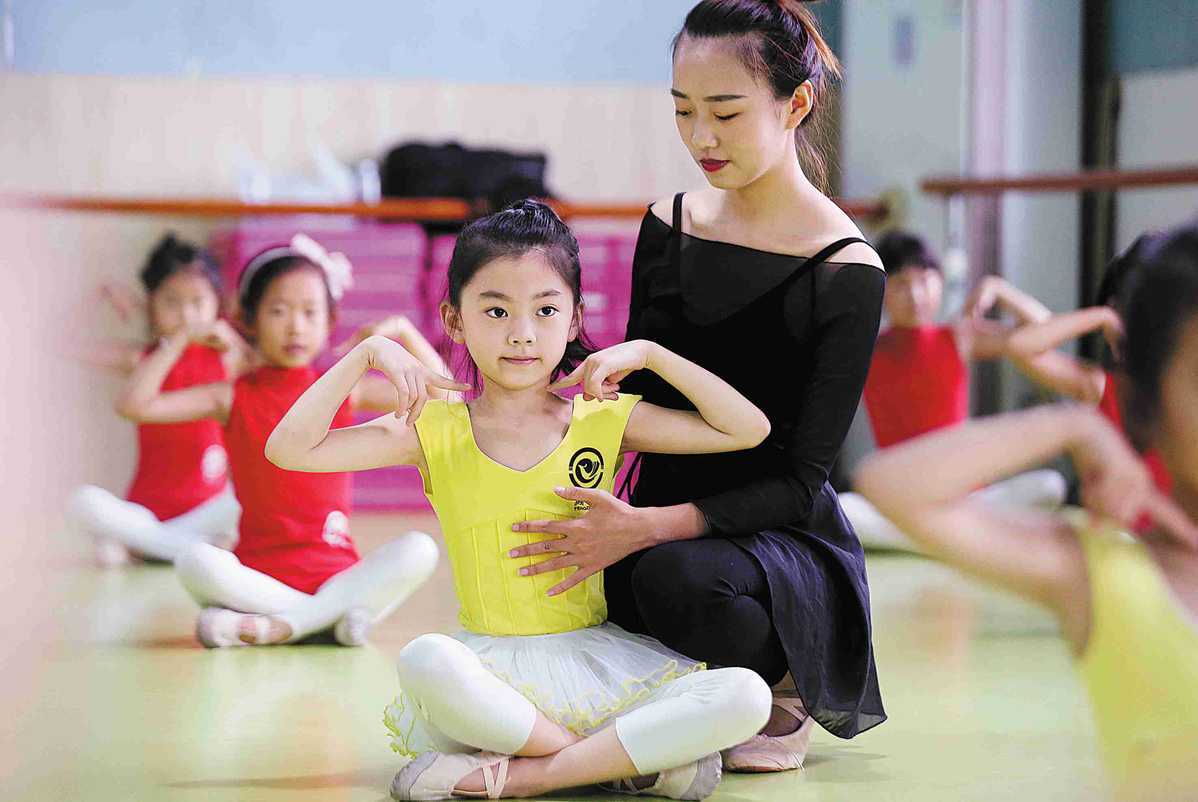 "My son's generation is definitely enduring neijuan, and therefore involves us parents," said Dara Hu, a 41-year-old worker at a foreign enterprise in Beijing. Neijuan, or "internal competition", is a recently created popular buzzword suggesting being stuck in an emotionally and physically draining rat race.

Another thing Hu has been paying close attention to these days, besides her work, is any policy change to the after-school tutoring sector, be it hearsay or news, so that she can make adjustments in a timely manner for her 6th grade son who now studies in a top primary school in Haidian district, Beijing.

"I am not going to let my child stay at home doing nothing, as after-school time is too precious to be wasted. Private family tutoring, art training, physical fitness training and whatever else exists, I will still look and pay for such time for my son," she said.

Larger-than-expected demand from millions of Chinese parents like Hu is perhaps the last ray of hope for the multibillion-dollar after-school education market in China, which has been desperately exploring new ways to survive and thrive again in the aftermath of a guideline to the sector in late July to reform itself.

Therefore, some 4.12 million businesses related to the after-school education sector－including startups, partnerships and listed companies－have put themselves on the path of a quick course correction to sustain their pursuit of billions of yuan in annual profits and double-digit annual growth, as well as align themselves with national goals.

According to the new guideline by the general offices of the Communist Party of China Central Committee and the State Council, China's Cabinet, businesses offering curriculum classes on weekends and holidays are only permitted to provide tutoring on weekdays with a limited number of hours, and they are not allowed to provide such services at any time during summer and winter breaks.

But a more noticeable rule is that all institutions offering tutoring based on school curricula will be registered as nonprofit organizations, which according to industry insiders, will force businesses that naturally pursue profits, toward some non-curriculum education business endeavors.

"The new guideline is just a starting point. We expect that K-9－or kindergarten to 9th grade－after-school tutoring will embrace a long period of supervision in both business development and capitalization," said Jiang Ya and Feng Chongguang, analysts at CITIC Securities.

To understand the current tumult in the country's education sector and its implications for the economy, it is necessary to realize that China－the world's most populous nation－has a culture that highly values college entrance exams as a ticket to a better life. A good college, in the minds of many of China's "tiger moms", could be a path to prosperity for their children.

That's also why the after-school tutoring market has been booming in recent years as it is seen as a way to help children get better grades in a highly competitive society.

Industry insiders believe that it is also a key driver of businesses even after the crackdown, as the country won't allow its education market to focus on grades only－a sign that the nation is trying to promote other evaluation points, including creativity and artistic skills.

Zuoyebang, a leading K-12 online education startup that has a market valuation of around $11 billion, announced recently that its new products will focus on coding, art and oratory skills.

Literally translated as Pumpkin Science, the latest product enables young students to do hands-on science exploration with interactive artificial intelligence content. Ma Bin, head of Pumpkin Science, said that the biggest aim for such products is to empower kids to explore knowledge themselves.

"From some perspectives, if these after-school tutoring platforms can turn toward non-curriculum education, they can give full play to their advantages," said Yuan Bixia, deputy researcher at the National Institute of Education Sciences. 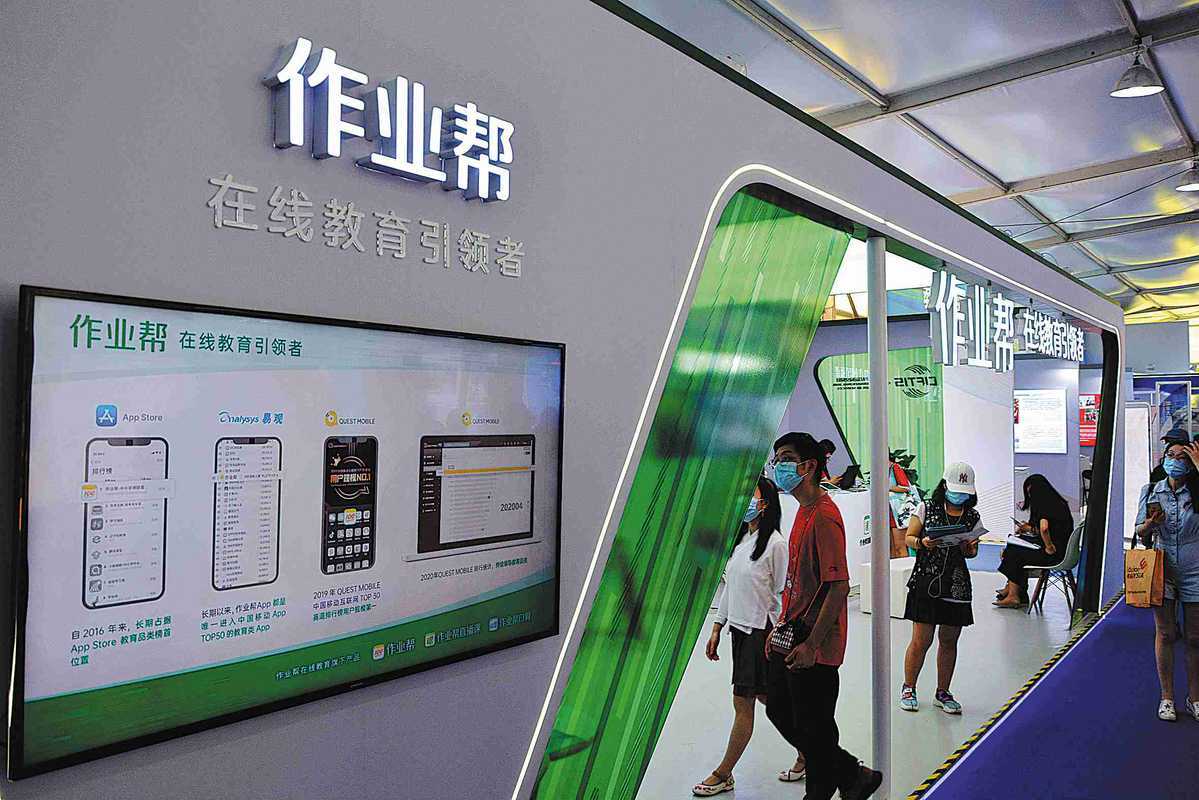 Visitors check out the booth of tutoring company Zuoyebang at a recent expo in Beijing. (Photo: China Daily)

"Such companies can leverage their technological prowess in art, culture, technology, physical education and a slew of colorful after-school activities, which will be a great supplement to the country's compulsory school education," Yuan said.

Listed companies are also eyeing another million-dollar market－vocational or adult education. According to a report by market consultancy iResearch, China's vocational education market is expected to hit 19.19 billion yuan ($3.07 billion) this year, with the online vocational market growing 20 percent annually.

The iResearch report said COVID-19 has put online vocational education in the fast lane of development, which is likely to greatly accelerate overall online education development.

In July, TAL Education Group said it is also mulling vocational skill improvement training. It also launched a new brand of service called Qingzhou, which focuses on tutoring for postgraduate examinations and qualifying exams for students going overseas, including TOEFL and IELTS.

"It is a dark moment for us but it can also be a good moment. We must adjust to survive," said Chen Xiangdong, founder of Gaotu, in an internal letter at the end of July that also announced that some layoffs were inevitable.

Architectural engineering, graphic design, practical English, medical and healthcare and artistic painting are among the top 10 most popular course categories.

"The main goal is to help various groups to improve their business skills and increase employment opportunities, especially with the development of the industrial internet and the acceleration of digital transformation and upgrading of the overall economy," Ma said.

He said emerging technologies are accelerating the integration and innovation of different traditional industries, giving birth to a large number of emerging occupations.

"The country is seeing urgent demand for high-quality compound talent with strong practical ability and innovation ability, such as 5G, artificial intelligence, the industrial internet and other new jobs," Ma added.

The State Council earlier launched a document targeting reform of China's vocational education system, which strongly advocates the integration of industries and education by encouraging universities and enterprises to work together to deploy training plans.

Moreover, the reform also unveiled a pilot program, a "1+X "model utilizing academic and vocational skill level certificates to encourage students to acquire more skills while obtaining a diploma. Specifically, "1" symbolizes a strong foundation of knowledge via traditional degrees, and "X" stands for embracing the future, represented by vocational certificates.

Qu Yifan, head of the education and open economy research department at the University of International Business and Economics, said in an article published by the Economic Daily that current reform in the education sector needs social drivers.

More efforts should be made to actively encourage enterprises to invest funds and provide high-quality information products and services so as to realize diversified investment and coordinated advancement, Qu said.

"Also, more support should also be given to after-school tutoring platforms actively participating in the revitalization of rural areas by helping students and teachers develop information hardware," she added.