China turns to new sources after US actions

Russia's energy sector has emerged as a beneficiary of a series of unilateral actions by the US, with its crude oil exports to the Chinese market skyrocketing and liquefied natural gas (LNG) exports poised to reach new highs. 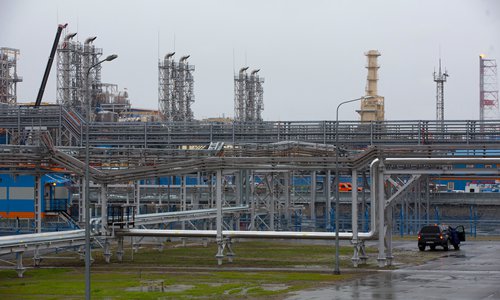 A view of the Yamal LNG plant in the Yamal Peninsula, Russia in August 2018 Photo: VCG

As the US' sanctions on Iran and trade battle with China appear set to persist, analysts expect that China will further increase imports of Russian oil and LNG, while US oil and LNG will be sidelined.

In October, China's crude oil imports from Russia jumped 58 percent from the previous year to a new record of 1.73 million barrels per day, Reuters reported on Monday, citing data from China's General Administration of Customs.

In the same month, China's oil imports from Iran dropped a staggering 64 percent year-on-year to 247,160 barrels per day, according to the Reuters report.

There is a simple reason behind the increase in China's oil imports from Russia and the fall of Iranian oil imports: the US' decision to re-impose an embargo on Iranian oil exports. This pushed Chinese oil companies to seek alternatives, namely Russian oil, in order to avoid US sanctions, according to analysts.

"While the US sanctions on Iran were a unilateral action that was opposed by many countries, including China, Chinese oil companies have no choice but to try to find new imports to replace those from Iran to avoid US sanctions," said Han Xiaoping, chief analyst at energy industry website china5e.com.

The US government announced in August that it would renew a ban on Iranian oil, after it withdrew from a deal reached in 2015 to curb Iran's nuclear program. The sanctions kicked in on November 5.

China has voiced strong opposition to the US sanctions, saying such unilateral action will not resolve the issue. Although China was "exempted" from the US sanctions, domestic companies are still being forced to expand their sources of oil imports.

Apart from the Iran sanctions, the US' decision to launch a trade war with China also prompted hefty tariffs on US crude oil exports to China, which had previously been expected to have dropped to zero in October, according to Reuters.

Amid the changes in the global crude market, Russian companies presented the best alternative choice for China, according to Li Li, director of research at Shanghai-based research and consulting firm ICIS China. "Russian oil has the best prices and best availability," Li told the Global Times on Monday.

Russian LNG exports may also gain from US policies, as China has moved from promising to expand its LNG imports from the US last year to recently imposing tariffs on US LNG.

The latest sign was the completion of a massive new LNG joint venture. China National Petroleum Corp announced on Monday that it has completed construction of the Yamal LNG gas liquefaction plant and production has commenced with an estimated annual capacity of 16.5 million tons.

"This will no doubt bring much more Russian LNG to China, taking the place of US LNG exports," Han said. "It has become sort of a cliché but it is the US' stubborn pursuit of protectionist actions that causes problems for its energy products in the Chinese market."