With the gradual recovery of the global jewelry market, Chinese companies are seeing a boom in exports, with production capacity continuously increasing driven by overseas demand. 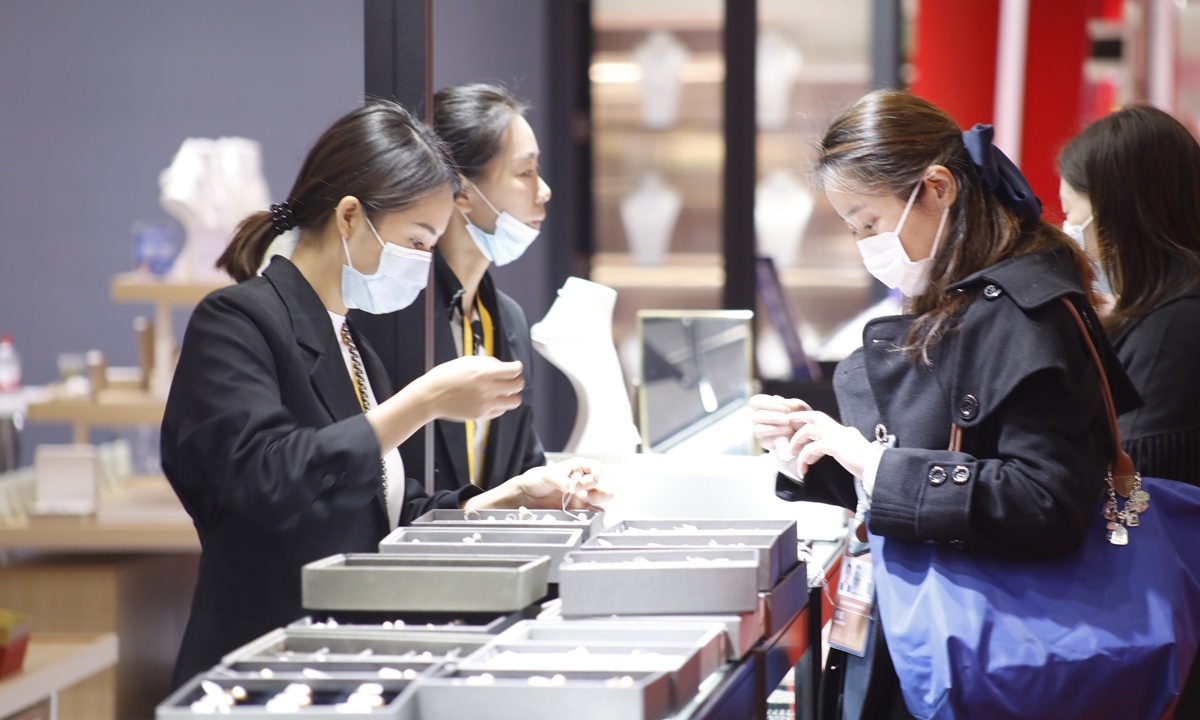 Guangzhou, South China's Guangdong Province, the world's factory for small commodities, is at the center of the world's jewelry processing and manufacturing industry, and is benefitting from the spike in demand.

A jewelry trading company based in Panyu district, Guangzhou has witnessed a jump of up to 50 percent on jewelry exports year-on-year since April through the end of July.

The company's major business is in jewelry design and cutting, with up to 90 percent of orders coming from overseas. The company's manager surnamed Yang told the Global Times that most of their clients are from the US and Europe, with a backlog of order likely stretching out to the end of the year.

"Our production capacity is currently full and we are planning to expand production in the coming weeks with more production machines have been ordered," said Yang.

In the first half of 2021, Guangzhou recorded 7.6 billion yuan ($1.17 billion) of diamond processing imports, an increase of 130 percent year-on-year, with 9.95 billion yuan of jewelry exports, up 95.2 percent from the previous year, according to data released by Guangzhou Municipal Commerce Bureau in July.

Huang Yingshi, general manager of Evergreen Diamond based in Guangzhou said in a recent interview with news portal yicai.com that the global production of diamonds was stagnated in the first half of the year due to the COVID-19 outbreak in India, triggering a global supply shortage.

As the result, some customers and orders ended up with Chinese companies, and Huang Yingshi's company achieved a growth of more than 70 percent in the first half of this year.

Huang Haoxuan, CEO of VDA Jewellery, said that the company has already bounced back to pre-pandemic levels. VDA Jewellery is a supplier and original design manufacturer of jewelry in Hong Kong, with a factory in Panyu district, yicai.com reported. The US is the main market for the company, accounting for about 70 percent of the company's sales.

The positive import and export data was partly because of a low base effect from last year due to the pandemic, according to yicai.com, citing Liang Weizhang, general manager of the Guangzhou Diamond Exchange.

Liang pointed out that the data also illustrates two emerging trends, that jewelry consumption in the global market is still displaying robust demand, and that China's manufacturing industry remains high productivity and has the opportunity to win new international orders by fully taking advantage of unique position of the nation across global supply chains.

However, big overseas clients are still in the midst of recovery, with roughly 50 to 60 percent of their businesses have been recovered, yicai.com reported, citing Huang Haoxuan.

Even under the cloud of the pandemic, international consumers still value diamond jewelry as an expensive gift, said the report, adding that China has a great potential to further develop the diamond industry, and the progress will be determined by epidemic containment, government policies and market demand across the world.

In 2020, despite the rampant epidemic, the total import and export of jewelry in Panyu district still reached 25.2 billion yuan, with the main export markets remaining in the EU, the US, Canada, Southeast Asia and other countries and regions, per media reports.

Panyu district has 2,890 diamond jewelry firms from more than 30 countries and regions around the world, employing nearly 100,000 people.

However, consolidating new customers and new orders over the medium to long term remains a major challenge, some industry insiders said, noting that many companies will still choose processing and manufacturing companies in India because of lower labor costs and other commercial factors.