SEOUL, Aug. 17 (Xinhua) -- South Korea was facing an employment shock as job growth hit the lowest in eight and a half years despite the government efforts to create jobs, a government report showed Friday. 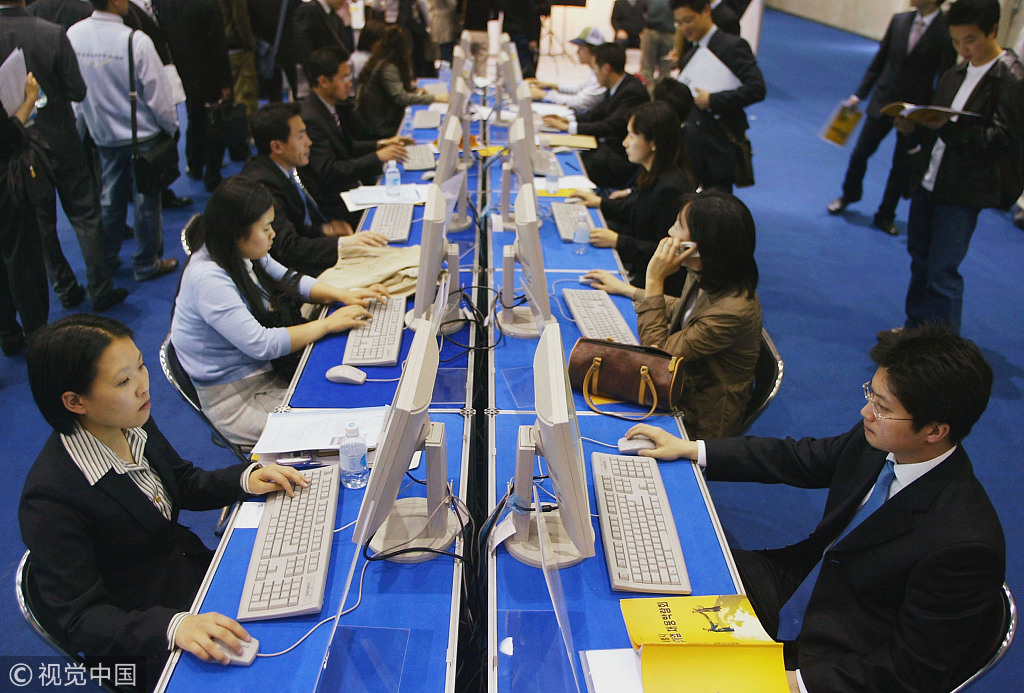 It was the lowest on-year increase since January 2010 when the South Korean economy was under the influence of the 1998 foreign exchange crisis.

The worsening labor market conditions came amid the government efforts to create jobs, especially for youths.

President Moon Jae-in, who took office in May last year, said his top policy priority would be placed on job creation, but it had yet to take effect.

The Moon government unveiled a supplementary budget plan of 3.9 trillion won ($3.7 billion) to create some 50,000 decent jobs for youths this year, and to help laid-off workers in southern regions where shipbuilders and automakers are under the restructuring process.

Kim Dong-yeon, minister of economy and finance who doubles as deputy prime minister for economic affairs, held an emergency meeting with economy-related ministers after the shocking labor data came out.

During the meeting, the participants decided to use all available policy measures to enhance labor market conditions, including the rapid implementation of job-creating projects from the extra budget plan.

The number of workers hired by manufacturers dropped 127,000, or 2.7 percent, in July from a year earlier. Jobs in the business facility management and rental services sector posted the biggest fall since January 2014.

The number in the wholesale and retail industry as well as the lodging and eatery sector declined last month amid the scorching heatwave that discouraged people from going outside for shopping and outing.

The educational services recorded a slump of 78,000 jobs amid the falling number of children of school age. Jobs in the real estate industry shrank 40,000 last month.

Jobs in the healthcare and social welfare services sector grew 149,000, or 7.7 percent, in the cited period. The figure for the finance and insurance industry gained 67,000, or 8.6 percent, in the month.

The hiring rate gauges the percentage of working people to the working-age population, or those aged above 15. The employment rate is used as an alternative to jobless rate, and the government set its long-term target at 70 percent.

The total number of those unemployed increased 81,000 over the year to 1,039,000 in July, surpassing 1 million for the seventh consecutive month.

The unemployment rate among youths aged 15-29 came in at 9.3 percent in July, unchanged from a year earlier.

The expanded jobless rate for youths went up 0.1 percentage point over the year to 22.7 percent in July.

The expanded jobless rate adds those who are discouraged to seek a job, those who work part-time against their will to work full-time and those who prepare to get a job after college graduations to the official jobless rate.