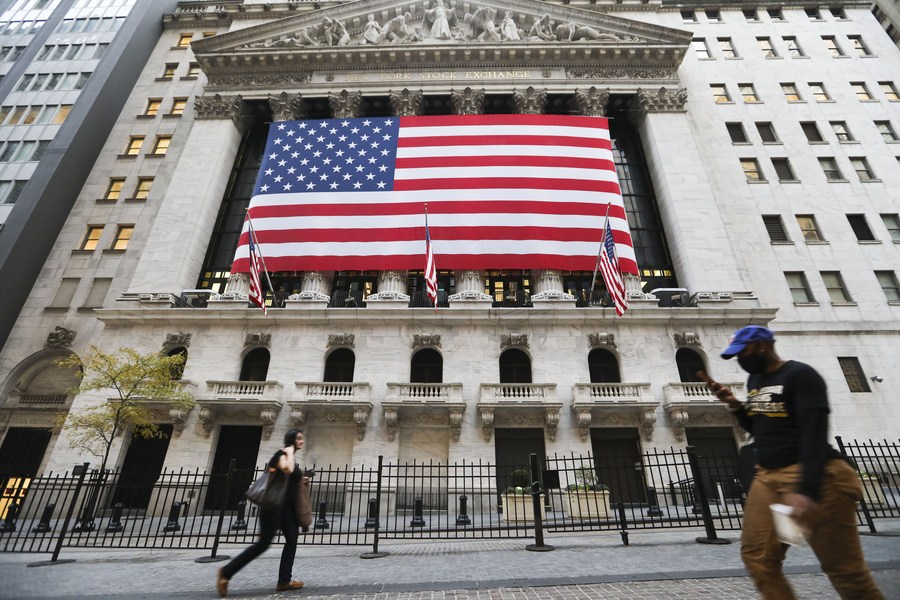 Eight of the 11 primary S&P 500 sectors ended in green, with energy and technology up 2.66 percent and 2.1 percent, respectively, leading the gainers. Consumer staples slipped 0.24 percent, the worst-performing group.

U.S.-listed Chinese companies traded mostly higher with seven of the top 10 stocks by weight in the S&P U.S. Listed China 50 index ending the day on an upbeat note.

Biden on Wednesday unveiled a 2-trillion-U.S.-dollar infrastructure plan, touting it as a "once-in-a-generation" investment in America and proposing a corporate tax hike to offset the cost.

The plan, widely welcomed by Democrats, is expected to face a tough fight in Congress, as Republicans have flatly rejected any increase in taxes. Meanwhile, concerns over mounting debt and inflationary risks are expected to further complicate the plan's prospects.

"The spending will undoubtedly provide an additional boost to the economy, while the tax hikes on corporations will present a drag," Kevin Matras, executive vice president at Zacks Investment Research, said in a note on Thursday.

On the data front, U.S. initial jobless claims, a rough way to measure layoffs, stood at 719,000 in the week ending March 27, an increase of 61,000 from the previous week's revised level, the Department of Labor reported on Thursday. The reading was higher than 675,000 expected by economists surveyed by Dow Jones.

U.S. Manufacturing Purchasing Managers' Index (PMI) rose to 64.7 percent in March, from 60.8 percent in the prior month, said the Institute for Supply Management. A reading above 50 percent indicates the sector is generally expanding, while a reading below signals contraction.

U.S. stocks market will be closed on Friday due to the Good Friday holiday.