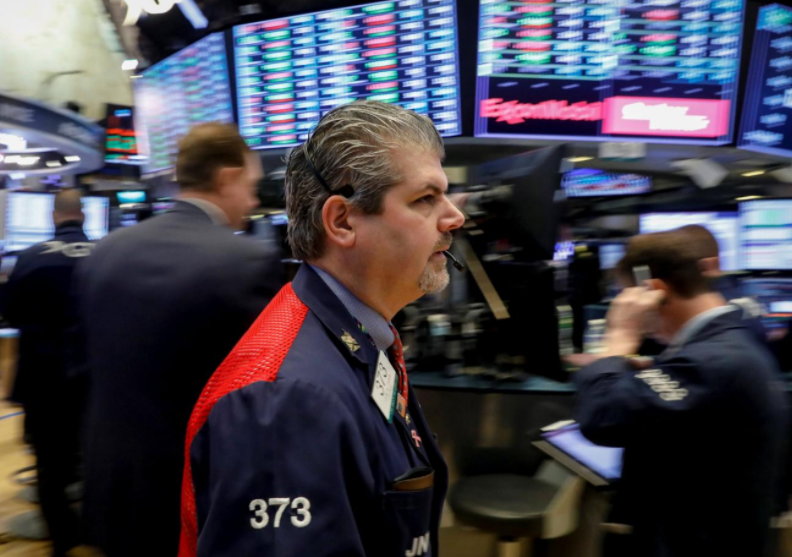 Traders work on the floor of the New York Stock Exchange, (NYSE) in New York, US, January 8, 2018. Photo: REUTERS/Brendan McDermid

The S&P 500 and the Nasdaq edged higher on Friday following positive brokerage recommendations on a bunch of consumer names, but the Dow was reined in by losses in IBM.

“We’ve seen estimates being raised for 2018, so that provides some fundamental underpinnings for the strength we’ve in equity markets,” said Bill Northey, senior vice president of US Bank Wealth Management in Helena, Montana.

However, a “disappointing” full-year profit forecast from IBM (IBM.N) pushed its shares down 4 percent, on track for their biggest single-day loss since July 2017.

American Express (AXP.N) slipped 3 percent after posting its first quarterly loss in 26 years and suspended buybacks for the next six months.

Eight of the 11 major S&P sectors were higher, led by a 0.85 percent gain in the consumer staples index .SPLRCS and a 0.63 percent rise in discretionary stocks .SPLRCD.

The US Senate raced to avert a government shutdown ahead of a midnight deadline with no agreement on funding in sight.

Although the House of Representatives voted on Thursday to extend the funding through Feb. 16, the bill appeared to be on the verge of collapse in the Senate.

“The market appears to be looking through this as a non-essential event, although we’re seeing a little bit of a pickup in volatility in the last couple of days,” Northey said.

Oil prices were down more than 1 percent as a bounce-back in US production outweighed ongoing declines in crude inventories. [O/R]