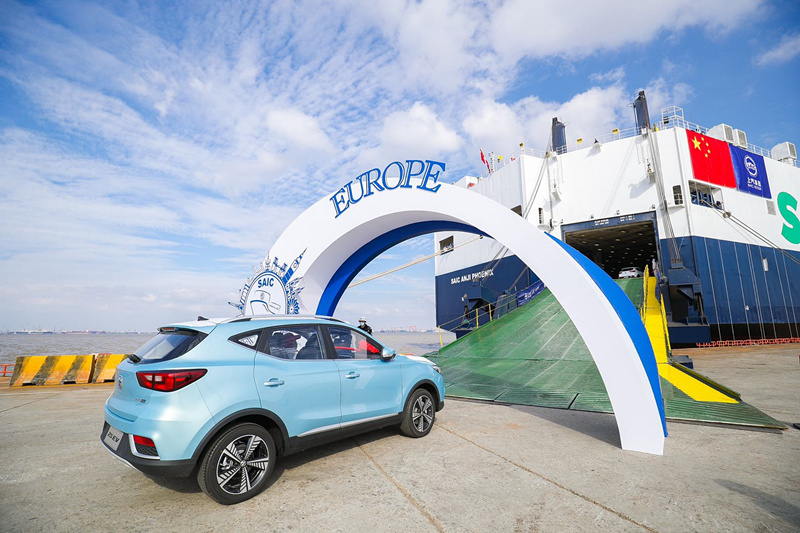 A SAIC model is driven into a cargo ship headed to Europe. (Photo: chinadaily.com.cn)

In spite of the COVID-19 pandemic, SAIC Motor Corporation saw its overseas deliveries in 2020 soar 11.3 percent year-on-year to 390,000 vehicles, accounting for roughly one third of China's total vehicle exports in the year.

SAIC, China's largest carmaker and a partner of General Motors and Volkswagen, has set a goal of selling 1 million vehicles in overseas markets in 2025.

SAIC established its international business unit in 2011. It's now present in over 60 countries and regions, with a sales network of over 810 dealerships. It has nine markets in which annual sales can reach 10,000 vehicles.

The automaker sold over 40,000 vehicles in Europe last year. SAIC said its MG and MAXUS brands are present in more than 10 European countries, including the United Kingdom, the Netherlands, Belgium and France.

New energy vehicles have become a highlight of SAIC's portfolio in overseas markets. Of its 40,000 vehicles sold in Europe, some 60 percent were new energy vehicles. MG's EZS EV was the first small-sized electric SUV to get a five-star rating in the Euro New Car Assessment Programme.

SAIC is one of the first Chinese carmakers to develop new energy vehicles. It has spent billions of yuan and built a research and development team of over 1,000 people. The company has launched over 30 vehicles, including electric, plug-in hybrids and fuel cell vehicles.

The company's new energy vehicles in China totaled 320,000 last year, surging 73.4 percent year-on-year. Statistics from the China Association of Automobile Manufacturers showed that its deliveries accounted for roughly one quarter of the total new energy vehicle sales in 2020.

SAIC said it is planning to launch almost 100 such vehicles from 2021 to 2025, with half of them bearing SAIC's own marques.

The carmaker is partnering with China's Alibaba to create a joint venture, called Zhiji, dedicated to smart electric vehicles. Its first model is expected to roll off the assembly line in late 2021.

The carmaker, with an investment of over 10 billion yuan ($1.53 billion), said it will unveil two models in January. A third model will debut at the Shanghai auto show in April.

The marque's first showroom will open around May 2021 in Shanghai, and mass production of its first model will start in the same year.

Zhiji said SAIC's expertise in car production and Alibaba's advantage in big data and artificial intelligence will make its models more competitive in the market.

China has been the world's largest market for new energy vehicles since 2015. Sales of electric cars and plug-in hybrids are estimated to reach 1.8 million in 2021, according to the China Association of Automobile Manufacturers.

SAIC delivered 5.6 million vehicles in 2020 and maintained the position of China's largest carmaker by sales, a title it has kept for 15 years in a row.

SAIC aspires to become a top 5 carmaker in the world by 2025. It currently ranks seventh behind giants including Volkswagen AG, Toyota Motor and the Renault-Nissan-Mitsubishi alliance.