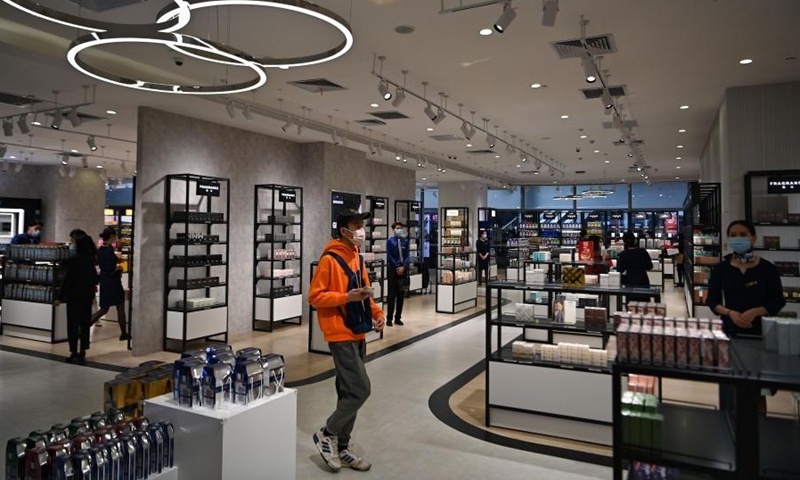 The week-long Spring Festival holidays have triggered another shopping spree for the duty-free shops, as latest data from Hainan island, the "Hawaii" of southern China revealed the island's windfall profits over the past week.

According to the Hainan commerce department, from February 11 to 17, the 7-day sales of outbound duty-free shops in Hainan exceeded 1.5 billion yuan ($231 million). Sales exceeded 280 million yuan on February 14.

The data followed the previous month's expanding performance as Hainan has reaffirmed as the leading duty-free region in China, with the total sales of duty-free shops in the province's in January coming in at 4.05 billion yuan, a year-on-year increase of 168 percent.

Data from travel platform qunar.com on Thursday showed that the hotels with stars have the highest booking in China, with the average price of 1,501 yuan, and information provider VariFlight said Sanya Phoenix International Airport has an average 157 daily inbound flights during the week-long holidays.

The upward trend in performance is also in line with official data, which showed China's consumer market demonstrated "robustness" and "vitality" under temporary pandemic control measures and the request for people not to travel during the holidays.

The figure exceeded the Spring Festival holidays spending in 2019 by 4.9 percent, prior to the COVID-19 pandemic.

The rising sales of Hainan duty-free products are seen as vindication of China's opening-up policy, as the resort island offers greater visa-free access and duty-free shopping for tourists backed by an air transport network.

As the COVID-19 pandemic damped the tourism and retail sectors, Hainan has focused on reigniting big-spending bargain hunters with the island positioned as an international tourism and consumption destination.

The duty-free shopping boom has been accelerated by a big jump in shopping quotas for non-locals and disruption to overseas travel.

In July 2020, the duty-free shopping quota in Hainan was raised to 100,000 yuan per person per year from the previous 30,000 yuan, while the purchase limitations were significantly cut and more duty-free products were offered.

Sales of offshore duty-free shops in the province have exceeded 31.58 billion yuan in 2020, according to data released by local department.

In 2020, total company revenue is projected to have been 52.618 billion yuan. In the fourth quarter, the company's net profit reached 3 billion, almost the total sum from the previous three quarters. It also registered a 6 fold increase in year-on-year growth.

Duty free shops contribute little to airports' profits. In 2019, Sunrise branded duty-free shops contributed around one third of the total duty-free revenue in China, but only one tenth of profits, due to the fees charged by the airports, according to data published by 21st Century Business Herald.

In 2019, Sunrise duty free shops in Shanghai paid more than 5 billion yuan to Shanghai's airport, around half of the total revenue of the airport's revenue. In 2020, the airport duty free shops also take a hit from the reduce in passenger numbers, which dropped drastically to 240 million.

Yonhap News Agency also reported in 2020, the sales of duty free shops plunged 37.7 percent in South Korea,largely blamed on by the pandemic.

As fewer South Korean residents leave the country, the percentage of foreigners patronizing in the duty-free shops climbed to 94 percent in 2020 from 83 percent in 2019. Total number of shoppers was recorded at 106.69 million, only around 22 percent of the number in 2019. In December, the sales figures dropped 16.6 percent from the previous month, the report said.

TAV Airports Holdings has reported a 67 percent fall in revenues from duty free concessions to 14.9 million euros ($17.9 million) year-on-year in 2020. The duty-free business is managed by ATÜ Duty Free, the TAV 50 percent joint venture with Unifree Duty Free and Gebr Heinemann, according to trbusiness.com.