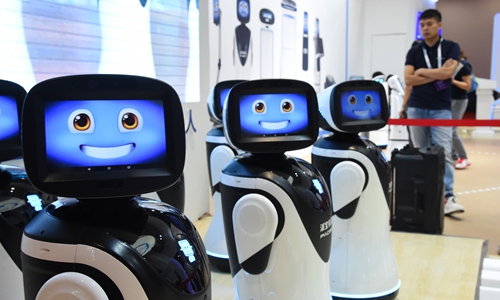 The first half of 2019 witnessed the first year-on-year slide in sales of industrial robots, according to an industry report released on Monday. Experts said a decline in demand is behind the drop but sales will rise alongside growth in related industries.

Sales of domestic-brand robots were down 13.6 percent year-on-year to 19,281, according to a report released by the China Robot Industry Alliance. Qu Daokui, president of the alliance and founder of major Chinese robot manufacturer Siasun Robot and Automation Co, attributed this decline to the overall underperformance of the automobile business, according to a report by chinanews.com on Monday.

The automobile market in China has experienced a downturn this year. In the first ten months of 2019, the total sales of automobiles dropped 9.7 percent year-on-year to 20.6 million, according to statistics from the China Association of Automobile Manufacturers. The association predicts an overall 10 percent drop in 2019.

"The industry analysis is still very optimistic, " Qu was reported to have said. "It is still a time of explosive development for industrial robots, especially with the rise of artificial intelligence and big data. The future of Chinese robots is still bright."

The industry's optimism comes mainly from the expectation of robot-related industries, particularly with rising 5G technologies, Xiang Ligang, an expert on the telecommunications industry, told the Global Times.

"It is expected that the 5G network - especially the Internet of Things (IoT)  will give a strong boost to the automation and robotics industry,??Xiang said. "And there will be an upgrade in the development and deployment of robots as the technology matures.

In contrast to the 13.6 percent drop in sales of domestic-brand industrial robots, the total market value of industrial robots was just 1.4 percent down to around 2.8 billion yuan ($397.7 million), which indicates a rise in the value of each robot, Qu noted.