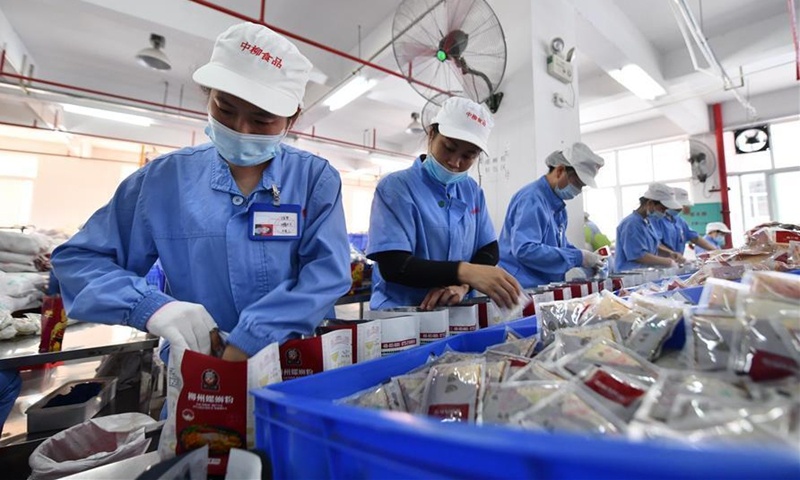 During an inspection tour to the region, the Chinese president also offered words of encouragement to private enterprises, which are playing an increasingly crucial role in the country's social and economic development.

According to data provided by e-commerce platform Suning.com, over the past week, sales of Haohuanluo luosifen on its platform have surged by 1,913.33 percent compared with the previous week, while another brand - Luobawang luosifen - saw growth of more than 50 percent.

"There was an online store owner who contacted me and vowed to buy 5,000 bags of luosifen immediately on Monday," Wei Wei, who is in charge at the Guangxi Liuzhou Luoshifu Food Trade Co, told the Global Times on Tuesday.

"More than that, about 10 online store owners and livestreaming celebrities expressed their willingness to cooperate with me," Wei said.

The surge in sales followed Xi's visit to a food-processing zone for luosifen rice noodles during his inspection of the city of Liuzhou in Guangxi on Monday.

The Chinese president said that it is not an easy task to develop the small rice noodle business into such a large industry, according to the Xinhua News Agency on Tuesday.

From the birth of the first packaged luosifen company at the end of 2014, it only took six years for the industry's output to exceed 10 billion yuan ($1.5 billion) in 2020, Xinhua reported.

In 2020, sales of luosifen on Alibaba's e-commerce platform Tmall jumped by 800 percent year-on-year. In the first quarter of 2021, sales maintained a high growth rate of more than 30 percent, according to data Tmall sent to the Global Times on Tuesday.

Bagged servings of luosifen are now exported to more than 20 countries and regions, and this business has created about 250,000 jobs in all links of the entire industry chain, Xinhua reported.

Wei said that he believes the industry could grow to about 50 billion yuan in value after President Xi "gave his thumbs-up."

During the inspection, the Chinese president also expressed his hope that private enterprises could "develop boldly and with confidence."

"We encourage the development of private businesses. When they encounter difficulties, the Party and the state give them support, and when confusion arises, guidance is offered, with the hope that they can develop boldly and with confidence," Xi said.

Such words of encouragement are surely an assurance to the vast number of Chinese private firms who are playing a key role in the Chinese economy, amid challenges and uncertainties, Li Jin, chief researcher with the China Enterprise Research Institute, told the Global Times on Tuesday.

The private sector is playing an increasingly important role in China's job creation and innovation drive, providing over 80 percent of total jobs in the country and contributing more than 70 percent of the country's technological innovation and new products.

Joint efforts between the government and large private companies have also played a crucial role during the country's anti-pandemic fight.

The president's encouragement comes at a critical time and will inject impetus into the country's vast private enterprises that face mounting challenges such as high costs, difficulties in financing and stiff competition, all of which have become more evident, Li said.

More support measures for private firms are also expected to come out soon, according to Li.