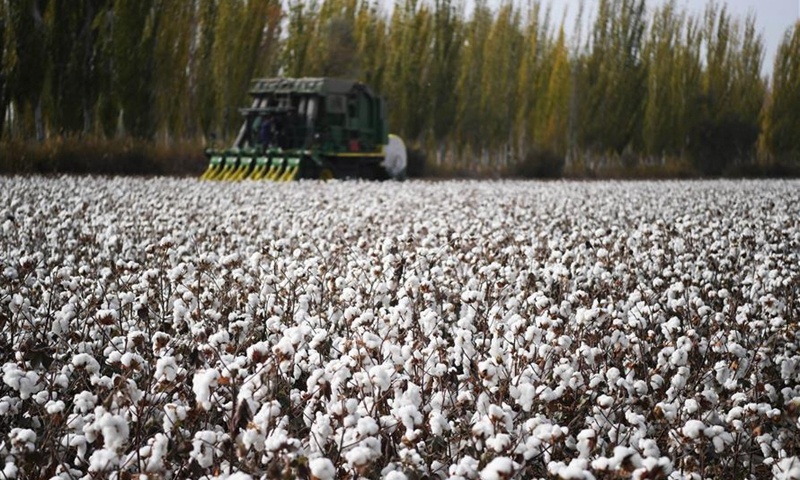 Photo taken on Oct. 25, 2019 shows a cotton harvesting machine working in a field in Awat County, northwest China's Xinjiang Uygur Autonomous Region. With a long history of cotton planting, Awat is known as the "Town of Cotton" in China. The county boasts high-quality cotton and high-efficiency in production. (Photo: Xinhua)

Textile products made with cotton from Northwest China's Xinjiang Uygur Autonomous Region have seen their sales skyrocket in the domestic market over the past several days, as consumers expressed firm support for the product with their purchasing power after bans by some foreign brands sparked widespread outrage in the country.

"Sales of home textiles are surprisingly high on all of the e-commerce platforms, with short-video platform Toutiao and Douyin leading the increase with a growth rate of 1,300 percent year-on-year. Sales on Taobao and JD.com rose more than 150 percent on a yearly basis," a Xinjiang-based textile factory owner surnamed Zhou told the Global Times on Sunday.

Irritated by boycotts by foreign clothing brands like H&M, Nike and Adidas, which said they would not use Xinjiang cotton due to "forced labor" - a claim pushed by some Western politicians that has been widely debunked, Chinese netizens expressed their support for Xinjiang cotton by purchasing related products.

Livestreaming anchor Viya sold Xinjiang cotton textile products worth 23.53 million yuan ($3.59 million) within an hour during a live broadcast on Friday that was watched by about 12 million people, according to media reports.

Some netizens said that products were sold out in seconds before they could buy anything, while others were lucky enough to grab a bath towel made with Xinjiang cotton to show their support.

Some enterprises in Xinjiang operated at full swing to meet the increasing demand. Zhou's factory can make 5,000 cotton quilts per day, but that is hardly enough to fill all of the orders. According to Zhou, a new production line will be assembled next week to increase output.

"All summer comforters are out of stock, and my factory is operating fully to meet orders. Inquiries are huge on different e-commerce platforms, a sign that more orders are possible," Zhang Biao, owner of a textile factory in Yuli county of Xinjiang, told the Global Times on Sunday.

Zhang added that the boycott of Xinjiang cotton by some foreign brands actually began in the second half of last year and the local industry has made adjustments to cope with the impact.

Zhou also said that to his knowledge, nearly 99 percent of home textile factories in Xinjiang have domestic business and won't be influenced heavily by foreign brands' boycotts of Xinjiang cotton.

Born and raised in Changji Hui Autonomous Prefecture in Xinjiang, Zhou built his factory in 2016. He employs 31 minority workers, accounting for 61 percent of the total workforce. Those minority workers mainly come from southern parts of Xinjiang where the farmland is limited.

"They can earn on average 5,000 yuan [$764.5] per month by working in the factory, and they can use this to support their families. There is absolutely no forced labor," said Zhou, adding that the so-called "forced labor" is absurd.

Machines and drones are used in cotton planting and harvesting in Xinjiang, so the industry is no longer labor-intensive.

In northern Xinjiang, the proportion of mechanization in cotton planting and harvesting reached 95 precent in 2020, according to Nongji Zhinan, an industry analysis agency.

As the largest source of cotton in China, Xinjiang produced 5.161 million tons, or 87.3 percent of the country's total cotton output in 2020, per statistics of the National Bureau of Statistics

In recent years, China's annual cotton consumption has been about 8 million tons. To meet domestic demand, China imports about 2 million tons of cotton every year, according to statistics that the China Cotton Industry Association (CCIA) sent to the Global Times on Sunday.

As a result, China's exports of raw cotton are small. Cotton planting enterprises in Xinjiang mainly distribute goods according to orders. If there are no foreign orders, firms have no need to export their products, the CCIA noted, adding that Xinjiang cotton growers' earnings should not be affected this year, thanks to agricultural policy support.

But Zhang warned that foreign clothing brands' boycotts of Xinjiang cotton could be on commercial cotton producing and clothing.

China is a big exporter of cotton textiles. In 2020, China's export of textile yarn, fabric and products reached $153.84 billion, with a year-on-year growth of 29.2 percent, according to customs data.