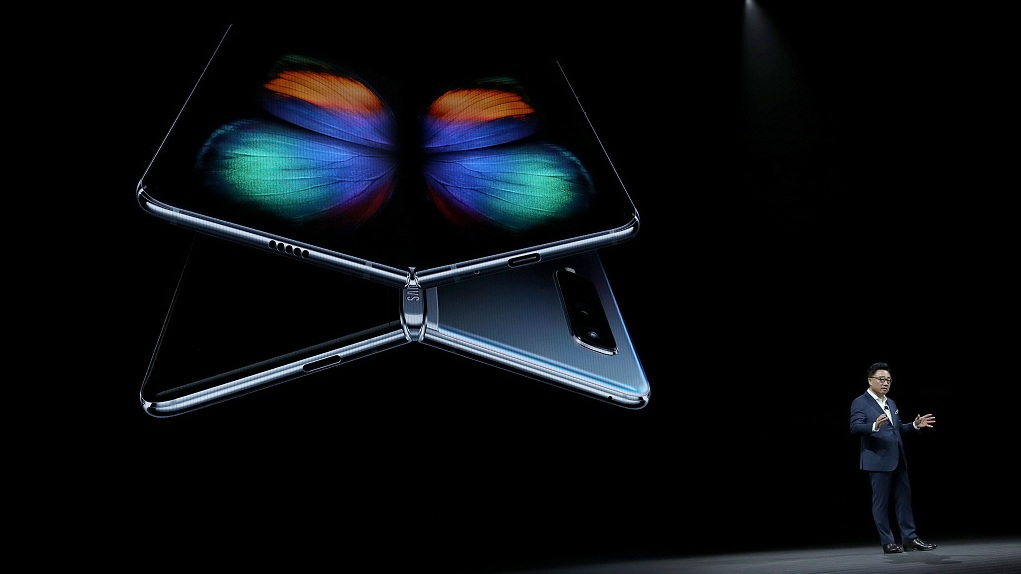 Samsung Electronics Co., Ltd. on Wednesday unveiled a nearly 2,000-US-dollar folding smartphone in a bid to break the innovation funk that has beset the smartphone market and reignite consumer interest in a massive consumer electronics category that had its worst sales ever last year.

The Galaxy Fold will go on sale for 1,980 US dollars on April 26 and take advantage of new and faster 5G mobile networks. The device looks similar to a conventional smartphone, but then opens like a book to reveal a display the size of a small tablet at 7.3 inches (18.5 cm).

When fully unfolded, the device will be able to simultaneously run three different apps on the screen. The Galaxy Fold will also boast six cameras: three in the back, two on the inside and one on the front.

The device "answers skeptics who said that everything that could be done has been done," DJ Koh, chief executive of Samsung Electronics, said at an event in San Francisco. "We are here to prove them wrong."

With the foldable phone, Samsung is trying to take the technology lead on two fronts in the smartphone race: offering an eye-catching new feature with the big, bending screen and the first 5G connection in a premium phone, a feature analysts do not expect Apple to match until 2020.

It also challenges the notion of what a phone can cost, debuting at nearly twice the price of current top-of-the-line models from Apple and Samsung itself.

Patrick Moorhead, founder of Moor Insights & Strategy, said the new folding device could help Samsung stay at the top and lure consumers to upgrade devices that have looked largely the same over the past five years.

"Samsung and Apple go back and forth" to lead the premium smartphone market, Moorhead said. "I think this is Samsung's chance to take back the innovation crown."

Samsung said it had developed new manufacturing processes for the phone's hinge and flexible display to tolerate opening and closing hundreds of thousands of times.

Samsung is not the first company to launch a folding phone. World's first foldable smartphone, manufactured by the Shenzhen-based Chinese startup Royole, made its debut in China last November.

China is also in a leading position in flexible screens, the key component for a folding phone. Last year, Chinese display manufacturer BOE has announced to start mass production of flexible screens and will rival Samsung in this market.

Along with the folding phone, Samsung also added new cameras and a 5G version to its Galaxy series of phones.

Verizon Communications Inc. will be the first carrier to offer service for Samsung's 5G phones. The networks are expected to be 10 times faster than current ones, improving viewing of live news and sports events.

The 5G smartphones, both folding and rigid, aim to beat major rivals Apple and Xiaomi Corp. to market with a next-generation device as Samsung defends a narrowing lead in global handset shipments, while Apple is not expected to release a 5G smartphone until late 2020.

Rival smartphone makers are expected to announce 5G models at next week's Mobile World Congress (MWC), the industry's top annual event, in Spain. Samsung said its 5G handset would be available in the early summer.

Other new products and phone models released by Samsung

Samsung also introduced several accessories to compete against Apple, including a pair of wireless headphones called Galaxy Buds. The headphones include wireless charging, a feature that Apple has promised to put into its competing AirPods but has not yet released.

Samsung also said that its new Galaxy phones will be able to wirelessly charge its headphones and new smartwatches by setting the accessories on the back of the phone.

Samsung also released new Galaxy S10 phones that echo the features in other recent models. Each device in the S10 lineup boasts fancy cameras, sleek screens covering the entire front of the devices and at least 128 gigabytes of storage – all essential features to consumers shopping for phones.

The new phones are able to take wider-angle shots than previous models and can charge other devices, including wireless headphones and smartwatches. A fourth S10 model, due out this spring, will have faster wireless speeds through the emerging 5G cellular network.

Two of Samsung's new models, the S10 and the S10 Plus, are largely incremental upgrades of last year's S9 and S9 Plus, although they are designed differently. They are about the same size as last year's models but will have more display space, as Samsung found additional ways to eliminate waste around the edges. As a byproduct, the top right of the display has a circle or oval cut out for the front-facing cameras.

The lowest-priced "essentials" model, the S10e, has most of the same features but is five percent smaller than the S10 in volume. The S10e also lacks curved edges, a signature feature for many Samsung phones.