Samsung on Wednesday unveiled a smartphone that folds open to be a tablet, becoming the first major manufacturer to offer the feature as it strives to stoke excitement in a slumping market. 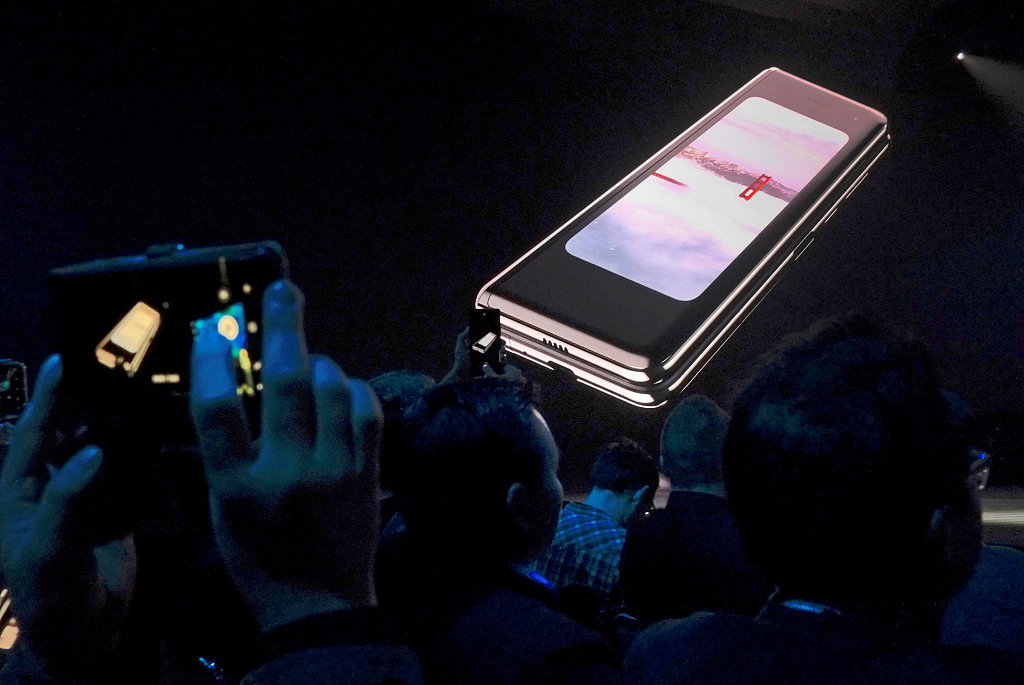 The South Korean giant also appeared to get the jump on rivals by announcing the first smartphone for fifth-generation -- or 5G -- wireless networks, while stepping up its efforts in artificial intelligence and wearables.

The Galaxy Fold, unveiled at a San Francisco event, serves as a smartphone with a 4.6-inch display and opens like a book to become a 7.3-inch tablet.

"We are giving you a device that doesn't just define a new category, it defies category," said Samsung's Justin Denison at the event.

The launch comes as the smartphone market experiences its worst-ever decline with consumers keeping devices longer and waiting for new innovations.

Samsung made the announcement on the home turf of rival Apple, with the two giants battling in the premium segment of the market.

Denison touted the Fold as "a one of a kind luxury device" and boasted that it lets three apps operate simultaneously on its large screen.

"You can watch a YouTube video of Hawaii; text your friend about it, and browse travel options all at the same time," Denison said while showing off the device.

"We are pushing beyond the limits of today's technology to inspire a new generation of smartphones and recharge growth for our industry," said DJ Koh, head of mobile communications at Samsung Electronics.

"For those who say everything possible has already been done, I say open your mind and get ready for the dawn of a new mobile era. Buckle your seatbelt, the future is about to begin."

He said the Galaxy Fold was designed "for those that want to experience what a premium foldable device can do, beyond the limitations of a traditional smartphone."

Analyst Bob O'Donnell of Technalysis Research said on Twitter: "As expected, it's not cheap, but the #GalaxyFold will still be THE device for gadget lovers."

They will feature AI-enhanced software and wireless charging capabilities that allow Galaxy smartphones to be used as charging pads to power up other devices.

No price or release date was announced for the S10 5G version. Other options include the S10e starting at $749, and the largest version, the S10 Plus, at $999 -- which will be available March 8.

"They are trying to ensure that they have something exciting for early adopters, and at the same time have a refreshed line-up of phones people actually buy."

Earlier this year at the Consumer Electronics Show, Chinese startup Royole showed off what it claimed was the first foldable smartphone, which can fit into a pocket but unfold into a full-sized tablet computer. It is available in China and the US for some $1,300.

Greengart and other analysts did not expect foldable or 5G smartphones to be mass-market successes this year, reasoning that apps, software, and networks were not yet in place to support wide adoption.

Samsung also announced that its digital assistant Bixby will be available in new languages -- British English, German, Italian and Spanish --  in addition to the already available US English, Korean and Mandarin Chinese.

The move helps Samsung step up efforts in the rapidly growing field of voice-based artificial intelligence dominated by Amazon's Alexa and Google Assistant.

"We are strongly committed to our AI business, and continuously expanding Bixby's intelligence capabilities to provide more users with the best possible AI experience," said Eui-Suk Chung, Samsung's head of software and AI.

The smartwatch will support apps designed to monitor blood pressure and stress indicators and is designed to detect a variety of workouts including running, biking and rowing.

"Consumers are increasingly putting their overall well-being at the center of their lifestyle decisions, and they’re looking for wearables that make it easier to get active and stay balanced every day," said Koh.

Samsung is opening three US retail stores to promote its Galaxy line of smartphones, stepping up competition with Apple.