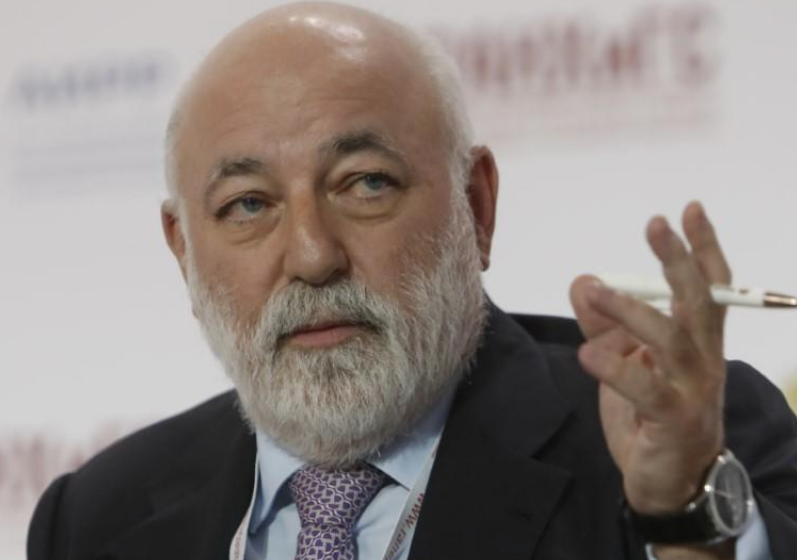 Chairman of the Board of Directors of Renova Group Viktor Vekselberg speaks during a session of the Gaidar Forum 2018 "Russia and the World: values and virtues" in Moscow, Russia January 17, 2018 (Photo: Reuters)

ZURICH/MOSCOW (Reuters) - Sanctions-hit Russian oligarch Viktor Vekselberg and his Renova Group have repaid loans amounting to over one billion Swiss francs ($1 billion) to banks including JPMorgan (JPM.N), Credit Suisse (CSGN.S) and UBS (UBSG.S), Renova and a source familiar with the matter told Reuters on Saturday.

Vekselberg was placed under sanctions in a crackdown by the United States on President Vladimir Putin’s inner circle as retaliation for alleged Russian interference in the 2016 U.S. election. The banks had until June 5 to resolve the issue, when U.S. sanctions come into effect.

“The credit issue with the banks is finally resolved,” the source close to the matter said, adding certain finer details remained under discussion. “The banks have received the money.”

There had been worries over the possibility the loans, which were taken out using large stakes in Swiss industrial groups Schmolz + Bickenbach STLNS>, OC Oerlikon (OERL.S) and Sulzer (SUN.S) as collateral, could lead to a broad selloff of the shares if a solution wasn’t found by June 5.

Were the loans not repaid, the banks could declare an enforcement event allowing them to sell the shares held as collateral. In the case of a mandatory prepayment event the banks would be allowed to conduct a managed sale.

Another Swiss-based investment vehicle for Renova, Tiwel Holding, took out a separate 350 million franc credit from the same banks minus UBS in July 2016, according to a separate Takeover Board filing. Sources, however, placed the size of the repaid credit at 310 million francs.

While such deals are generally confidential, the Swiss Takeover Board had published details of the financing agreements in documents relieving creditors from obligations to make mandatory tender offers for the respective firms.

It is unclear how these conditions were affected by Vekselberg’s stake reduction in the firm.

The firms, in which Vekselberg holds a stake, have experienced a variety of fallouts since Washington announced impending Russian sanctions, including a brief trading halt and business disruption at previously Renova majority-owned Sulzer, board changes at Schmolz + Bickenbach and inquiries from financiers. Vekselberg has cut his holdings in the firms.

In early May, Renova received a credit line from Russia’s Promsvyazbank to support the business after it was hit by U.S. sanctions, Russia’s finance ministry said.

The Renova spokesman said the group repaid loans from its “own sources”.