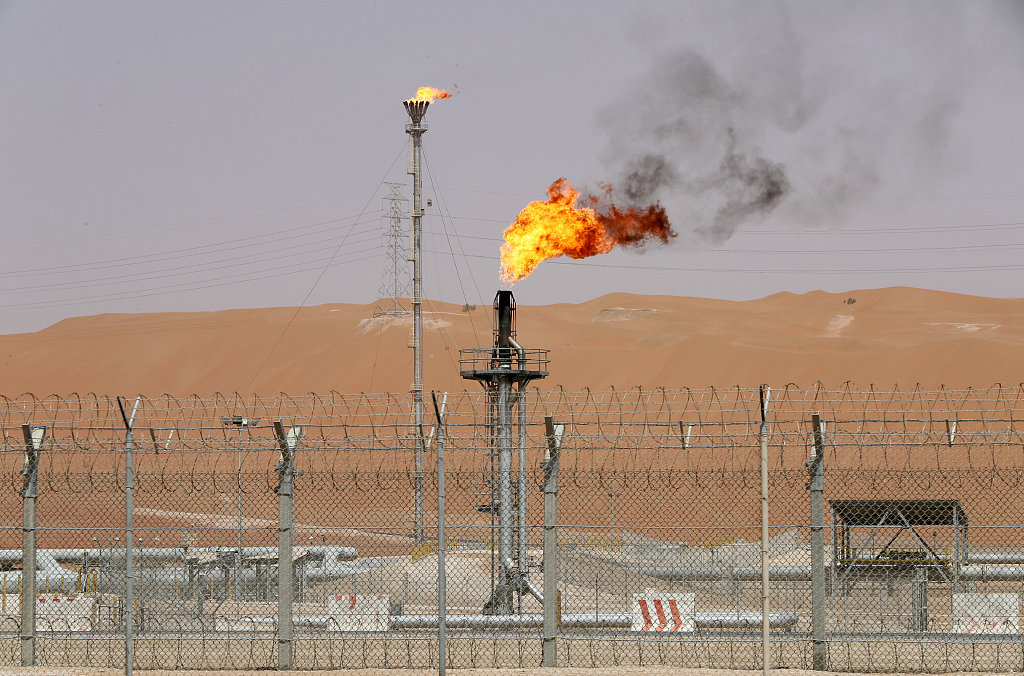 Flames are seen at the production facility of Saudi Aramco's Shaybah oilfield in the Empty Quarter, Saudi Arabia May 22, 2018. (File photo: VCG)

Saudi Arabia, the world's top crude exporter, said Sunday it will cut oil output from next month, as major producers held a key meeting to discuss shoring up sliding prices.

Saudi Energy Minister Khalid al-Falih announced the kingdom was cutting its supplies by 500,000 barrels per day from December.

But Falih said ahead of the meeting of OPEC and non-OPEC key producers that there was not yet consensus on a broader output cut.

Oil prices have shed a fifth of their value in just one month after surging to a four-year high in early October, driven by a combination of factors centred on higher supply and fears of sluggish demand.

The meeting of the Joint Ministerial Monitoring Committee in Abu Dhabi will not take decisions, ministers said, but will propose recommendations for a crucial ministerial meeting in Vienna early in December.

Falih told reporters ahead of the meeting that Saudi Arabia's "crude exports for December will be 500,000 bpd lower than November".

The world's top oil exporter has been pumping 10.7 million bpd since October, he said.

The Saudi minister acknowledged that so far there was no fresh agreement on reducing production among OPEC and non-OPEC producers, who struck a deal in late 2016 to cut output by 1.8 million bpd to remedy an oversupply crisis.

"There is no consensus yet among oil producers about cutting production," Falih said at the gathering.

He insisted it was "premature to talk about a specific action", when asked about the possibility of an output cut.

"We have to study all the factors," Falih said.

In his speech at the start of the meeting Falih said the recent sharp drop in prices has "surprised us".

He said the market sentiment has shifted from one of fearing shortages to one worried about oversupply.

He also attributed the sharp drop in prices to "microeconomic uncertainties", and signs of a build-up in crude inventories.

The UAE's Mazrouei said that the goal of the OPEC and non-OPEC cooperation was to strike a balance in the market, adding that recommendations for possible action will be made to next month's ministerial conference.

The latest price slump comes as the United States has upped production of shale oil, while Saudi Arabia, Russia and others have raised supplies of crude amid signs of slowing demand.

There have also been signs of a softer-than-expected impact from US sanctions on Iranian oil exports.

"With the Iranian sanctions not being as severe as initially feared, officials from the OPEC and non-OPEC producers may discuss at the weekend the need to bring compliance back down... or risk another 2014-style slide in prices."

Producers implemented large cuts starting at the beginning of 2017 and managed to push up oil prices from below $30 a barrel to over $85 in October, strongly improving their revenues.

But the producer nations eased the output cuts in June after signs of a tighter market and higher prices, allowing hundreds of thousands of extra barrels to hit the market.