BEIJING, Feb. 26 (Xinhua) -- Like birds pecking at grain, a dozen robotic arms pressed components onto a POS machine, checked its functions and packed it into a box under the supervision of a human worker. Next to the robots, it took over 60 workers to assemble the same device, used to process card and mobile payments.

Instead of shrinking production, Kingtronics chose to deploy more robots, a strategy that not only raised the company's profits but also allowed the Hong Kong-invested firm to expand its business by designing and selling automatic equipment to manufacturers that cannot afford imported robots.

"We anticipate a market that has no boundaries, as many medium- and small-sized enterprises welcome automated solutions," said Henry C. Tseng, chairman of the company in the city of Zhangzhou. 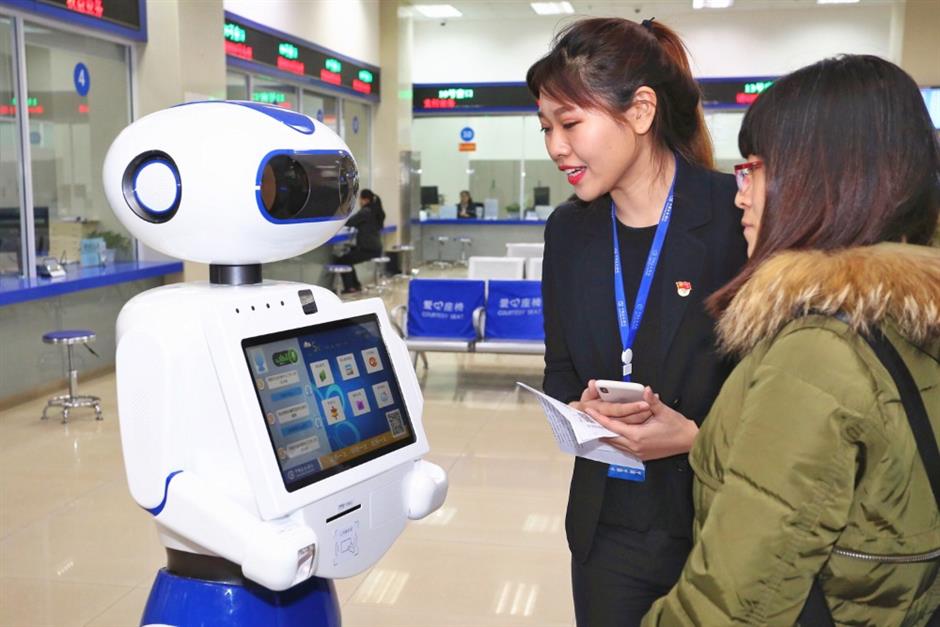 An intelligent robot at a social insurance center in Fengtai District in Beijing on March 1, 2018. (Photos: Xinhua)

Defying the current economic downtrend to register robust growth, Kingtronics and many other private firms point to the microeconomic tenacity of China as it struggles with an economic slowdown and uncertainties posed by trade friction with the United States.

About three years after China initiated the supply-side reform to restructure and upgrade its industries, economists say new momentum is emerging from the transitional labor, bolstering confidence for the "two sessions" that will outline China's development in 2019, a "key year" in its goal to build a moderately prosperous society in all respects.

As the annual sessions of China's national legislature and political advisory body in early March move to identify new engines to turbocharge the world's second-largest economy, how to help such market players tide over the tumultuous transition period is also a heated topic.

During a State Council meeting in January, Chinese Premier Li Keqiang said the country's development faces a more complicated environment this year, with growing challenges and downward pressure on the economy.

Apart from the threats of rising protectionism abroad, officials and experts also point to flaws in the domestic economy, including an oversupply of low-end products and lack of innovation. This year's "two sessions," where the government work report for 2019 will be released, are expected to renew calls for deepening the supply-side reform to move the industry up the value chain.

"Traditional export-oriented companies faced considerable difficulties during the industrial transformation in 2018," said Huang Maoxing, an economics professor at Fujian Normal University. "But after the twinge, a rebound is almost certain in 2019 thanks to new momentum accumulated in the transition."

The transition Huang referred to is now the order of the day across China. In provincial-level "two sessions" that preceded the national event, a majority of Chinese provinces lowered their GDP growth targets for 2019 and stressed high-quality development with promises to nurture new industries and upgrade traditional ones.

Fujian, known for its booming electronics and garment industries, has seen more and more factories embracing automation, leading to a 16-fold increase of imported industrial robots in the first 10 months of 2018.

In north China's Shanxi, coal firms are switching to new energy and new materials as the coal-rich province cut redundant capacities. In the past three years, Shanxi phased out 88.4 million tonnes of coal capacities but sped up new energy development, including extraction of coal-bed methane that now accounts for over 90 percent of the national total.

One firm, Shanxi Uni-moon Green Paper, is reaping early rewards from the clean energy transition. The subsidiary of a coal enterprise has developed a technology to manufacture paper out of gangue, a coal-production waste. By producing an annual 120,000 tonnes of such "stone paper," the company estimates it will save 2.4 million trees. 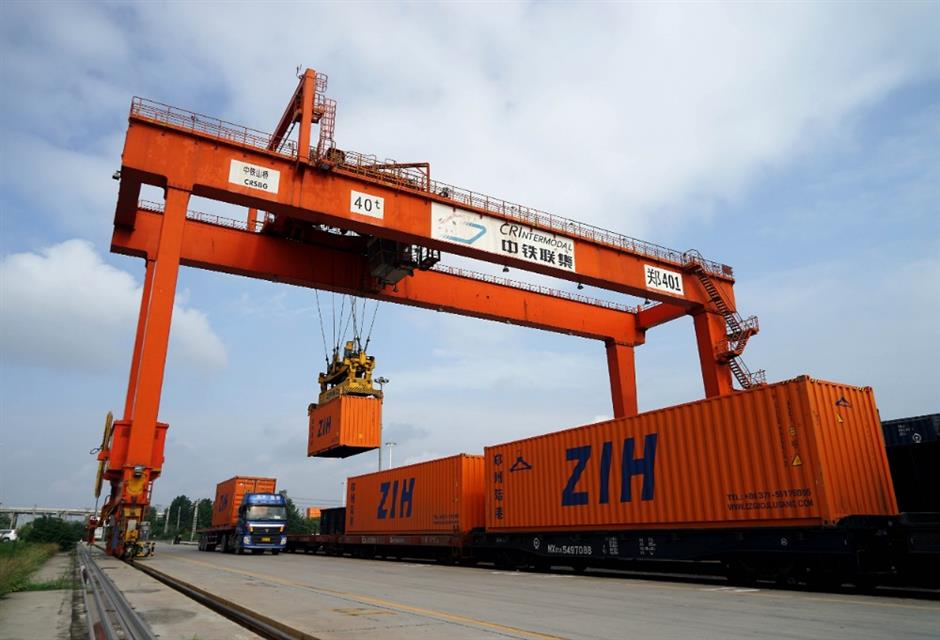 Despite the temporary loss of GDP tempo, Yan Linhu, deputy general manager of the company, spoke highly of the industry's move towards a healthier development model featuring a higher input of innovation. "The coal industry is under a lot of stress, but it's a positive sign that all companies are seeking changes," he said.

Chinese cities are also weighing in on the wave of transformation with supportive policies. Chongqing, a production base for cars and laptops in southwest China, is luring in developers of big data, artificial intelligence (AI) and industrial robots to revitalize its manufacturing sector.

In 2017, the municipality ended a 15-year streak of double-digit growth after its GDP growth slowed to 9.3 percent, which further dropped to 6 percent last year, as a saturated domestic car market dragged down the city's auto output.

Seeking a change, the Chongqing government in 2018 inked an agreement to house Alibaba's regional headquarters, hoping to benefit from the internet giant's cloud computing and AI prowess. It followed another deal between the city and Tencent, another tech heavyweight, to cooperate on big data and smart technologies.

Data has revealed signs that such efforts are paying off, according to Yi Xiaoguang, director of the Chongqing Institute of Comprehensive Economic Research, who points to a quadrupled increase in the contribution of high-tech industries to Chongqing's industrial output in 2018.

"It shows the new growth engines are gaining steam, and in due course, will rise to become the new economic pillars," Yi said.

Other good news for China's economy will come from the unified foreign investment law, which will be discussed during the "two sessions." Once adopted, it will help foster a more favorable business environment and attract more foreign investment.

The domestic market is expanding and remains strong. In 2018, China's goods consumption gained 9 percent to 38 trillion yuan (5.66 trillion U. S. dollars), continuing to serve as the biggest growth driver, according to the National Bureau of Statistics.

Furthermore, the infrastructure boom along the Belt and Road in recent years has brought many emerging markets closer to domestic producers as they seek to offset uncertainties in Western markets.

Panpan Foods, a major supplier of packaged pastries and puffed food in Fujian, testifies to the consumption upgrade in China driven by the rising purchasing power.

Cai said the consumers' hunt for premium foods is driving the company to diversify its products, come up with new tastes, and team up with Japanese experts to develop "short shelf-life" snacks welcomed by health-savvy shoppers. It is also foraying into the profitable market of assorted nuts, hailed by white-collar consumers as a "brain food."

According to a report by Bain & Company and Kantar Worldpanel, Chinese households' spending on fast-moving consumer goods (FMCG), or non-durable goods such as packaged foods and shampoos, is expected to rise 5 percent in 2018, showing that the trade tensions had a minimal impact on China's consumer market.

The industrial market also bodes well for Chinese manufacturers that climb up the innovation ladder, said Deng Xiaojun, assistant to the chairman of Datong Reciprocity Group, a Fujian-based manufacturer of industrial valves that is breaking into the global market of cryogenic valves.

"The economic slowdown in recent years had a minimal impact on our company. As long as we have innovative products, there will always be market demand," said Deng, whose company just inked a 200-million-dollar supply deal with a Mexican oil firm.

Deng hoped that the upcoming "two sessions" would focus on the financial woes of private companies as they work on reform and innovation. In particular, many small and medium enterprises faced challenges in obtaining bank loans, he noted.

A slate of supportive policies were rolled out following last year's "two sessions" that called for reducing taxes and other burdens for enterprises. China is estimated to have saved 1.3 trillion yuan for market entities in 2018. Tseng, Kingtronics chairman, believes such policies are essential for China's real economy to prosper.

"Pushing for innovation in the manufacturing sector always involves a lot of risks. Small firms, in particular, have to overcome many financial and technological hurdles, so they need strong government support," Tseng said.