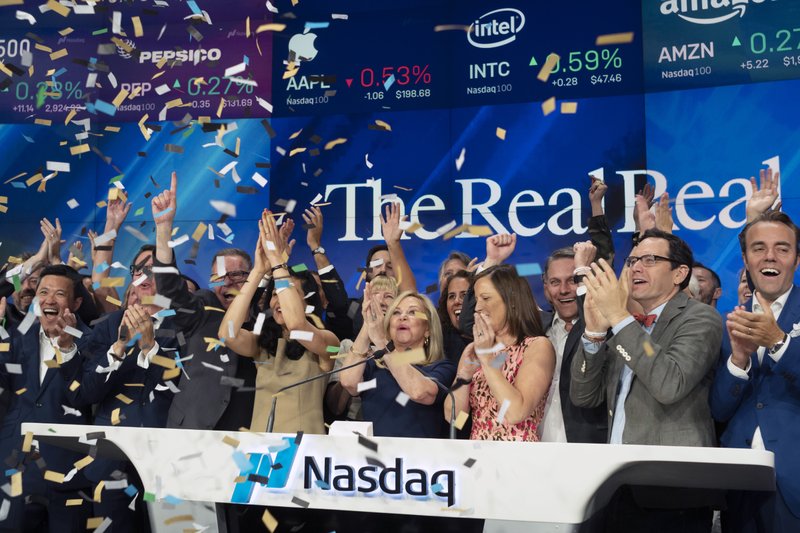 Shares of The RealReal jumped on their first day of trading Friday, as the secondhand-fashion online retailer tests investors’ appetite for the staying power of online marketplaces for pre-owned discounted Gucci and other luxury goods.

The San Francisco company, founded in 2011 by CEO Julie Wainwright, debuted on the Nasdaq Stock Market and is listed under the ticker “REAL.” On Thursday, the initial public offering of 15 million shares was priced at $20 a share, above an expected range of $17 to $19 a share. That would raise $300 million before expenses.

The RealReal says it’s the world’s largest online marketplace for authenticated, consigned luxury goods. Total revenue was $207.4 million last year, up 55% compared with 2017. As of the end of March, it offered more than 620,000 unique authenticated pre-owned luxury items bearing the brands of more than 5,500 luxury and top designers.

But it hasn’t made a profit and its losses widened to nearly $76 million last year, up from $42 million in the previous year, according to its prospectus filed with the Securities and Exchange Commission.

The move to go public comes as online marketplaces that sell used clothing and other items are flourishing as a new generation of younger shoppers don’t want to pay full price. They also are more conscious about the environment.

While for years shoppers have been buying and selling used discounted designer items at thrift shops and at eBay, this new generation of secondhand online retailers make the shopping experience easier, with new technology and services.

Meanwhile, Neiman Marcus in April bought a minority stake in resale site Fashionphile. As part of this deal, at select Neiman Marcus stores, customers are able to not only receive an immediate quote for their items from Fashionphile but also payments they can spend immediately on new luxury items at the store. Neiman Marcus says it will not be selling any preowned merchandise at its stores.

The RealReal Inc. offers a “white glove” service where consignors, those that are selling their used designer goods, make an appointment with one of its luxury managers and receives a complimentary consultation at their home. It also operates 11 luxury consignment offices in key cities like New York and Los Angeles. It also operates three stores — two in New York and one in Los Angeles.

The RealReal says it has been able to build trust among its customers. It says it employs more than 100 gemologists, horologists, brand experts and art curators and says that its authenticators are highly trained, experienced experts in their respective fields. The company says that as buyers become consignors and vice versa, it creates a “unique flywheel that further accelerates our momentum.” Through March 31, 53% of its consignors are buyers and 13% of its buyers are consignors, according to the prospectus.

The RealReal says that 80% of its consignors were female, primarily with household income of about $50,000.

The RealReal, however, has also run into trouble with other luxury brands.

Last November, Chanel filed a lawsuit against RealReal, alleging that the online retailer misrepresented certain counterfeit Chanel products as authentic ones. It also alleged that the resale of Chanel products confuses consumers into believing that Chanel is affiliated with The RealReal. The RealReal has maintained that the suit is unfounded. The litigation in its early stages and the final outcome is uncertain, according to the prospectus.