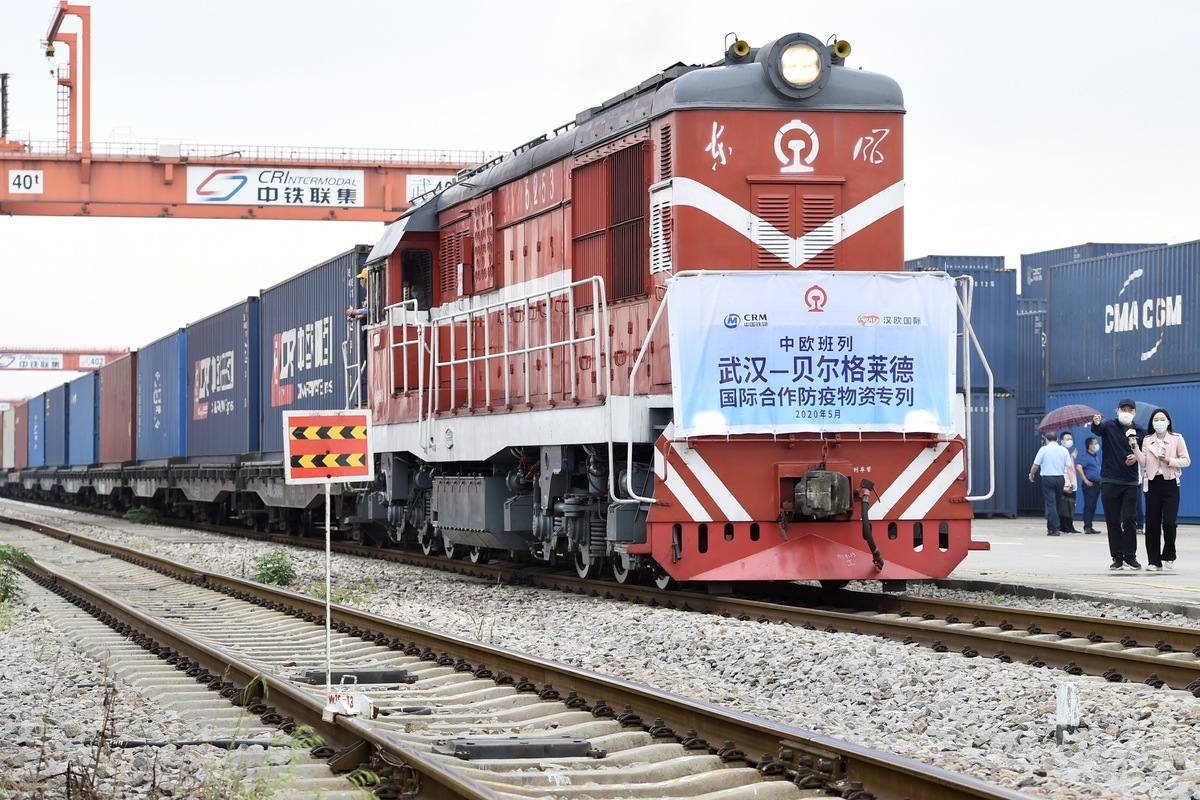 The China-Europe Railway Express is expected to provide rising opportunities for economic cooperation between China and Europe, said an expert.

Katarina Zakic, research fellow at the Institute of International Politics and Economics in Belgrade, Serbia's capital, said the railway has a unique opportunity to become an even more valuable part of the transportation network between China and Europe.

"The number and the volume of goods transported via the China-Europe Railway Express network are increasing. More and more companies want to use this network," Zakic said.

She said China and the countries within the European Union have good economic relations, and the pandemic has prompted the growth of trade between China and Europe.

China overtook the United States last year to become the EU's largest trading partner for the first time, with exports and imports both increasing despite the COVID-19 pandemic, according to Eurostat, the EU's statistical body.

Last year, the China-Europe Railway Express played an important role in maintaining smooth logistics and stable supplies between China and Europe amid the coronavirus outbreak, and the rail service became a secure and rapid way to transport goods. The main products transported during those times were medical supplies－masks, protective gowns, protective glasses, gloves and respirators.

According to China State Railway Group Co Ltd, a total of 12,400 China-Europe freight train trips were made in 2020, up 50 percent year-on-year.

With 98.4 percent of the containers fully loaded with goods, the trains reached 21 countries and 97 cities in Europe.

Citing the bilateral investment agreement between China and Europe, Zakic said the two sides should see strong momentum in trade growth in the future.

"If everything goes well, it will be a huge step in the right direction for both parties," she added.

"It is also encouraging that the latest Chinese 14th Five-Year Plan (2021-25) … references new opportunities for foreign investors in China. China will allow easier access for foreign companies to the Chinese market. It will also permit new fields of industry and services in which foreigners can invest. All this will improve economic relations between China and the EU. The China-Europe Railway Express will thus benefit."

In March this year, the 10th anniversary of the opening of the China-Europe freight train service was celebrated.

Looking ahead, Zakic took a rosy view on future development of the China-Europe Railway Express, saying railway freight has unique advantages that are vital in today's world.

"It is a safer way of transporting goods than airfreight or sea freight because its functioning is not so dependent on weather conditions. It is a cheaper method of transport than airfreight and takes less time than sea freight," she explained. "The most important advantage is that railway freight is more environmentally friendly than airfreight, and emissions of carbon dioxide are only slightly higher than ocean freight emissions. Since China and the EU are both committed to building a more sustainable and green environment, railway transport will have an important place in their relations."

She added that more efforts are needed to make the China-Europe Railway Express network become even more competitive. "On the one hand is the problem of different railway gauges that exist on this route… Even though the time used to transport cargo from one train to another is significantly faster than before, there is still room for improvement. On the other hand is the level of administrative work that needs to be done for the trains to pass national borders. The main thing is to work upon the digitalization and border procedures to shorten the time required for trains to cross borders."

Zakic said Serbia, located in the center of the Balkan Peninsula, is hoping to become part of the broader China-Europe railway network.

China has invested through loans, acquisitions and joint ventures more than 10 billion euros ($11.81 billion) in Serbia, and in various projects such as transportation, energy, metallurgy and manufacturing, Zakic said.

One of the first projects that China and Serbia cooperated on was the construction of the Belgrade-Budapest Railway, worth some $1.41 billion. Thanks to this railway, Serbia will shorten travel time from Belgrade to Budapest by half.

"Serbia has been a firm supporter and friend of China and has been from the start a member of two very well-known initiatives, namely 17+1 and the Belt and Road Initiative," she added.

"Hopefully, with those projects, Serbia will join the European highway and railroad network, and become more competitive in the international market."