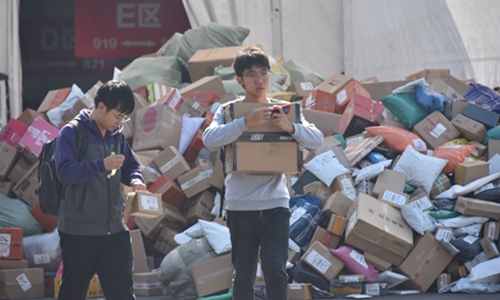 Two students from Zhejiang University pick up their packages from a "package mountain" at a basketball court on campus on Friday, as the double 11 shopping spree has led to a peak delivery period this week. (Photo: IC)

Bloomberg's chief economist said on Friday that he believes China can manage the economic slowdown, and that the country's services industry has a larger role to play.

Speaking on the sidelines of the 2019 New Economy Forum (NEF) in Beijing, Tom Orlik, chief economist at Bloomberg, said "China's economic structure has changed, and there's a larger role for services, which means [it] can have stable employment even as growth slows."

He added that the recent slowdown is "certainly not good news for those other countries that benefit from China's growth."

A recent Bloomberg report on the new economy drivers and disrupters shows China ranked fourth in the drivers' sector and 50th in the disrupters' sector.

Orlik told the Global Times on Friday that the determinants of economic competitiveness have changed in the new economy.

China has advantages in the old determinants, but also faces challenges from disruptive forces, including protectionism and climate change, Orlik said.

Orlik also warned of the impact on world economy from the trade war.

"The pace of the global growth has halved and a big reason for that is the trade war," he said.

According to Orlik, if a phase-one trade deal is reached, the US and China would both benefit significantly.