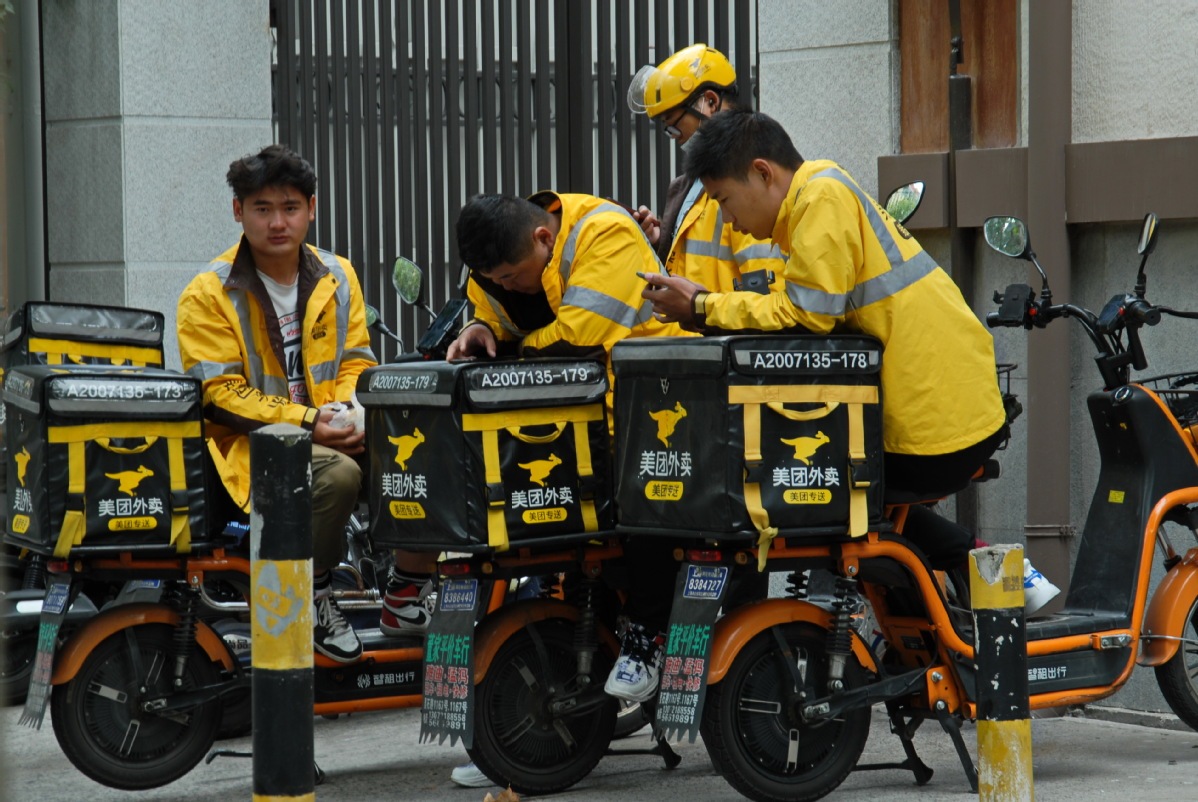 Food deliverymen wait for orders on a street in Shanghai. (Photo: China Daily)

New orders accelerate in October on back of strong domestic demand

The recovery in China's services sector activity continued for a sixth straight month in October, thanks to the country's effective containment of the COVID-19 epidemic and supportive policies to help the country's smaller companies, a private survey showed on Wednesday.

Driven by stronger domestic demand, China's services sector continued to recover with the Caixin China General Services Purchasing Managers' Index, which gauges business activities of the sector and surveys mostly smaller business, rising to 56.8 in October from 54.8 in September.

The reading was above market expectation of 55 and showed the services sector stayed in expansionary territory for six consecutive months. The index was also in line with the uptick in the official services PMI released by the National Bureau of Statistics over the weekend which rose to 55.5 in October from 55.2 in September.

"The rise in the Caixin services PMI points to a continued recovery in the services sector thanks to the successful containment of COVID-19, the associated relaxation of social distancing requirements and Beijing's continued policy support for small and medium-sized enterprises," Lu Ting, chief China economist at Nomura Securities, said in a research note.

Economists expect China's services sector to recover further in the coming months despite lingering uncertainties and risks such as weakening external demand due to the resurgence of the COVID-19 cases.

"The services sector took the lead in China's economic recovery in the third quarter and we expect a continued improvement in the sector in the coming months. However, we believe sporadic local outbreaks remain a risk, as the rest of the world is still tackling the pandemic, which should constrain the pace of recovery in the services sector, especially the catering, hotel and passenger transport industries," Lu said.

Growth in new orders in the services sector accelerated in October as demand continued to recover and more new products were available in the market, according to the Caixin survey. The improvement was mainly driven by stronger domestic demand as the new export orders index dipped further to 47.3 from 48.4 during the same period, suggesting weakening external demand.

Wang Zhe, a senior economist at Caixin Insight Group, said that supply and demand were both strong in the manufacturing and services in October with key indicators such as new orders, purchases and inventories performing strongly and entrepreneurs showing confidence in the economic outlook for the year to come.

Employment situation in the manufacturing and services sectors also improved steadily in October as market sentiment picked up. But external demand may come under pressure due to the repeated COVID-19 outbreaks in overseas markets, which is one of the key factors that could affect the economic recovery in the coming months, Wang said.

"Business activities are expected to further recover as household income and consumption in some areas that lagged behind are likely to continue to improve," Wang Tao, chief China economist at UBS Securities, said in a research note. Wang forecast that China's real GDP growth rate could rebound to around 5.5 percent year-on-year in the fourth quarter and the country will likely record a full-year growth rate of 2.1 percent.