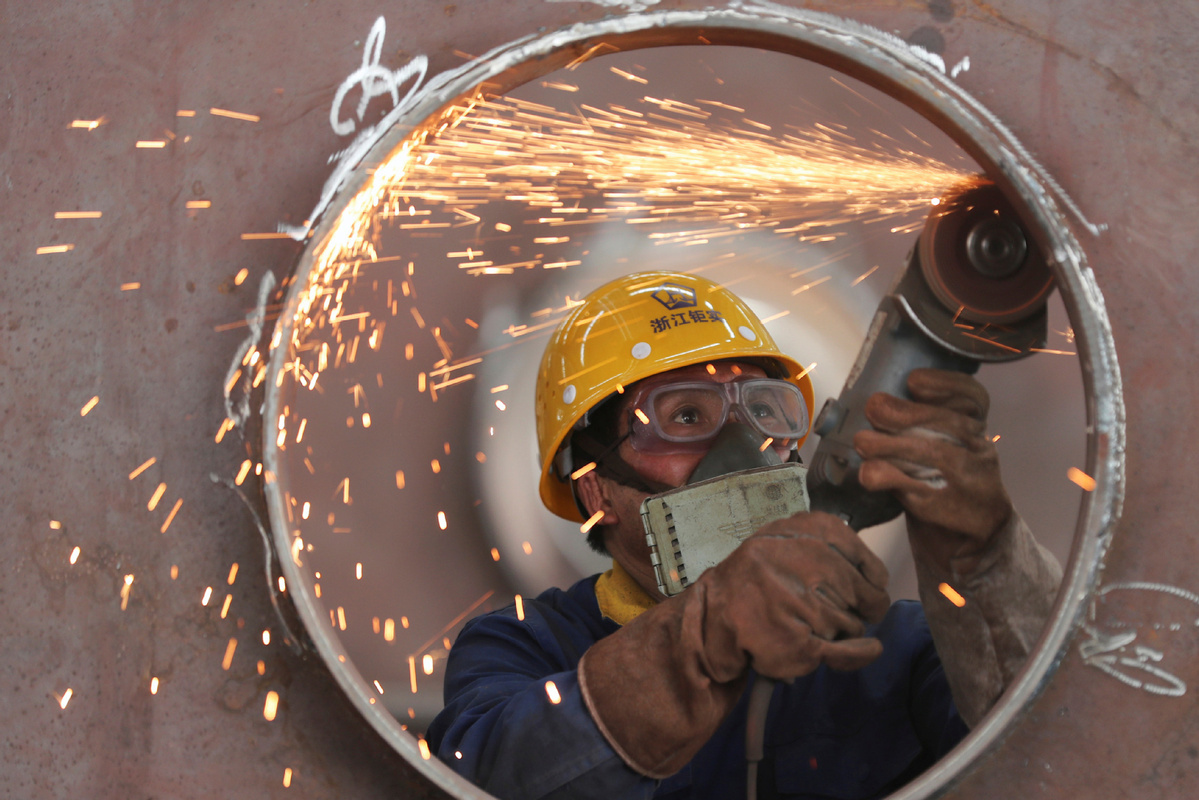 An employee works on a production line manufacturing steel structures at a factory in Huzhou, Zhejiang province, on May 17, 2020. (Photo: Agencies)

China's services sector saw the strongest expansion in a decade last month as the resumption of business activity accelerates and the country's economy continues to recover, a private survey showed on Friday.

The Caixin China General Services Purchasing Managers' Index rose to 58.4 in June from 55 in May, the highest level since May 2010, according to a survey by media group Caixin. The index has been in expansion territory for two straight months. A reading above 50 represents an expansion while one below 50 reflects contraction.

Caixin's index was in line with the official PMI released by the National Bureau of Statistics on Tuesday, which showed the economy has seen strong recovery momentum as both manufacturing and services expanded at a faster pace in June.

"Demand and supply in the manufacturing and services sectors recovered simultaneously in June. As the COVID-19 pandemic dealt a bigger blow to services, the sector has staged an even stronger recovery than manufacturing," said Wang Zhe, a senior economist at Caixin Insight Group.

The better-than-expected PMI data has prompted many economists to raise their GDP growth forecast. Many of them believe that the country's growth rate in the second quarter is likely to turn positive, a substantial improvement from the 6.8 percent contraction in the first quarter.

China's economic recovery is forecast to accelerate in the year's second half on the back of strong domestic policy support and the reopening of overseas markets. GDP growth is likely to rebound to about 5 to 6 percent in the second half while the growth rate is predicted to rise to around 7.5 percent next year, according to analysts with UBS Wealth Management.

Looking at the detailed data, new orders in the services sector rose to 57.3 in June from 55.8 in May, the highest level since September 2010. As epidemic control and prevention measures have been gradually loosened, business activities continue to recover－corporate confidence reached the highest level in the past three years in June, Caixin's survey said.

But challenges remaining in the job market require more targeted measures, and ensuring stable employment continues to be a key, daunting task for the government, economists said.

"Employment remains a top priority of the government. The subindexes of employment in the manufacturing and services sectors were still in contraction territory in June. Faster production resumption as well as more targeted policies are needed to help resolve corporate difficulties," said Wang with Caixin Insight Group.

Economists are also calling for more coordination between monetary and fiscal policies to help consolidate China's economic recovery. Meanwhile, some said the recent rebound of new COVID-19 cases in Beijing and its potential impact on business resumption deserves attention.

Lu said further cuts in the reserve requirement ratio and medium-term lending facility rate by the People's Bank of China remain on the table, and the central bank is also likely to increase the use of major lending facilities to commercial banks to ensure ample liquidity in markets, especially after recent cuts in re-lending and re-discounting rates.