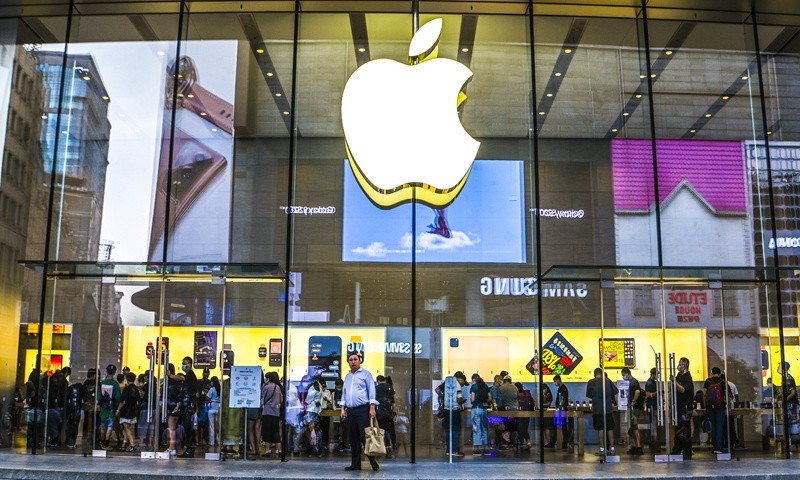 A flagship store of Apple in Shanghai (Photo: VCG)

An iPhone user in Shanghai took Apple Inc to court for charging higher fees than Google charges its Android users when consumers purchase memberships of applications on the App Store, claiming the company was abusing its dominant market position, hoping to raise users' awareness about the over-charging and monopoly problem of Apple.

The consumer demanded 100,000 yuan ($15,467) in compensation and a public apology from Apple. Shanghai Intellectual Property Court has accepted the case, according to media reports.

The Global Times reporter found that iPhone users have to pay 19 yuan per month for Chinese video site Youku's membership, while Android users only need to pay 15 yuan per month.

A staffer from Apple told the Global Times on Monday that the pricing of applications' memberships is decided by applications themselves, which can choose to charge different prices on the App Store and on Android's platform.

However, a staffer from Youku told the Global Times that if consumers purchase the application membership through their Apple ID accounts, they have to pay an extra commission fee.

According to the plaintiff's attorney Wang Qiongfei, co-founder of Kinding Law Firm, Apple charges a commission fee for all virtual products and services for sale on the App Store at a "tax" rate of 30 percent, taking advantage of its platform's dominant market position.

"While application developers don't have to pay such a commission fee for their virtual products sold on the application stores of Android's open platform, they have to pay Apple such fees. The cost is eventually passed on to consumers," Wang told the Global Times on Monday.

Wang pointed out that it is not a unique problem that Chinese consumers face, but instead it is a universal issue that iPhone users across the world face, noting that his client, who is also a legal practitioner, hopes her lawsuit can raise users' awareness of the over-charging and monopoly problem of Apple, instead of it being a simple pricing problem.

According to Wang, the anti-monopoly enforcement agencies in the US and European Union have both noticed this problem and launched investigations or lawsuits over the past years, and there should be someone in China who stands up to speak for all consumers on this issue.

The loss outweighs the gain for consumers to file a lawsuit against such a company since it takes long time, usually several years, and costs an enormous amount, usually several millions of yuan, Wang said.

"If we can win the lawsuit and change the situation, it will be meaningful to both consumers and app developers," said Wang, who is prudent and optimistic about the case, since he believes Apple's behavior is problematic and infringes on anti-monopoly law.

"But we are still weak compared with the tech giant, so we are prudent about the final result," Wang said.