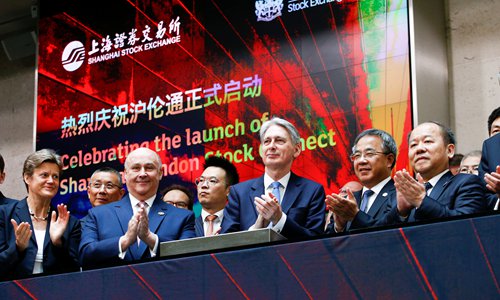 Britain's Chancellor of the Exchequer Philip Hammond (center) and Chinese Vice Premier Hu Chunhua (center-right) applaud after the opening of the markets at the London Stock Exchange on June 17, 2019. (Photo: AFP)

The long-awaited Shanghai-London Stock Connect went live on Monday afternoon (Beijing time), enabling British companies to raise funds in Shanghai and vice versa.For the next step, China will unswervingly further push the reform and opening-up of the domestic financial markets, according to a statement by the China Securities Regulatory Commission (CSRC) on Monday.City of London Corporation Policy Chair Catherine McGuinness called launch of the program "a gamechanger" in deepening China-UK financial cooperation and expanding access to the Chinese mainland's capital markets. "It means global investors can now benefit from China's growth through London, while UK-listed companies are able to access Chinese investors directly," McGuinness told the Global Times in London on Monday. The program also marks the gradual realization of stock link programs between A-share markets and overseas stock exchanges, and similar programs between China's stock exchanges and those in Tokyo, New York and Moscow can be expected, one expert said. This, along with a number of other financial opening-up measures recently announced by the central government such as easing market access to certain financial businesses for overseas banks, are an important step in China's financial markets to achieve the opening-up "of a wider range and a higher level," Yang Delong, chief economist at the Shenzhen-based First Seafront Fund Management Co, told the Global Times on Monday.The Shanghai Composite Index rose by 0.2 percent to 2,887.62 points on Monday, while the Shenzhen Component Index slipped by 0.33 percent to 8,780.87 points. Huatai debut The Shanghai-London Stock Connect program allows companies listed on either exchange to sell Depositary Receipts (DRs), bank-issued certificates representing ownership of a set number of company shares that can be listed and traded independently from the underlying stocks.On Monday, Nanjing-based Huatai Securities officially launched GDRs on the London Stock Exchange, the first Chinese company to make a London market debut under the stock connect program, the company confirmed to the Global Times on Monday. Huatai expects to raise $1.692 billion at most with each GDR priced at $20.50, which would make the launch the largest DR IPO in the world since 2013, the company disclosed. Dong Dengxin, director of the Finance and Securities Institute at the Wuhan University of Science and Technology, told the Global Times on Monday that compared with stock connect programs between the mainland and Hong Kong, UK investors don't need to open an account in Hong Kong to invest in A shares but can trade directly in London, which makes the process more convenient. He also said that compared with direct listing, a DR IPO has more guaranteeing agencies and therefore is more easily accepted by overseas governments. "It will be much easier to spread DR launches in overseas countries," Dong said. Demand high  According to a report by the BBC on Monday, more than 260 of the 1,500 companies listed in Shanghai will be potentially eligible to list in London via the stock link project. One Reuters report has cited market doubts about DR demand via the stock connect between Shanghai and London. Dong said that although private overseas investors might not be that interested in A-share companies, overseas passive funds that follow international indexes will eye Chinese shares as a way to diversify risks, particularly as A shares are increasingly recognized by international stock indexes. The BBC also noted that UK investors are seeking to "tap into" China's growing market, as China is expected to have more than $17 trillion in assets under management by the end of 2030.