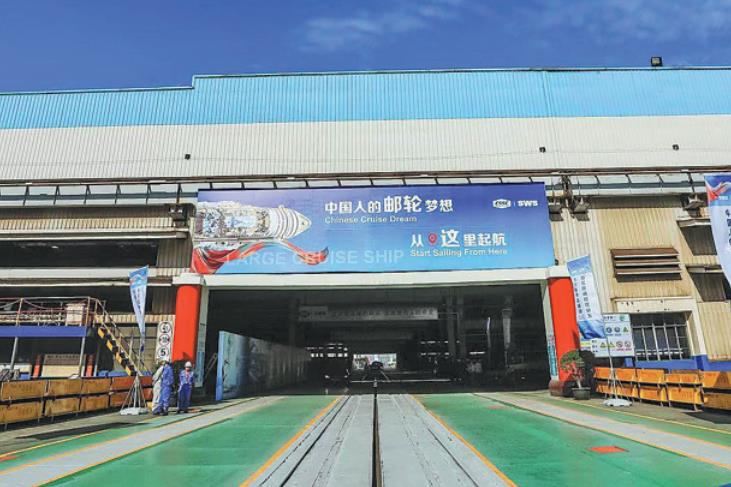 A view of the steel plate cutting and processing center of Shanghai Waigaoqiao Shipbuilding. (Photo provided to China Daily)

The launch of China's first cruise tourism development demonstration zone in Shanghai marked the emergence of a hundred-billion-yuan industry chain in the country, and it is only a matter of time before China becomes the largest cruise market in the world, experts said.

Getting the nod from the Ministry of Culture and Tourism in July, Shanghai's northern Baoshan district unveiled its cruise tourism demonstration zone in October, which is set to tap the cross-industry cruise related business opportunities including tourism, consumption and business operation among others, according to a report in The-Paper.cn.

After rapid decade-long development, China has become the world's second-largest cruise market by passenger volume. In 2018, the country had 4.89 million cruise passenger trips, according to the green paper on China's cruise industry jointly published by Shanghai University of Engineering Science and Shanghai International Cruise Business Institute.

The Wusongkou Cruise Port, which is currently the world's fourth-largest and Asia's largest, has so far seen more than 2,000 cruise vessel trips and over 13 million passenger trips in its more than seven years of operation, said Wang Hong, Party secretary of Baoshan district.

CCTD expects to invest 50 billion yuan ($7.14 billion) over the next decade and operate a Chinese-funded cruise fleet in Shanghai by 2030.

"We are aiming to build a complete cruise industrial chain, investing 50 billion yuan in the next decade to form a Chinese cruise fleet of between eight and 10 cruise vessels," said Yang Guobing, chairman of CCTD.

"The cruise industry offers opportunities for every Chinese person to enjoy the quality service, and the prosperity of this sector will benefit all related businesses, be it manufacturing, raw materials, or consumer products and services," said Zhou Qi, vice-president of Shanghai Waigaoqiao Shipbuilding.

The cruise industry is one of the most dynamic industries of the world. The 433 cruise vessels in operation worldwide received 28.5 million passengers in 2018, creating 1.11 million job opportunities directly. These employees' combined income reached $45.6 billion and the overall industry scale reached $123 billion last year, according to CCTD.

Baoshan district and CCTD are working together to build and develop a 2-square-kilometer international cruise industrial park, and to make Shanghai a global influential headquarters for the cruise industry, according to Yang.

Being the location of the first Chinese cruise tourism demonstration zone and the Wusongkou Cruise Port, Baoshan district has tied its development to the cruise industry, and will strive to build an international cruise city home to a cruise industrial chain with a value of 100 billion yuan in the next decade, said Wang from Baoshan district.