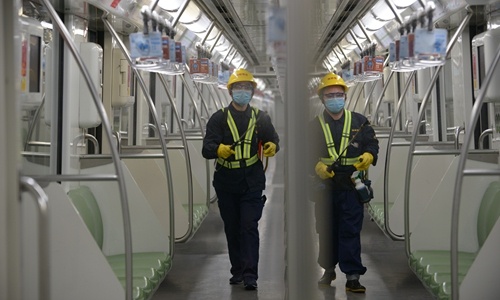 Shanghai Metro Line 2 is scheduled to be upgraded to become the world's first metro line with two signal systems, ensuring the city's metro works efficiently especially during rush hours and even if the major signal system fails, according to media reports on Monday.

Metro Line 2 is one of the busiest lines across Shanghai downtown because it links with the city's Pudong and Hongqiao airports. It has 1.5 million daily passenger trips on average, and 2 million passenger trips during peak times, according to Shanghai Fabu, the official social media account of the Shanghai municipal government.

The tracking interval of trains on Metro Line 2 is expected to shorten to 120 seconds from the previous 150 seconds once the new system is applied, which indicates that trains will be able to arrive at the station seamlessly.

A total of 100 trains on Metro Line 2 will have their signal systems upgraded, and the related work has so far been finished on 31 trains, said Shanghai Fabu.