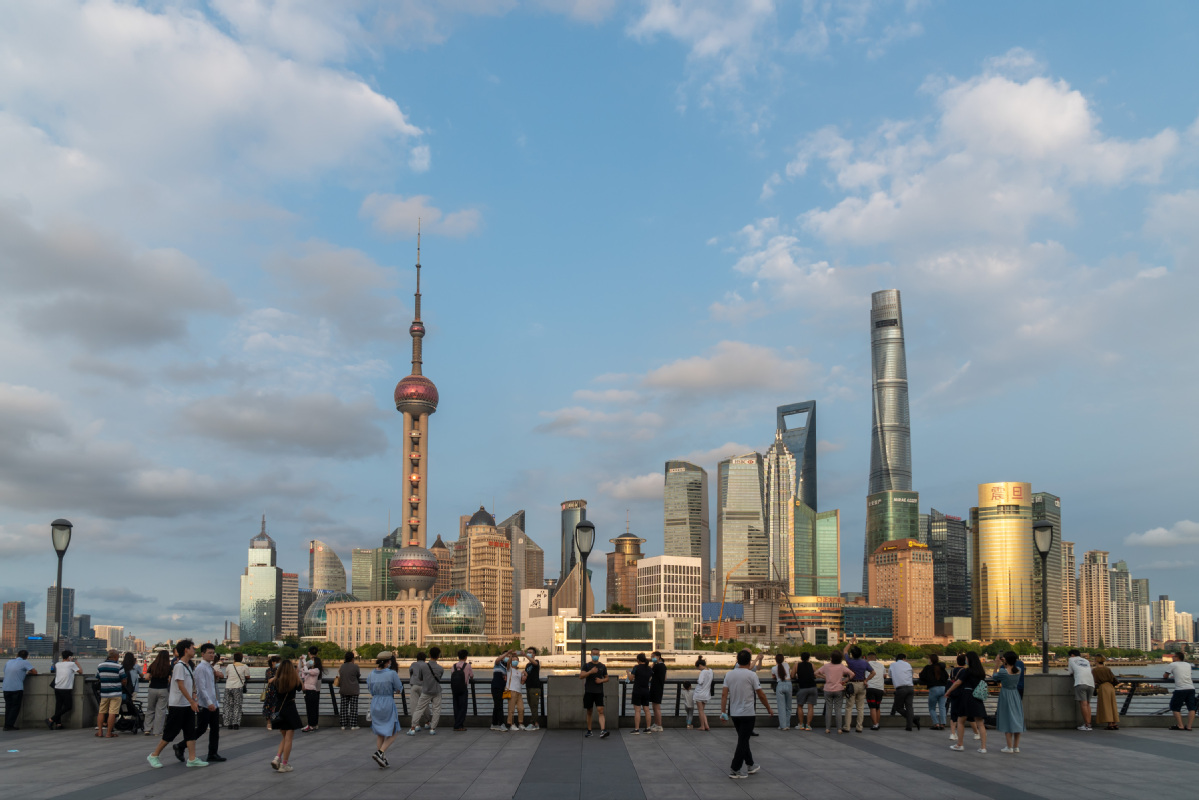 Tourists admire views at the Bund in Shanghai in September. PHOTO BY WANG GANG/FOR CHINA DAILY

Shanghai should continue efforts to further open up its market and keep up with the most advanced technologies and trends so that it can grow into a key hub linking the domestic and international markets in light of the country's new development strategy, said top local officials and global industry leaders.

Li made the comments during the 33rd forum of the International Business Leaders' Advisory Council held on Friday night. Initiated in 1989, the council has grown into an international think tank for Shanghai where multinational companies' top executives gather annually to share their knowledge and experiences.

Efforts should be accelerated to build Shanghai into a central hub for the domestic circulation and a strategic link connecting the domestic and international markets, Li said.

Shanghai will deepen its high-quality reform and opening-up, with sharpened focus on systematic opening-up of rules, regulations, management and standards.

By creating an increasingly marketized, legalized and international business environment, more policies and mechanisms with international competitiveness will be rolled out in Shanghai, Li said.

At the forum, Shanghai Mayor Gong Zheng said companies from all over the world are not only welcome to get more deeply rooted in Shanghai but are encouraged to bring their experiences, ideas and industry insights, which can translate into material policies facilitating Shanghai's high-quality development.

In all, 40 multinational executives from 22 cities from all over the world attended the online forum, sharing their suggestions aimed at further facilitating Shanghai's development.

Maurice R. Greenberg, chairman of New York-based Starr Insurance Companies, has attended the IBLAC forums for 30 years. In his proposal to the municipal government this year, Greenberg said Shanghai should carry out deepened opening-up so that domestic growth can coordinate with international trade and investment. China's dual-circulation development pattern has underscored the right path that Shanghai should take, he said.

While further improving the environment for foreign investment, intellectual property rights should be better protected by providing equal footing for both domestic and foreign companies, he said.

Severin Schwan, CEO of Roche Group, expressed excitement over Shanghai identifying biomedicine as one of its strategic industries. As Shanghai aims to build a world-class biomedicine industrial cluster which will be "in China, for the world", a higher-level opening-up should be created by facilitating free flow of talent and seamless cooperation between medical organizations and academic institutions. The local medical market should be made more accessible, he said.

In this sense, there should be more investment in the research and development of green technologies. Startups specializing in new energy and green energy should be supported. Universities in and around Shanghai should conduct research into the applications of these technologies so that the metropolis can achieve more robust growth, Luksic said.