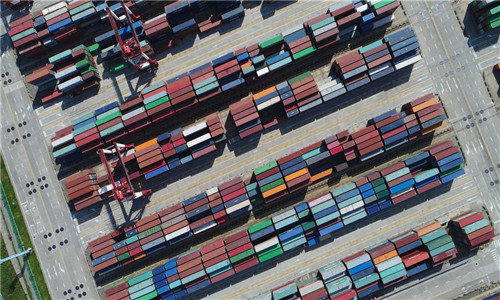 Aerial photo taken on April 23, 2017 shows a container wharf of Yangshan Port in Shanghai, east China. Yangshan Port is China's first port built on islands. Shanghai, one of the most important cities in east China, has contrainer trade with more than 500 ports of 214 countries and regions. In 2016, Shanghai port has kept standing at No. 1 in container throughput in the world for seven years in a row. (Xinhua/Ding Ting)

Compared with major international ports in other countries that have been feeling the pinch amid the COVID-19 pandemic, thousands of containers are handled in Shanghai by auto-guided vehicles and bridge cranes that can be controlled and monitored remotely.

The busy scenario vividly showcases how the Chinese economy, highly integrated with the world, has been injecting momentum into the global recovery.

While Pudong is seen as a pioneer in free trade, opening-up and international cooperation over the past 30 years, the port of Shanghai — located in the district — has a new historical mission of being a bridge connecting China with economies along the Belt and Road routes and the Yangtze River Economic Belt -- the country's economic powerhouse.

The robust growth of throughput at the Shanghai port in October can be attributed to rising demand from the third China International Import Expo in Shanghai. But it also illustrates the increasingly strong economic development in China and reflects the strong ties between Shanghai and the global economy.

According to Fang Huaijin, vice president at Shanghai International Port Group, the port's throughput has been steadily growing despite the impact of the pandemic, but it has been especially propelled by rising external demand since April.

"The rapid recovery also pointed to the potential and tenacity of the Chinese economy," Fang told the Global Times. As the country was the first to contain the epidemic, with its comprehensive supply chain and role as a manufacturing powerhouse, it has also been playing a vital part in supporting the world recovery, he said.

"As the fastest-recovering economy, China will no doubt bring more stimulus to world trade."

Shanghai is also deploying frontline technology to better serve the world's demand. At Shanghai's Yangshan Port, the world's biggest automated terminal, the operation process is fully controlled by the terminal operating system. The port can handle around 4 million TEUs annually at the moment, but will expand its capacity to 6.3 million per year in the long run.

Though some US politicians have been advocating decoupling from China, the increasing trade volume between China and the US via the port tells a different story, Fang said.

According to China's General Administration of Customs, in the first 10 months of this year, trade between China and the US increased 3.9 percent year-on-year to 3.2 trillion yuan ($483 billion). ASEAN as a group became China's biggest trade partner, with 3.79 trillion yuan of trade in total.

As a manufacturing hub catering to the rest of the world, the Chinese market in the past decades has provided foreign business with great benefits, Denis Depoux, global managing director of Roland Berger, told the Global Times in a recent interview, adding that the shift toward a more balanced model focusing on exports as well as the domestic market, is also one that will fuel its growth and benefit more foreign businesses.