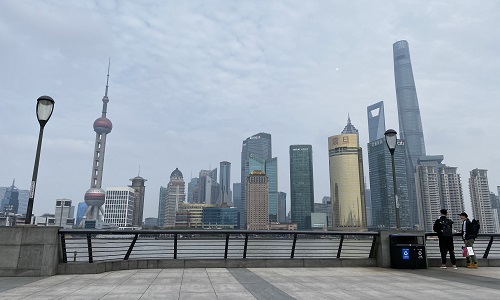 Two tourists take photos at the Bund by the Huangpu River in Shanghai. (Photo: Global Times)

Statistics show that most sectors in the city have been hampered but some sectors, including information services, finance, education, health, social work, information technology and foreign direct investment (FDI), saw growth amid the COVID-19 pandemic.

Output by large-scale industrial firms across the city slumped by 17.4 percent to 644.48 billion yuan.

However, the output value of information technology and new-energy vehicles increased by 15.3 percent and 5.7 percent respectively. The output volume of smartphones saw growth of 33.7 percent.

The actual amount of FDI Shanghai received reached $4.67 billion in Q1, an increase of 4.5 percent.