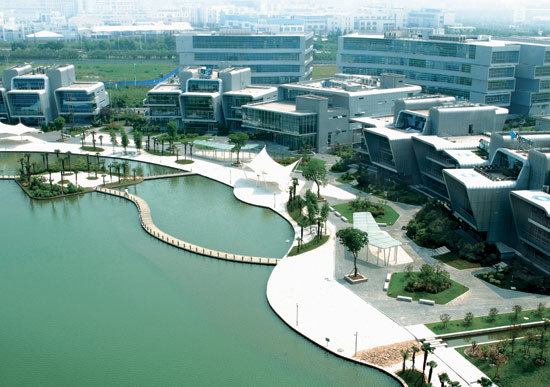 Ten years after its approval from the State Council, Zhangjiang National Innovation Demonstration Zone in East Shanghai has grown into a cradle for strategic emerging industries and innovation, city officials said.

Zhangjiang has become the frontline of innovation in Shanghai. By the end of last year, up to 330 national-level research and development institutions have been set up in the zone. More than 100,000 technology companies have been registered here.

Over the past 10 years, Zhangjiang has been witness to the building of a complete and advanced integrated circuit industrial chain . The annual output of IC companies topped over 180 billion yuan ($27 billion) in 2020, taking up 20 percent of China's total.

Biomedicine companies' advances are another feature of Zhangjiang's development over the past decade. China's central regulator has approved 99 innovative pieces of medical equipment since 2014, of which 18 came from Zhangjiang. Among the eight antibody drugs approved and available in the market last year, five were developed by companies based in Zhangjiang.

Development of artificial intelligence has also sped up. Zhangjiang has now attracted more than 2,400 AI companies, accounting for 70 percent of the total in Shanghai.

Up to 820 service institutions and incubators have been founded in Zhangjiang to facilitate innovation and nurture startups. By the end of last year, a total of 32 Zhangjiang-based companies were listed on the technology-focused STAR Market at the Shanghai bourse, which was about one-seventh of the country's total.

Despite the COVID-19 epidemic, companies in Zhangjiang with an annual income of at least 20 million yuan saw their total revenue exceed 6.2 trillion yuan last year, up 10.8 percent from a year earlier. The contribution of these companies has helped stabilize Shanghai's economic growth, Shanghai vice-mayor Wu Qing said.

Zhang Quan, director of the Science and Technology Commission of Shanghai, said Zhangjiang should build more national-level laboratories and technology infrastructure to help improve China's strategic technological strength. Long-term basic scientific research should be stressed in Zhangjiang, as they are key to technology breakthroughs.

More talent from home and abroad should be welcomed in Zhangjiang, Zhang said. A deepened reform in the science and technology system should be conducted by carrying out more incentive plans and completing people's rating systems. Cooperation between domestic and international institutions should also be stressed, he added.