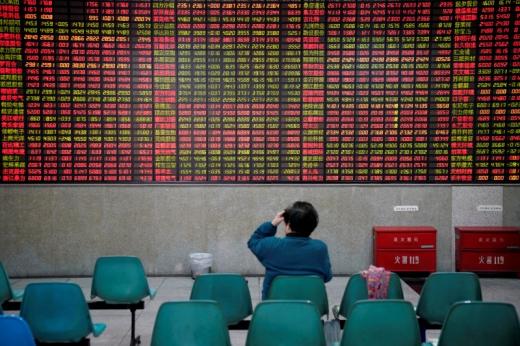 An investor looks at an electronic board showing stock information at a brokerage house in Shanghai, China. Reuters photo

China stocks tumbled on Tuesday as a global market rout intensified, with the Shanghai index posting its biggest loss in nearly two years on worries that inflationary pressures will prompt central banks to raise rates faster than expected.

Chinese markets had bucked the global downdraft on Monday.

“We see little chances for a further steep correction in the A-share market, but for the moment investors shall be wary of liquor makers and home appliance makers that had rallied strongly in 2017, ” said Yan Kaiwen, an analyst with China Fortune Securities.

“The slump on the Wall Street could have limited impact on the A-share market, unless there is a stock market crash in the US,” Yan added.

A fresh wave of Chinese companies suspended trading in their shares to avoid margin calls, with investors also spooked by China’s intensified crackdown on shadow banking.

Still, losses in China were not as sharp as some other Asian markets, partly due to Beijing’s strict capital controls, which help shield the market from global volatility.

But small caps, which last week suffered their biggest weekly loss in a year, continued to underperform blue chips, as the threat of margin calls mounts.

On Monday, over 50 companies announced share suspensions as a growing number of companies took measures to avoid forced liquidation.

According to an estimate by Sinolink Securities, as of Jan 31, 1,066 cases of margin calls had been triggered, involving shares in 608 listed firms, and the list will grow if prices fall further.