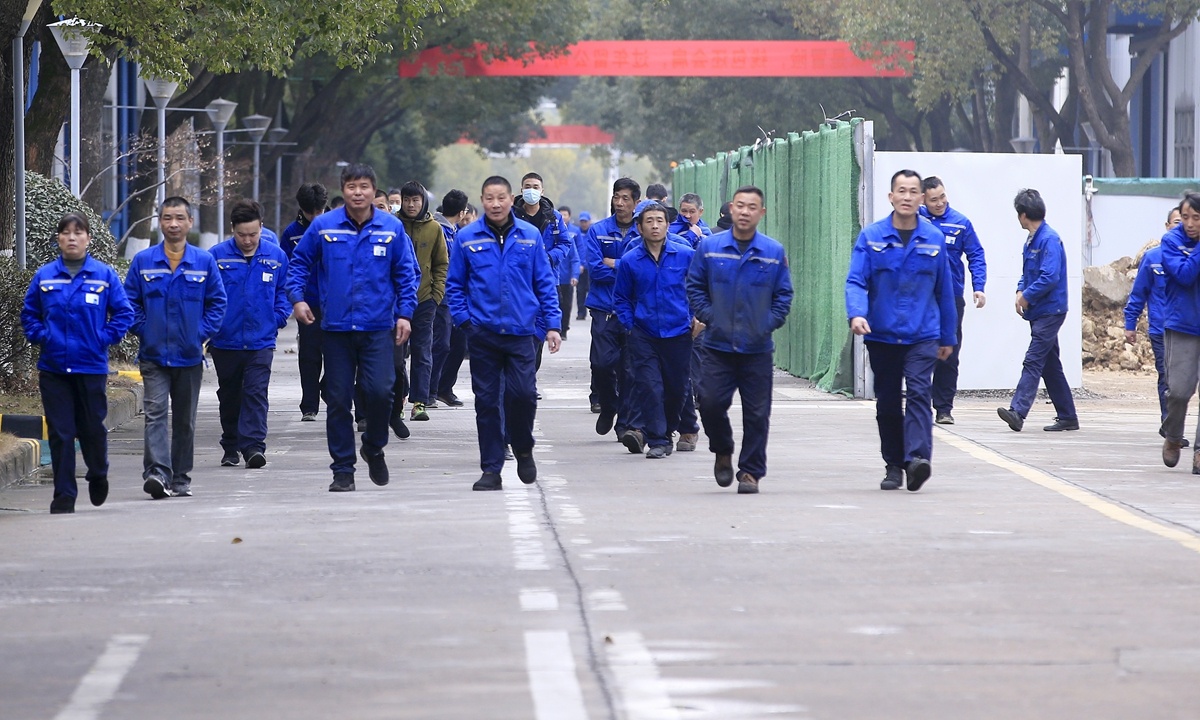 Workers from Vie Group in Diankou of Shaoxing City in East China's Zhejiang Province head to canteen for lunch on Thursday. (Photos: GT)

With the Spring Festival, the most important traditional holiday for family reunion in China, only days away, governments of all levels and enterprises of all scales across China for the first time have encouraged residents to celebrate the holiday at their place of work or where they live in order to support the national anti-COVID-19 campaign, instead of going back to their rural hometowns where it is often more difficult to control the spread of the virus.

Global Times reporters went to Shaoxing in East China's Zhejiang Province, the first city to send a chartered train to the then epicenter of China's COVID-19 outbreak, Hubei Province, to speed up its work resumption in March, 2020, to see what policies and incentives the government departments and enterprises have introduced and how the local workforce has responded to the remain in place policy.

Just as Zhang Wenhong, China's leading infectious disease expert, said on Saturday that "we couldn't take it for granted that migrant workers should stay where they are for Spring Festival and not return to their hometown, they are making contribution and sacrifice by doing so," Global Times found that both the government and the six enterprises GT reporters visited gave workers the final say to make the decision while expressing their concerns of "both fists should be hard in epidemic control and smooth production resumption" during Spring Festival.

Cash for enterprises and employees

A 100,000 yuan ($15,400) bonus will be granted to the city's enterprises above designated scale whose industrial output in the first quarter of 2021 is no less than the average of that of the third quarter and fourth quarter of 2020, officials from bureau of Shaoxing human resources and social security told the Global Times, adding that all the state-owned scenic spots in the area will be open to stay put workers for free during the holidays, offering a "home away from home" feeling. 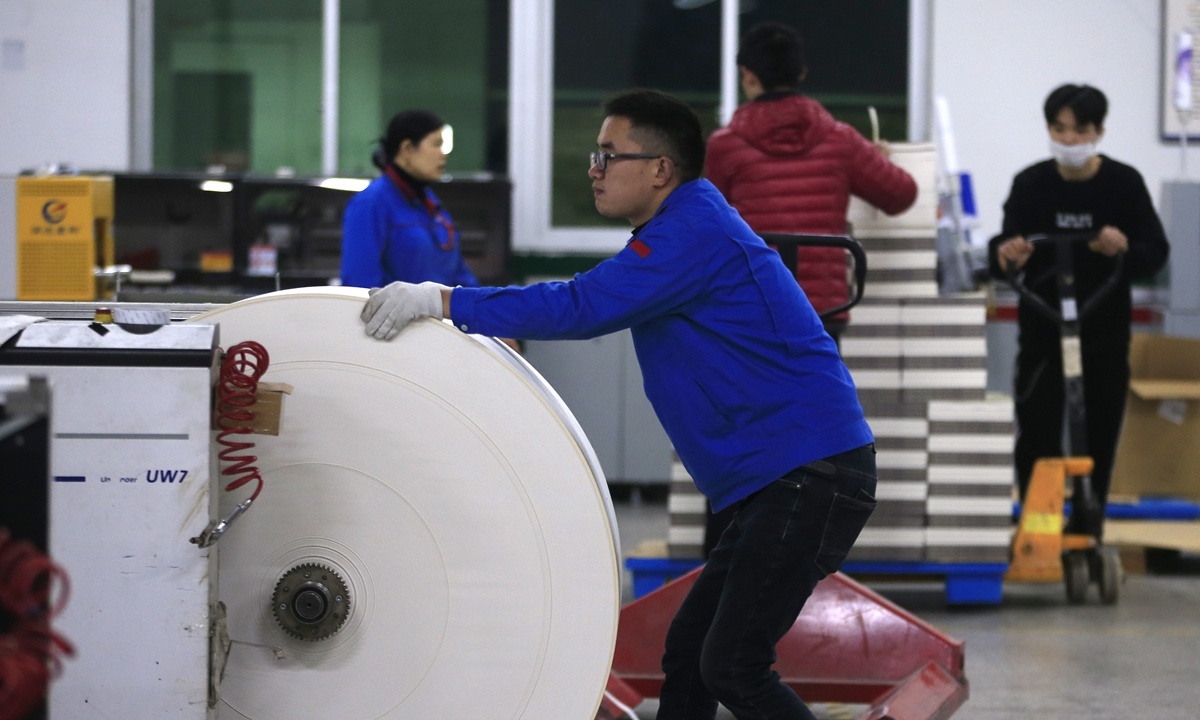 The six companies, Hucais Laser Materials Technology Co in traditional and digital printing industry, Zhende Medical Co, a global supplier for PPE, Environrem Environmental Remediation Technology, a startup micro firm, SY Science and Technology in cable industry, Libo Group in copper industry and Vie Group in auto industry, told the Global Times that before the government took the action, they had already begun to encourage workers to spend Spring Festival in Shaoxing since all of them had suffered "labor force shortages" in February and March in 2020. Cash bonuses ranging from 2,000 yuan to 5,000 yuan were offered to those prepared to stay at their posts.

Chen Fangfang, general manager of the Shaoxing plant under Zhende Medical, said that 600 non-local employees would stay, and will receive a bonus of 5,000 yuan.

"Because the factory has a lot of orders, our employees have voluntarily asked to continue working for several days during the holiday, so we'll give them holiday pay according to government regulations," Chen told the Global Times on Wednesday.

The GT reporters entered one of Zhende's mask workshops after rounds of strict disinfection and witnessed hundreds of masks were produced and packaged within a single minute.

Zhende has a daily production capacity of 16 million masks with employees working three-shift a day around the clock to meet huge demand all over the world. It realized a net profit of 2.1 billion yuan as of September 2020, a year on year increase 2100 percent. Its products have granted certificates by FDA in the US and CE by EU.

Zhang Xudong, the human resources director at Hucais Laser, told the Global Times that some staff, including manufacturing engineers, would continue to work over the Spring Festival holidays as it had a "significant" amount of orders placed since January. The company will give staff bonuses, including a 300-yuan subsidy per person each day, paid holiday and free dining. International brands Darlie, Estée Lauder, Versace, Burberry, Keep Walking and Hennessy are Hucais' are among their clients.

"Thanks to increased investment in technology innovation and research and development by the company, client losses overseas in Russia, South Korea and United Arab Emirates were hedged, we have a 25 percent sales revenue growth in 2020 despite the COVID-19 pandemic," Zhang told the Global Times.

"More than 62 percent of the around 600 employees in our company are from other provinces. Since sporadic domestic outbreaks were reported in parts of China and the production tasks of our company have been arranged till May and June based on contracts and orders, the management promoted the stay put policy as early as the beginning of December," Fang Hongmin, a trade union chairman from SY Science and Technology, told the Global Times.

"About 300 workers have decided to stay in Shaoxing as of the end of January, others are still taking a wait-and-see attitude as they have compelling reasons to go back home to look after the elderly or sick parent or children who have remained in their hometown, which is all understandable, so long as they obey prevention and control rules both here and in their hometown."

Environrem is devoted to the soil remediation and protection, right now the company has dispatched personnel in East China's Jiangxi and Southwest China's Sichuan provinces.

"For those colleagues, we encourage them to stay there for the holiday to reduce risk of contracting the virus, and to resume their project as early as possible in February," Jiang Kun, an agricultural field remediation expert in the company, told the Global Times.

Similarly, Vie Group not only has majority of staff based in Diankou, Zhuji city, currently it also has a team conducting function test of its products in Heihe in Northeast China's Heilongjiang Province.

"We are offering employees that remain at work both in Diankou and Heihe the same bonus and compensated paid holiday to make sure that they still can visit family members in hometown when the situation improves nationwide, 380 of the more than 700 non-local colleagues would stay here," Zhou Weiwei, an HR staff in Vie told the Global Times.

The businesses told the GT that production and operations remain unaffected in Shaoxing although outbreaks in other provinces may have interrupted the work flow for some companies.

Voices from those not returning home

All non-Zhejiang employees told the Global Times that they of course missed family members and their hometown traditions that make up the Spring Festival, but the collective spirit and the overall view of China's COVID-19 prevention and control efforts made them voluntarily choose to spend the most important holiday in Shaoxing, the city where they are now working.

"I used to return home for Chinese New Year every year, but people from Hubei suffered a lot last year because of the COVID-19, we have deeper feeling toward the spread of the virus. Although there is no outbreak in Hubei now, I'd follow the country's policy to stay in place, my parents understand and support me, too."

"I had been stuck in Wuhan for 76 days in 2020 as I planned to spend the Spring Festival in the new apartment we bought there. I became a volunteer to help buy food and medicine for the residents there. Our company promoted on the slogan that 'returning home is a risk, your wallet may be empty.' As we will be given an extra 2,000 yuan ($268) for staying here, I choose to be here although I miss my son a lot."

"Out of safety concerns both for myself and my family, I decide to stay in Shaoxing. Our company will offer free New Year Eve dinner package for us and colleagues may have small-scale dinner party to celebrate the holiday. The company will compensate us transport fee when we visit our family members when the virus is fully under control."