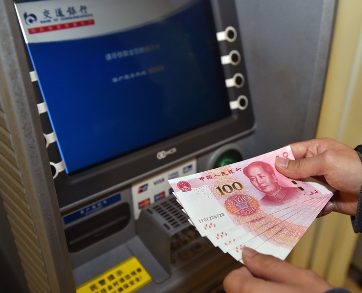 A resident withdraws new 100-yuan banknotes from ATM machine at the Beijing Branch of the Bank of Communication in Beijing, capital of China. (Photo: Xinhua)

The Chinese currency yuan (CNY) strengthened to its best week in more than a decade as of Friday. Investors and analysts believed the U.S. Federal Reserve's cautious stance on monetary tightening and market optimism about global trade boosted the yuan while depressing the U.S. dollar (USD).

Till the end of Friday's trading session, the yuan surged around 0.7 percent to roughly 6.74 yuan per U.S. dollar, recovering a considerable part of its steep losses since April 2018 while marking a vigorous start of the new year.

"The current appreciation in the CNY exchange rate came mainly as a result of the overall pressure on the USD index and the expectation for an easing of the China-U.S. trade dispute," said the foreign exchange desk on Treasury Department, Bank of China New York Branch, in an analysis.

China's economy has been undergoing structural reform with the introduction of various macro-economic policies. The bank believed that the yuan's strong buying momentum showed world financial markets have restored confidence in the Chinese currency.

"With the deepening of China's reform and opening-up, steady expansion of the domestic financial market, and the higher status of CNY in the international monetary system, it is expected that investors' willingness to hold CNY will increase further," said the bank's foreign exchange desk.

The resumption of trade talks between the United States and China is another booster of the market optimism and the rise of the yuan, it added.

Danske Bank, the largest bank in Denmark, believed that the significant depreciation pressure on the yuan is turning into a moderate strengthening trend.

"We see two main drivers behind the stronger CNY: (1) rising optimism about a trade deal with the United States and China; (2) an overall weakening of the USD on the back of more dovish speeches by Federal Reserve members that suggest it will be on hold for a while," it said in a note on Friday.

The Danish bank said market expectations for progress in China-U.S. trade talks and for the performance of Chinese economy in the second quarter this year will offer "more tailwinds ahead" to the yuan.

Bank of America Merrill Lynch predicted that the yuan would rally toward 6.65 yuan per U.S. dollar, given that possible progress in China-U.S. trade talks would result in "risk-on" emerging market sentiment, according to its weekly foreign exchange report released on Friday.

It also expected the U.S. dollar to weaken in 2019 over the waning U.S. fiscal stimulus, the ongoing U.S. government shutdown, and a cautious Fed that has become more dependent on economic data in policy-making.

The latest remarks of the Fed's chair and other officials continued to weigh heavily against the greenback, as investors built up their bets on fewer interest rate hikes in 2019.

Fed Chairman Jerome Powell stressed patience in the central bank's policy- making at a forum held at the Economic Club of Washington on Thursday, saying "we're waiting and watching," as inflation is "low and under control."

Bank of China said Powell's remarks strengthened the Fed's dovish attitude, which drove the U.S. dollar index to weaken overall. The index, which measures the greenback against six major peers, is a key metric of its value.

They were indications that the U.S. central bank would likely loosen its constraints on the money flowing in the market, which would consequently pare the greenback's comparative edge.

"Its next rate hike is expected to be postponed," Kevin Chen, chief economist of the U.S. wealth management firm Horizon Financial, told Xinhua on Friday.

Chen added that the value of the yuan has been on the rise as an emerging market currency, while global risky assets overall including equities have been rallying, which dampened the U.S. dollar's safe-haven demands.

Charles Evans, president of the Federal Reserve Bank of Chicago, said on Thursday that the Fed had "good capacity to wait" in terms of determining whether to raise interest rates or not.

The Fed officials' remarks were in line with the Federal Open Market Committee's (FOMC's) cautious stance on the Fed monetary policy, which was seen in its Dec. 18-19 policy meeting minutes released on Wednesday.

"The Committee could afford to be patient about further policy firming," said the FOMC, a Fed branch that determines U.S. interest rates and money supply growth.

Considering the status quo of the financial markets, the committee stressed that "a relatively limited amount of additional tightening likely would be appropriate."

Moreover, U.S. Consumer Price Index fell in December for the first time in nine months to the weakest reading since March last year, according to latest data released by the Labor Department on Friday.

The tepid data indicated mild inflation pressure, which would give Fed the leeway to mull their rate-hike decisions further later this year.

Chen noted that the U.S. dollar extended losses due to slowing U.S. economic growth, a move too to drive the yuan to appreciate. "Considering the current strong rebounds, downward risks for the yuan is expected to take a break now."

The foreign exchange desk of Bank of China noted that opportunities and challenges would coexist in the movement of the yuan exchange rate in 2019, which it said will be affected by multiple factors including the progress in China-U.S. trade talks, China's economic fundamentals and the situation of major international economies such as the United States and Europe.

"In general, investors expect that the financial market will show high volatility in 2019, and the market will play a greater role in the pricing mechanism of the yuan exchange rate," it said.