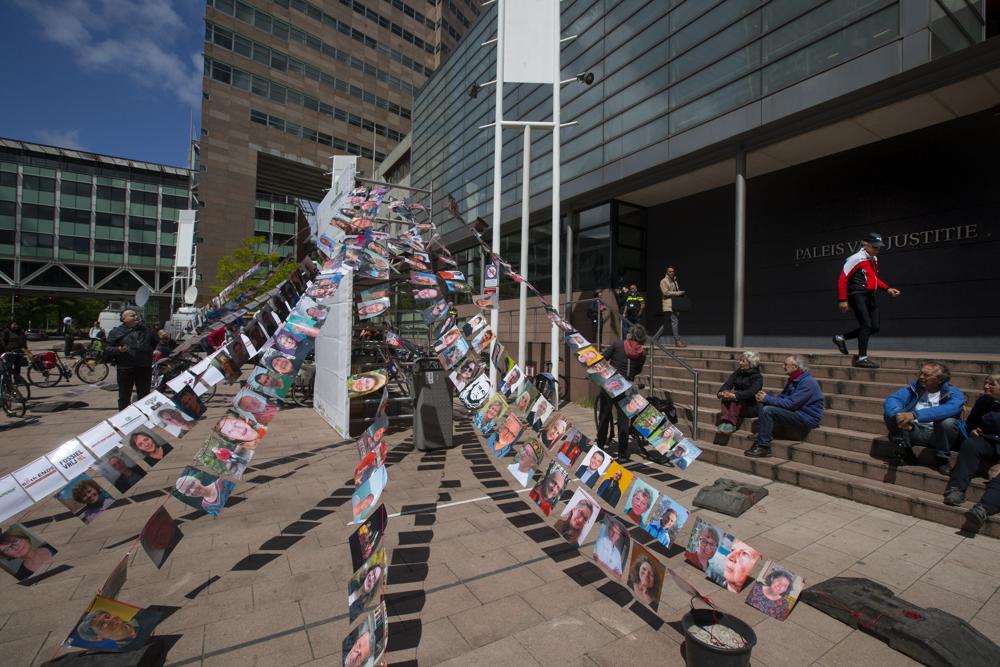 Pictures of plaintiffs fly outside the court where Milieudefensie, the Dutch arm of the Friends of the Earth environmental organization, took Shell to court, in The Hague, Netherlands, Wednesday, May 26, 2021. (Photo: AP)

A Dutch court ordered oil giant Shell on Wednesday to slash its greenhouse gas emissions in a landmark victory for climate activists that could have implications for energy firms worldwide.

Shell must reduce its carbon emissions by 45 percent by 2030 as it is contributing to the "dire" consequences of climate change, the court in The Hague ruled.

Environmental groups said the "historic" verdict was the first time that a company had been made to align its policy with the 2015 Paris climate accords.

Dubbed "the People versus Shell", the case was backed by seven environmental groups and more than 17,000 Dutch citizens.

Judge Larisa Alwin said in the verdict that Anglo-Dutch multinational Shell has an "enormous CO2 emission for which it is responsible".

Shell "is contributing to the dire consequences of climate change for the population", she said.

"Royal Dutch Shell has to implement this decision at once."

Shell said it expected to appeal the "disappointing" ruling.

"Urgent action is needed on climate change which is why we have accelerated our efforts to become a net-zero emissions energy company by 2050, in step with society," a Shell spokesman said in a statement.

'We are writing history'

Dozens of campaigners hugged, clapped and shouted "climate justice" outside the court as the verdict was announced, an AFP reporter said.

A group of around 50 Dutch cyclists had also cycled from the north of the Netherlands to mark the judgment.

"Today we are writing history, along with 17,000 co-plaintiffs," said the Netherlands branch of Friends of the Earth, which launched the case.

"It is the first time that a company has to align its policy with the Paris Climate Agreement. That is a mega breakthrough that will have worldwide consequences," it said in a statement.

The 2015 Paris accords committed all nations to cut carbon emissions to limit warming to two degrees Celsius (3.6 Fahrenheit) above pre-industrial levels and encouraged them to go down to 1.5 degrees.

Greenpeace Netherlands interim chief Andy Palmen said it was a "historic victory for the climate and everyone facing the consequences of the climate crisis."

"Shell cannot continue to violate human rights and put profit over people and the planet... We can hold multinational corporations worldwide accountable for the climate crisis," he said in a statement.

The case is one of a series around the world in which citizens and campaigners frustrated with inaction on climate change have hauled governments and big polluters before the courts.

Shell had argued that it is making serious efforts to cut gas emissions, but that there is no legal basis for the case and that governments are responsible for meeting Paris targets.

It said it was investing billions of dollars in low-carbon energy such as electric vehicle charging, hydrogen, renewables and biofuels.

The judge acknowledged that "Shell has already tightened up its goals, but the policy is not concrete and is full of reservations."

Saying that the emissions of Shell, its suppliers and customers were "greater than those of many countries", the judge said the resulting climate change effects pose "serious risks to human rights, such as the right to life and an undisturbed family life."

She ordered Shell to make the emissions cut based on its 2019 levels.

Dozens of climate marchers handed in the lawsuit to Shell's headquarters in the Netherlands in The Hague in April 2019 in what organisers said was the first case of its kind.

Campaigners have repeated the success of a case brought by the green group Urgenda in which the Dutch Supreme Court in 2019 ordered the state to slash emissions by at least 25 percent of 1990 levels by the end of 2020.

The Netherlands, particularly vulnerable to climate change as a third of the country is below sea level, has pledged to reduce CO2 emissions by 49 percent by 2030.