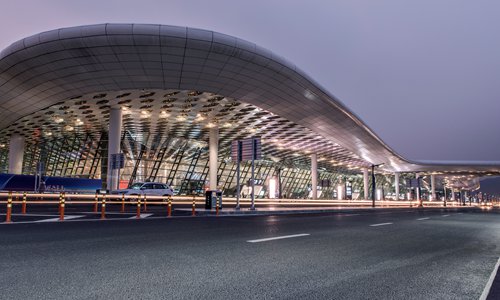 The Shenzhen airport in South China's Guangdong Province on Sunday reported significant rises in both passenger and cargo traffic, presenting a stark contrast to the airport in the neighboring Hong Kong Special Administrative Region (HKSAR), where normal operations have been hit hard by persistent political unrest for more than three months.

The disparity in performance between the two airports, which are just 37 kilometers apart, offers the latest evidence of the cost of the chaos and violence on the HKSAR's economic prospects and its global image.

The airport said earlier that it aims to build itself into an international aviation hub targeting the Asia-Pacific and global markets amid the opportunities brought by the Guangdong-Hong Kong-Macao Greater Bay Area development.

In comparison, Hong Kong International Airport (HKIA) said it handled 6 million passengers in August, down 12.4 percent from the same period last year and the biggest drop since 2009 in the wake of the global financial crisis.

The airport said that the drop in passenger volume was mainly due to a decrease in visitor traffic as the passenger traffic to and from the Chinese mainland, Southeast Asia and China's Taiwan had significant declines compared to August 2018.

Cargo throughput dropped 11.5 percent year-on-year to 382,000 tons in August. Transshipments fell 19 percent and imports were down 15 percent year-on-year. The airport said that the figures for Southeast Asia and the Chinese mainland decreased the most among key trading regions.

"The figures in comparison have showed the riots are really hurting the travelers and cargo business in Hong Kong. If Hong Kong cannot make the social environment stable, the declines may continue to get worse," Guo Ning, an industry analyst, told the Global Times Sunday.

Cathay Pacific and Cathay Dragon, two airlines under the group, carried a total of 2.9 million passengers last month, a drop of 11.3 percent from the same period last year. The two airlines carried 161,394 tons of cargo and mail, a drop of 14 percent compared with the same month last year.