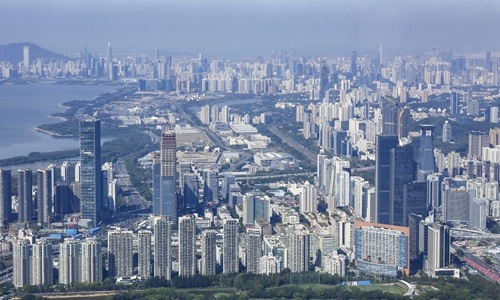 Shenzhen-related shares rallied on China's capital market on Monday morning as investors reacted to a detailed plan released by China's central authorities on Sunday that aims to build the city into a socialist demonstration area in the next five years.

Shares of Shenzhen-based photovoltaic product maker Jiawei soared by the daily limit of 20 percent as of morning session's close, while Shenzhen Institute of Building Research shares also gained by 20 percent.

China's central government released detailed measures on Sunday aiming to further advance the city's opening up and build it into a pilot "demonstration area of socialism with Chinese characteristics", according to the document jointly issued by the general offices of the Communist Party of China Central Committee and the State Council on Sunday.

The measures include further opening-up the capital market and shipping sectors, setting up a special negative list for the city and further opening up in sectors including energy, telecoms, public utilities, transport and education.

The new policies were released as locals are celebrating the 40th anniversary of the establishment of the Shenzhen Special Economic Zone (SEZ).

A celebration will be held to mark the 40th anniversary of the establishment of the Shenzhen SEZ in Shenzhen on Wednesday morning. Chinese President Xi Jinping will attend the event and deliver a speech, the Xinhua News Agency reported.