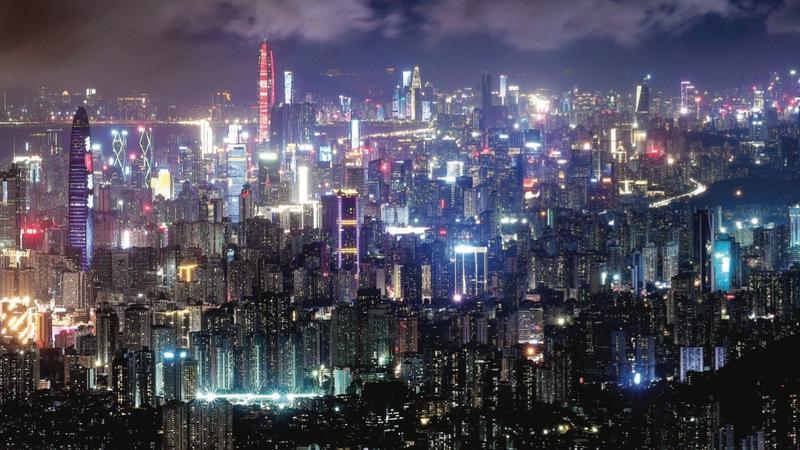 This photo shows a view of Shenzhen at night on Sept 16, 2020. The special economic zone serves as a model of China's economic growth. (Photo: Xinhua)

Over a month after Shenzhen became the first city on the Chinese mainland to institute a reference price list for second-hand homes, the effects of the new housing policy are being felt.

According to the Shenzhen Real Estate Intermediary Association, the southern city's second-hand home market has cooled down sharply after the latest measure was imposed on Feb 8 — four days before the start of the Spring Festival holiday. Transactions plunged to 362 units from Feb 15 to 21 — an over 80 percent drop compared to the weekly average of 2,500 units in the weeks before the policy was launched. Transactions bounced back to 991 units from March 1 to 7, which are still much lower than the previous level.

Real estate agents in Shenzhen's downtown Futian district said there had been no property transactions in recent days as buyers and sellers sit on the fence.

"Homeowners refuse to unload their properties in accordance with the government's reference prices, which are lower than those in the market. Some have put off selling their properties, while buyers are also conservative as they're unclear what the future market trend will be," said an agent at Shenzhen Centaline Property.

The Shenzhen Housing and Construction Bureau issued the reference price list on Feb 8 for second-hand homes in 3,595 residential communities in response to the city's runaway property market, with average prices for such homes having risen to 66,000 yuan ($10,150) per square meter last year — up 10 percent year-on-year — according to Leyoujia Research Center.

The trend hasn't stopped. The National Bureau of Statistics said prices for Shenzhen's second-hand homes rose by 15.3 percent in January, compared to the same month a year ago.

The Shenzhen authorities said the latest measure is aimed at guiding real estate agencies in issuing reasonable prices and helping banks to check loan risks through a higher level of information transparency.

A day after the new policy came into effect, real estate agencies moved all price listings from their offices and apps.

Wang Feng, director of the Shenzhen Real Estate and Urban Construction Development Research Center, said reference prices for about 62 percent of the 3,595 residential communities were based on their transaction prices last year.

But in about 27 percent of the communities, mostly in the popular districts of Futian, Nanshan and Bao'an, the listed prices were still too high and there's a need to "squeeze the bubble", Wang said. The remaining 10 percent were given reference prices based on market evaluation due to the lack of transaction information.

Analysts warned that homebuyers might now have to make higher down payments if bank loans are based on the official reference prices.

Ping An Bank and the Bank of Communications went further, saying the reference prices will be the criteria for issuing loans.

Li Yujia, chief researcher at the Guangdong Housing Policy Research Center, believes the transaction volume of Shenzhen's second-hand apartments will shrink in the coming months and prices will stay flat as the new policy has a cooling effect on the market.

But Li disagreed that Shenzhen's spiraling home prices are caused by the imbalance between supply and demand, arguing that the fundamental issue is the problem of leveraging. Only when financial regulators, banks and relevant parties join hands to control financing can the city's housing prices be checked, he said.

Although the new housing policy is aimed at curbing speculation, some eager homebuyers said they've been hurt.

"Few homeowners will sell their assets based on the government's reference prices. The result is that buyers now have to make heavier down payments," said Yang Kunxian, a 32-year-old insurance worker, who has been looking for a second-hand home for several months.

"My wife and I have saved just enough money to buy a 60-square-meter flat in Futian. We may now have to save up more money and buy later."