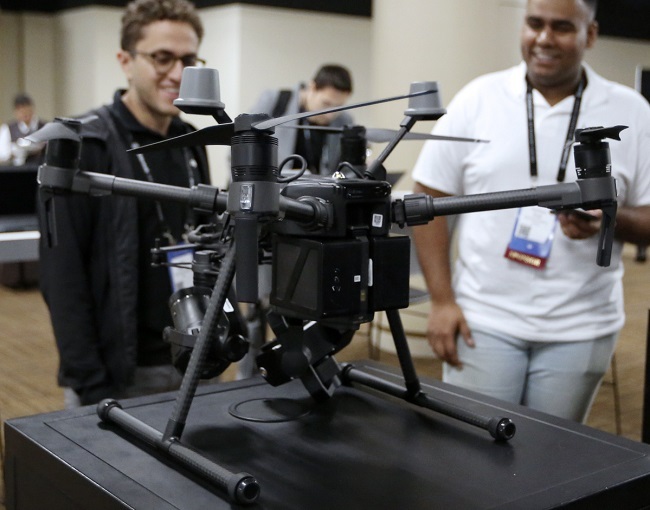 Visitors check out a drone during a high-tech exhibition held by Shenzhen-based drone maker DJI in Los Angeles in September. [Photo/Xinhua]

The overseas direct investment by Shenzhen, Guangdong province, ranked second among mainland cities in the first half of this year, and the contract value for foreign contracted projects is ranked at the top, with investment in Belt and Road Initiative-related economies serving as a main driving force.

The Commerce Bureau of Shenzhen Municipality said that between January and June, Shenzhen's ODI reached $4.7 billion, up 50.59 percent on a yearly basis, and its newly signed contract value for foreign contracted projects was worth $9.9 billion.

The Commerce Bureau of Shenzhen Municipality said that between January and June, there were 45 newly added enterprises and institutions in BRI-related economies that Shenzhen enterprises invested in, growing 28.57 percent on a yearly basis. Contracted investment in the regions by Shenzhen enterprises surged by 432.54 percent year-on-year to $705 million.

"Shenzhen's ODI continued to post steady growth, and the construction of the BRI laid solid foundation for the country's 'going global' strategy," said Wang Youming, director of the Commerce Bureau of Shenzhen Municipality.

A batch of major projects overseas were implemented in an orderly manner, having an increasing demonstration effect, Wang said.

According to CMPort, it has been actively implementing BRI in recent years. By the end of 2019, its business involved 50 ports in 26 countries and regions related to the initiative. In 2019, its container terminal throughput reached 112.9 million metric tons, and its bulk cargo throughput was 490 million tons.

It has invested in Sri Lanka, the Republic of Djibouti, Brazil, France, Nigeria, Togo, Australia and Turkey, taking advantage of the BRI to expand its investment layout overseas.

Zhang Lei, an attorney at Zhong Yin (Shenzhen) Law firm and a former professor at Hebei Finance University, said that Shenzhen enterprises' investment into BRI-related regions breaks through the domestic market, which has excess domestic production capacity, rising costs and fierce competition, and moves toward the overseas markets which contain numerous opportunities.

"With the help of the initiative, Shenzhen enterprises can make full play of the advantages in local labor force, land, tax and business policies, to lower production costs. It also benefits the firms' exports to the European countries and the Americas," he said.

In addition, Shenzhen enterprises that invested in the BRI-related economies can take advantage of the governmental platforms to raise their domestic popularity, building brand image, he added.

The foreign cooperation department of the Commerce Bureau of Shenzhen Municipality said that BRI-related economies are mainly developing countries, which have large demand for capital, and have broad market potential. Investing in these countries is beneficial for enterprises to obtain a higher rate of return and enhance the economic vitality of Shenzhen enterprises.

Meanwhile, BRI-related economies have rich production factors with relatively low costs. This helps Shenzhen's enterprises with relative competitiveness, such as energy enterprises and communication enterprises, go global and boosts the city's transition and upgrade, it said.

As promising as the future is, Zhang noted that risks should be noticed when Shenzhen enterprises invest in BRI-related economies, and multinational corporates with good reputations should be taken priority.

In addition, the return of funds is important. Invisible investment risks still remain. It is easy to invest money into a project, but once the project is put into operation, invisible costs go up. For example, the increasing frequency of work strikes may increase the actual operation costs for enterprises, he added.