Shoemakers mull moving production back to China amid Vietnam outbreak 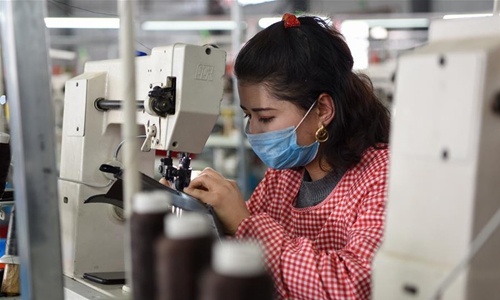 A worker makes shoes at a workshop in Yecheng County of Kashgar, northwest China's Xinjiang Uygur Autonomous Region, March 19, 2020. In a relocated area of Aktax farm, people have started production as the weather warms up. (Photo: Xinhua)

Major shoemakers are looking to diversify some of their supply chains back to China as an emergency measure amid production suspension at major plants in Vietnam due to the raging coronavirus.

Amid the continuous spread of COVID-19 in Vietnam, which led to the shutdowns of 19 cities and operation suspensions at some major ports, international manufacturers face another round of hurdles to production that have put their goods deliveries in peril, media reports said.

An employee with a large Taiwan-based shoemaker told the Global Times on condition of anonymity that its plants in Vietnam had stopped production due to the pandemic, even if orders have piled up.

"We have slowed the process of taking new orders, while looking at other sources of supplies including from plants in the Chinese mainland, to help meet some demands," said the person.

Another large footwear manufacturer Pou Chen is facing the same predicament. It has temporarily suspended production in Vietnam. This left it unable to live up to orders.

The effective control of the coronavirus in the Chinese mainland has guaranteed smooth production, which has led to the backflow of manufacturing, especially labor-intensive processes, coming back to China, industry insiders said.

"There are rising cases of companies moving their supply chains back to China due to the breakouts in Southeast Asian countries, including Vietnam," a source with a local shoe industry association in South China's Guangdong Province told the Global Times on Monday, noting that many local factories in Guangdong received more orders directly from foreign clients in recent months, another indication of order backflows.

"The plants in the mainland are highly automated, which means limited manual labor being involved in the production process. Therefore, production has been smooth," the source said.

As the pandemic has intensified in Vietnam since April, other large international manufacturers including Samsung, one of the largest employers of local workers, has had its smartphone manufacturing disrupted, leaving its plant near Ho Chi Minh City running at only half capacity, media reports said.

Other companies such as Apple's major supplier Foxconn also faced production difficulty when some of its subsidiaries suspended operations in response to the local government's viris prevention measures in May.

Industry insiders feared that the coronavirus flare-up in Vietnam would give the global supply chain a heavy blow that may go beyond the production line and hit logistics if the outbreak is not contained shortly.

The outbreak in Vietnam has led to severe port congestion, with storage yards nearing saturation, and the Port of Cat Lai and the Port of Vietnam's New Port of Gai Mei International Terminal notified shippers they would suspend the import and export containers, sofreight.com, an industry information platform, said on Monday.

"In addition to the backflow of orders, Chinese ports may take more shipments amid the fallout of the operation disruption at Vietnamese ports," an industry insider said.