Signs of stress in global markets 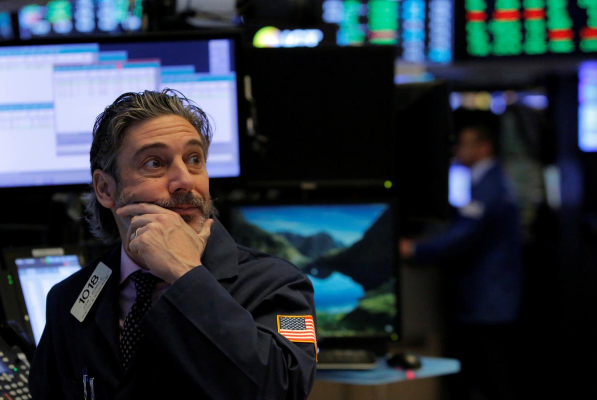 Financial markets have been shaken this quarter by a raft of worries: the prospect of a global trade war, turmoil in the Trump Administration, signals by central banks of a shift towards monetary tightening and tensions between world powers.

These factors have weighed on sentiment following a burst of market volatility in February that wiped trillions of dollars from world stocks from which investors are yet to recover fully.

Here are 10 charts to watch for warning signs of increasing market turmoil, stress in the banking system and investor flight to safety:

The gap between 10-year US10YT=RR and 2-year US Treasury yields US2YT=RR. A ‘flattening’ curve is often considered a portent of slowing economic activity, an ‘inverted’ curve has been a reliable predictor of recession. The curve hit its flattest in a decade in January and has flattened further in recent days on demand for safe-haven, long-dated Treasuries.

The benchmark measure of U.S. stock market volatility, sometimes referred to as Wall Street’s “fear gauge”. Having posted its biggest one-day spike ever on February 5, the VIX .VIX has since come down but investors don’t see it revisiting the record lows of only a few months ago.

The gap between short-term U.S. interbank lending rates USD3MFSR= and overnight money market rates USD3MOIS=, reflecting perceived stress in the banking system and the corporate world. The gap widened to 52 basis points this week, a level not seen since January 2012. At the end of 2017, it was 27 basis points.

An index of credit default swaps in the European financial sector, the cost of insuring against default on “junior” bank debt and effectively a measure of counterparty risk and stress in the banking system.

Bank of America Merrill Lynch’s global index of high-yield bonds .MERHW00, reflecting credit risk in the so-called “junk” market, a sector that will attract huge inflows of cash in good times but often one of the first sectors investors will flee from in bad.