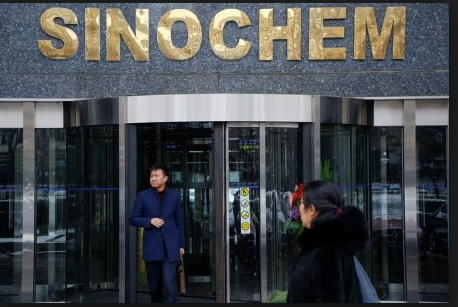 China’s Sinochem Group has tapped three banks, including Morgan Stanley, to work on the possible Hong Kong listing of its key oil assets, as it seeks to raise capital and revive the company, said four people with knowledge of the matter.

Citic Securities and BOC International are also advising China’s fourth-largest oil company on the planned initial public offering, which will likely take place in the second half of next year, the people said.

No formal mandate for the IPO has been awarded yet, they said, adding preparations for the market float are at an early stage, and unlisted Sinochem has yet to decide the size of the public offering.

“Our people are preparing for it (IPO) ... but it’s still far away,” Sinochem Chairman Ning Gaoning told Reuters on the sidelines of the Communist Party Congress.

The planned listing will likely include Sinochem’s refining, fuel marketing, trading and storing assets, but not its struggling upstream business - mostly overseas oil and gas production - three of the people said.

“These assets are considered the best under the company,” said one person who was briefed by Sinochem management, referring to the businesses likely to be part of the listing.

“Sinochem is looking to offload its upstream business to the government rather than to investors.”

All the people declined to be named as details of the listing process are not yet public. Sinochem did not respond to a request for comment. Morgan Stanley, Citic and BOCI declined to comment.

Hit by low oil prices, Sinochem has aimed to shift from oil exploration and production to the more value-added refining and retailing businesses. It has been looking to sell a stake in Brazil’s Peregrino offshore oilfield.

Beijing has been working towards creating bigger, stronger state firms, and building enterprises capable of competing globally. It is also weeding out excessive capacity in bloated sectors, but wants to avoid any risk of mass layoffs or a blow to economic growth.

China will prevent the loss of state assets, deepen reforms of state firms and develop a mixed-ownership economy, President Xi Jinping said at the opening of the twice-a-decade congress on Wednesday.

Sinochem’s IPO plans have been pushed ahead by Ning, who joined the firm last year from food group COFCO, where he was well known for aggressive restructuring and M&A, said two of the people.

Under his leadership, several Sinochem units have been given more leeway in their expansion plans and more support for tapping capital markets for fundraising, said another person.

Beijing-based Sinochem controls the 240,000 barrel-per-day Quanzhou refinery in the coastal province of Fujian, a major source of group profits in the past two years. Sinochem has said it wants to boost investment at the refinery to diversify into petrochemicals.

It also runs nearly 10 crude and oil products terminals, and more than 700 retail stations across China, its website showed.

The group’s annual turnover of crude and products is about 150 million tons, while the combined annual capacity of its three refineries is nearly 25 million tons.

In 2011, Sinochem Corp, in which Sinochem Group holds a 98 percent stake, planned to raise up to $5.3 billion via a Shanghai IPO, and use the proceeds to fund the Quanzhou refinery. The plan was dropped due to unfavorable market conditions.