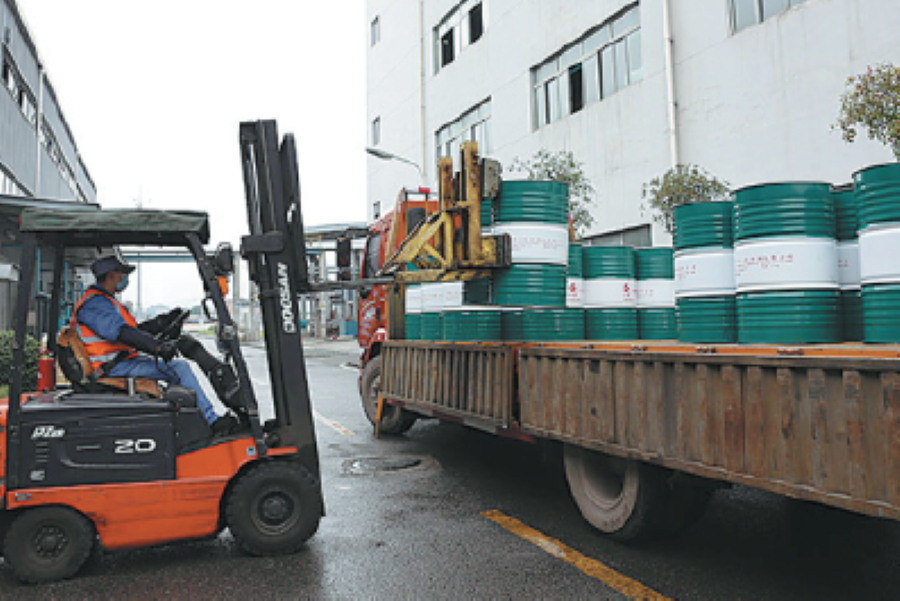 An employee loads wares onto a truck at a Sinopec Lubricant production facility in Chongqing in February. (Photo: China Daily)

At a time when most enterprises are struggling amid the coronavirus pandemic, Sinopec Lubricant Co－a high-end production arm under central State-owned Sinopec (China Petroleum & Chemical Corporation)－reported a 50 percent year-on-year growth in overall sales in April, with profit rocketing 70 percent.

In fact, despite the impact of COVID-19, the company's output and sales volume in March had already recovered to average levels seen in previous years thanks to concerted efforts in reducing costs and improving efficiency.

Monthly orders for products such as marine oil, heat conduction oil and synthetic grease were even overbooked, said Sinopec Lubricant.

On March 16, the company's branch in Wuhan, Hubei province, fully resumed operations, joining the first batch of enterprises doing so in the city's Jiang'an district.

In addition, by March-end, all subsidiaries under Sinopec had resumed operation, according to the company.

Thanks to months of efforts by the entire nation to contain the outbreak, Sinopec and its units are now able to "resume work in an orderly manner", Sinopec Lubricant said, and this allows it to work round the clock to further boost production capacity and cut costs to guarantee the country's essential material supplies in the fight against the pandemic.

To better serve its parent firm's broader efforts of helping companies and individuals across nation get back to work, in March, Sinopec Lubricant teamed up with its parent firm's Guangdong province unit to launch promotional sales to help car owners with vehicle maintenance.

The company also provided zero-contact delivery to lower the risk of cross infection. Customers can place orders through online platforms to receive lubricant products at home.

For medical professionals who previously went to Hubei to fight the contagion, there are also gifts. Sinopec Lubricant launched a public welfare drive in late March to offer free engine oil to doctors and nurses nationwide that had devoted their efforts in Hubei.

Considering that some of the medical workers have been in Hubei for more than a month or two, and that when they returned home their cars may need maintenance, the company decided to offer what it has to express its appreciation and encouragement for these "angels in white", said an official from Sinopec Lubricant.

The company said that between March 20 and April 30 it offered free engine oil to a total of 10,884 assisting medical professionals.

Although the pandemic situation in China is abating, medical supplies used in contagion prevention and control are still a must. On April 28, Sinopec Yizheng Chemical Fibre Co Ltd, a Jiangsu province-based subsidiary of Sinopec, announced that the eighth of its 500-metric-ton-level meltblown nonwoven fabric production line was successfully put into operation. 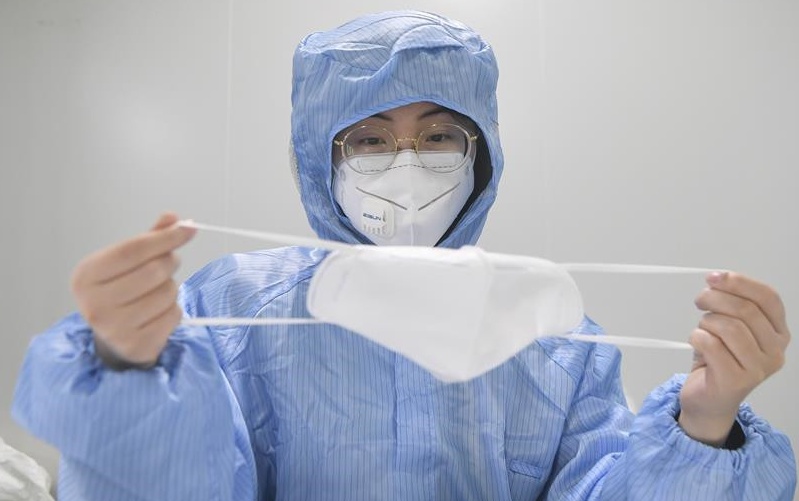 The conglomerate, one of the three largest oil and gas companies in China as well as a leading supplier of medical raw materials, earlier responded by turning itself into a leading company for meltblown nonwoven fabrics, the essential raw material used in surgical masks, in a bid to fill the supply gap.

Wu Gangliang, a researcher at the China Enterprise Reform and Development Society, said that Sinopec, as a representative of central State-owned enterprises, has been playing an important role in the country's fight against the contagion. Its large asset scale, advanced production technologies and abundant resources enable it to undertake rapid production shifts.

"In addition, the conglomerate's Party Leadership Group, as a standing body of SOEs, functions as a command department during special times. When the contagion broke out, SOEs' Party committees could directly implement the country's 'wartime mission', quickly relocating resources and production capacity to shift to medical material production, so as to guarantee supplies," Wu said.

Sun Wenhua, director of the committee of experts of the agricultural chamber of commerce under the All-China Federation of Industry and Commerce, said that when the pandemic is over, China's energy SOEs should think of innovative modes of development, such as the exploration of new energy, to give full play to its resource advantages in the long run.