BUSINESS Six days at the CIIE with one British exhibitor

Six days at the CIIE with one British exhibitor

A tall and slim British gentleman wearing a neatly pressed suit was present every day at the just-concluded first China International Import Expo (CIIE). With a smiling face as well as a keen eye for business, he benefited a lot at the expo. 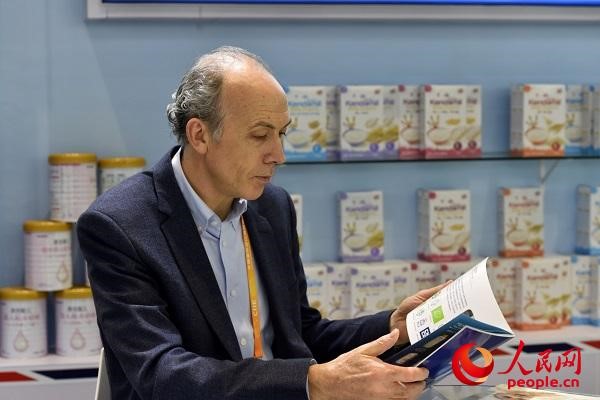 The grey-haired man is Ross McMahon, CEO of UK infant and baby formula company Kendal Nutricare. During the 6-day CIIE, McMahon came to his exhibition booth every day, looking for cooperative partnerships and business opportunities.

Day One: “President Xi Jinping’s speech injects confidence into us”

China is earnest to build an open global economy, McMahon said after listening to Chinese President Xi Jinping delivered a keynote speech at the opening ceremony of the CIIE on Nov. 5. 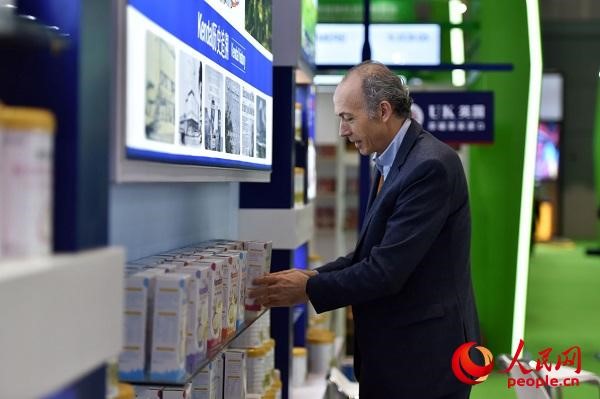 McMahon found president Xi’s words very persuasive, which made him more confident about the Chinese market. “I always believe that my assessment of the Chinese market a few years ago is right. China has not only a big market, but also a good business environment,” he noted.

The businessman acquired Kendal Nutricare in 2015 and founded the milk powder brand Kendamil. China is a major overseas market for his company, McMahon said, adding that the company’s business was prosperous over the past three years, proving that he had made a wise decision.

Day Two: Walk around the exhibition area to learn more about competitors

The CIIE is the world’s first import-themed expo. It has attracted 172 countries, regions and international organizations, as well as 3,600 enterprises to showcase their products and services. 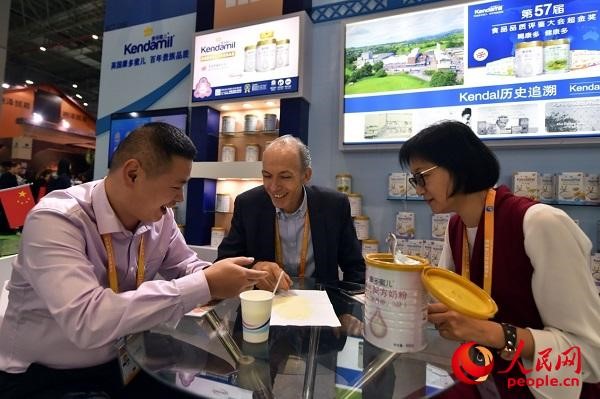 “The exhibition area is so big!” said McMahon. In the two exhibition halls of food and agricultural products, there were a lot of dairy companies, providing him with a great opportunity to learn about his competitors.

Last year, there were about 17 million newborns in China. As the Chinese government encourages couples to have a second child, there will be greater market potential, McMahon said.Therefore, major global dairy brands all attach great importance to the Chinese market, which brought fiercer competition that must be dealt with seriously.

Day Three: Sign agreements with two cans of milk formula in his hands

Nov. 7 was a big day for McMahon. On the day, Kendal Nutricare signed a Memorandum of Understanding with Orient International Shanghai Foreign Trade. John Edwards, the British Consul General in Shanghai, witnessed the signing. 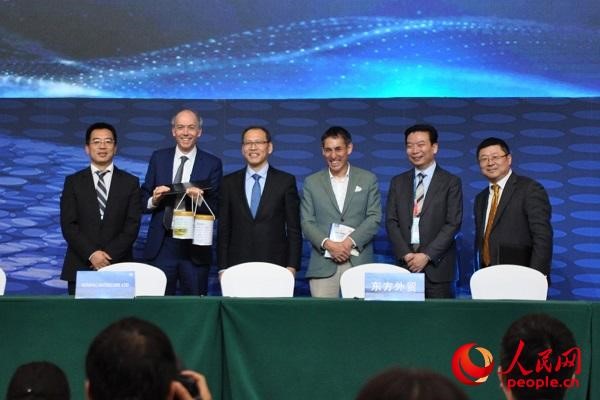 McMahon signs the agreement with two cans of milk formula in his hands. The scene was applauded by the audiences.  (Photo: Zeng Shurou/People's Daily Online)

The audiences burst into laughter as McMahon carried two cans of milk powder at the agreement signing ceremony. But seconds later they applauded him.

This isn’t McMahon’s first time to China. Earlier this year, he became viral online when he visitedChina as a member of a delegation with British Prime Minister Theresa May, getting off the planewith two cansof formula powder in hand.

The MOU will last for ten years and worth a minimum of £350 million tothe British company. “It’s very exciting because it’s a big commitment by Orient International to work in long term with us. It gives both companies a reason to invest and make long-term plans,” the British businessman said.

McMahon likes to visit other exhibition areas when he is not busy.

He, who frequently attends expos around the world, in places such as Germany and France, as well as Southeast Asia and the Middle East, adds that the CIIE has been very well organized though the number of participants is large. 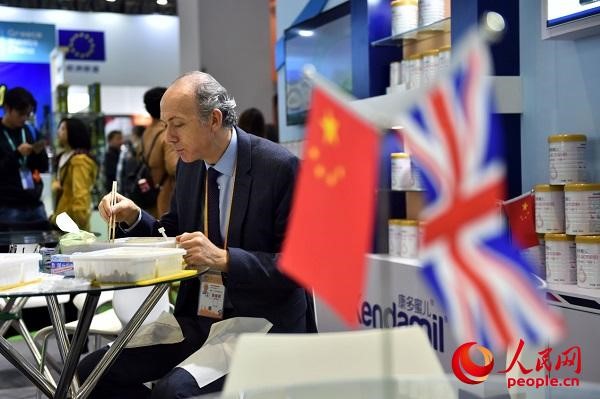 McMahon has lunch at the Kendamil booth. Not only supporting facilities, the dining services at the CIIE are also convenient. (Photo: Weng Qiyu/People's Daily Online)

The organizing of the CIIE is first-class, and the infrastructure and supporting facilities satisfy the needs of different people, McMahon said, adding that it is great that the volunteers are always ready to help him when needed.

On Nov. 9, the CIIE was opened for social organizations. To know about Chinese consumers’ opinions on his milk powder, McMahon offered milk samples to visitors and listened to their suggestions.

“Shanghai is a very international city. The consumers have a broad vision, and they can provide me with a lot of useful advice,” McMahon said. 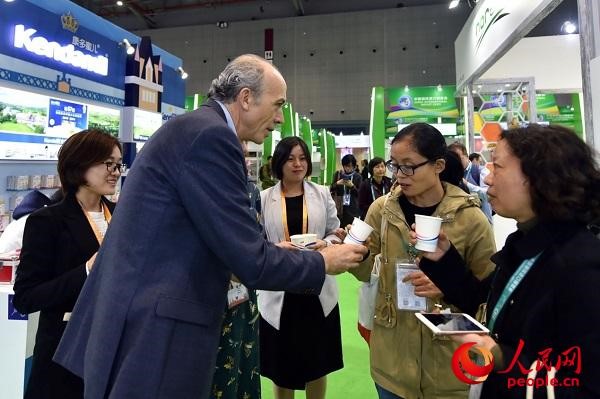 By opening up, China is not only changing the world, but also benefiting itself, said McMahon, who witnessed the drastic changes in China over the past 20 years after his visit to the country.

The British businessman said he witnessed China’s change from the "kingdom of bicycles" to the "kingdom of automobiles". He owns a mobile phone and a watch made by Huawei, and a Lenovo laptop, as well as many other Chinese electronic products, because of the trustworthy quality. “As a businessman and a consumer, I will buy more Chinese products.”

As the CIIE was about to conclude, McMahon started to pack up for a new business trip. “I had an amazing experience here. I met my partners, and showcased the image and quality of my products to the world,” he said.

The British government lays high importance on developing economic and trade relations with China, McMahon noted, adding that his company, as one of the best foreign trade companies in the UK, will definitely come to the CIIE next year.

The businessman said next year he will enlarge the exhibition area, and invite his friends in the UK and throughout the world to come to display their products at the CIIE. “Everyone should know that this year is just the beginning! See you next year, CIIE!”