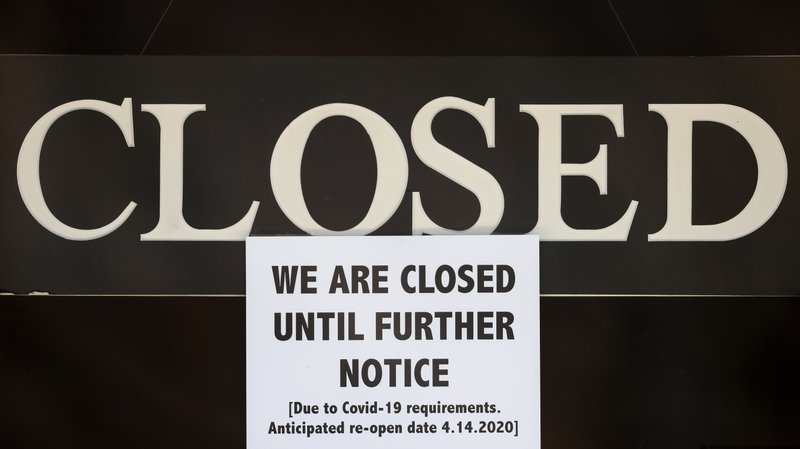 In this April 2, 2020 file photo, a notice of closure is posted at The Great Frame Up in Grosse Pointe Woods, Mich. The government is closing in on the $349 billion lending limit on its Paycheck Protection Program that is sending relief money to the nation’s small businesses. (Photo: AP)

The US government’s lending program for small businesses is on hold.

The Small Business Administration said Thursday that it reached the $349 billion lending limit for the program, after approving nearly 1.7 million loans.

Thousands of small business owners whose loans have not yet been processed must now wait for Congress to approve a Trump administration request for another $250 billion for the program. Lawmakers have been haggling over whether to extend the program as it stands now, or whether to add provisions that, among other things, would help minority businesses. It’s unclear when they might reach an agreement that would allow loan approvals to continue.

Business owners left in limbo were getting more anxious after hearing the program was on hold.

“Ugh. I’m starting to stress a bit,” said Greg Corey, who applied when the program launched April 3. He last heard from his bank on Saturday. Corey, owner of Porchlight, an Atlanta-based advertising and marketing firm, has been cutting expenses and work for freelancers so he can keep paying his staff of 10.

Treasury Secretary Steven Mnuchin and SBA head Jovita Carranza on Wednesday urged Congress to approve more funds. Meanwhile, thousands of businesses are still applying, hoping to get loans when Congress approves an extension of the program.

The fight in Congress over the extension is along party lines. Republicans are amping up the political pressure in hopes of getting a relatively narrowly-drawn infusion of $250 billion in funding into the program, but top Democrats are seeking to add funding for hospitals and state and local governments.

Action on Capitol Hill is complicated by the shuttering of the Capitol other than for pro forma sessions that require unanimous agreement in order for any legislation to advance. The sums are unlike anything that has passed under conditions requiring such unanimous consent — a wholly unprecedented situation that has scrambled the power dynamics inside the Capitol.

Democrats like House Speaker Nancy Pelosi of California are also seeking to add provisions that among other things would help minority businesses.

A Senate session Thursday afternoon likely won’t produce any progress, which means the business payroll subsidy program won’t get funding until next week at the earliest.

The most likely outcome if there is to be a successful result could be a relatively narrowly-drawn bill involving additional funding for hospitals and maybe testing.