As New York becomes the epicenter of the coronavirus outbreak in the United States, even die-hard businesses are shutting down in the so-called "city that never sleeps." 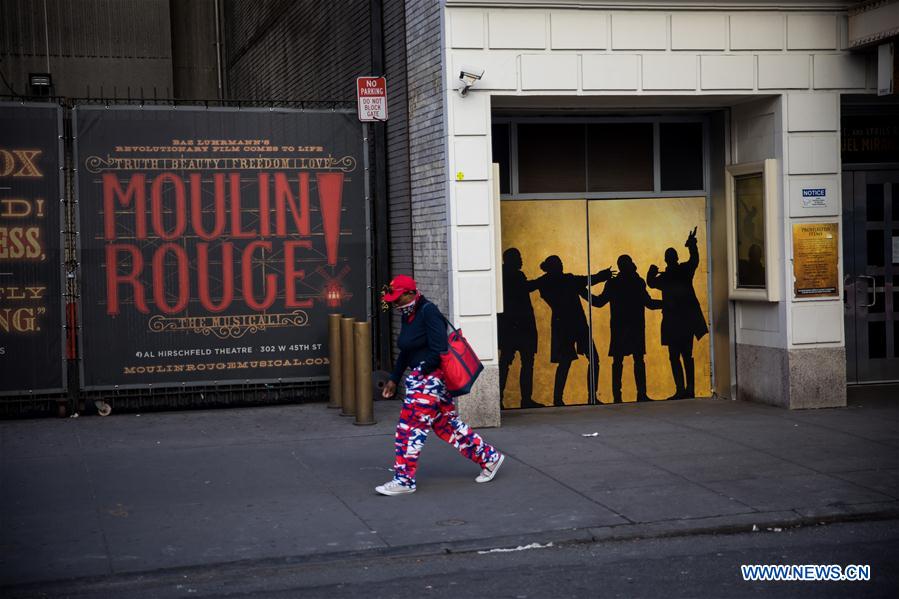 A pedestrian walks past a closed theatre in New York, the United States, March 15, 2020. (Photo: Xinhua)

The losses add to the economic toll from the crisis in the US, which is fighting the largest coronavirus outbreak anywhere, causing a record spike in unemployment claims and posing special risks for small businesses.

Biscuits & Bath, a dog daycare and boarding company, announced Friday that it will temporarily shut down and lay off most of its remaining employees.

"We believe this is the best and only way to keep everyone safe," Biscuits & Bath owner Scott Smith said in a letter to clients.

Gaetano Arnone, executive chef at Otto Enoteca, briefly revamped the restaurant into a delivery-only operation before pulling the plug.

"Last night we did $400," Arnone said by telephone Friday. "It's just not enough to keep everyone employed and safe."

The two companies are emblematic of the small and medium-sized businesses that are considered most at risk as officials in New York City and other jurisdictions shutter economic activity in an effort to try to limit the deadly contagion.

Too late for relief?

But non-public companies are viewed as an especially vulnerable node in the American economy because they typically lack the access to capital of bigger outfits.

The $2 trillion relief bill signed into law Friday boosts unemployment compensation and provides $350 billion in forgivable loans to cover small business payroll and overhead, including the rehiring of laid-off workers.

Officials from the Trump administration have said the money will be available immediately, but experts are skeptical that banks have enough staff to process the loans quickly, or that the Small Business Administration will be able to ramp up fast enough in a country of 330 million people.

"Until we have some sense of when the virus will be contained, there will be too much disruption for small businesses to really get back on their feet and operate normally."

In New York, the coronavirus hit to the economy has been like a boulder that gets bigger as it rolls ever-faster downhill, leveling more of the city's stores and services.

It had been categorized by New York State as an "essential business" because it was caring for dogs of hospital workers and first responders, as well as coronavirus patients under quarantine who need their dogs walked.

"If I'm a doctor or nurse and... I'm cleaning up pee and poop and a mess, that's going to add to my stress and make me less effective at my job," Maher said, as a persistent basset hound led a yapping chorus behind him.

But Maher also said the company was calculating daily costs and revenues in New York's deteriorating conditions. By Friday, they realized they couldn't go on.

"We had no other choice," Maher said. He and his colleagues had begun offering clients alternative lodging.

The company had already trimmed headcount in half to about 110, but the latest move will leave staff at 37, Maher said.

Otto, part of celebrity restaurateur Joe Bastianich's empire, had in recent weeks seen a steep drop-off in reservations even before New York City shut restaurants for dining but permitted takeout.

Arnone's wife lost her job with a Manhattan hotel -- another hard-hit industry. The couple had been on his wife's company healthcare plan, a typical arrangement in the US.

Having already laid off most of its 45 staff, Arnone pared the menu at the Washington Square spot down to hearty pastas and pizzas, "comfort food" for a stressed-out moment.

But after three days, Arnone concluded the plan was unworkable.

"I just can't sustain it," he said Friday, adding that his immediate plans include filing for unemployment benefits, staying home with his wife and joining volunteer motorcyclists ferrying medical equipment to hospitals.